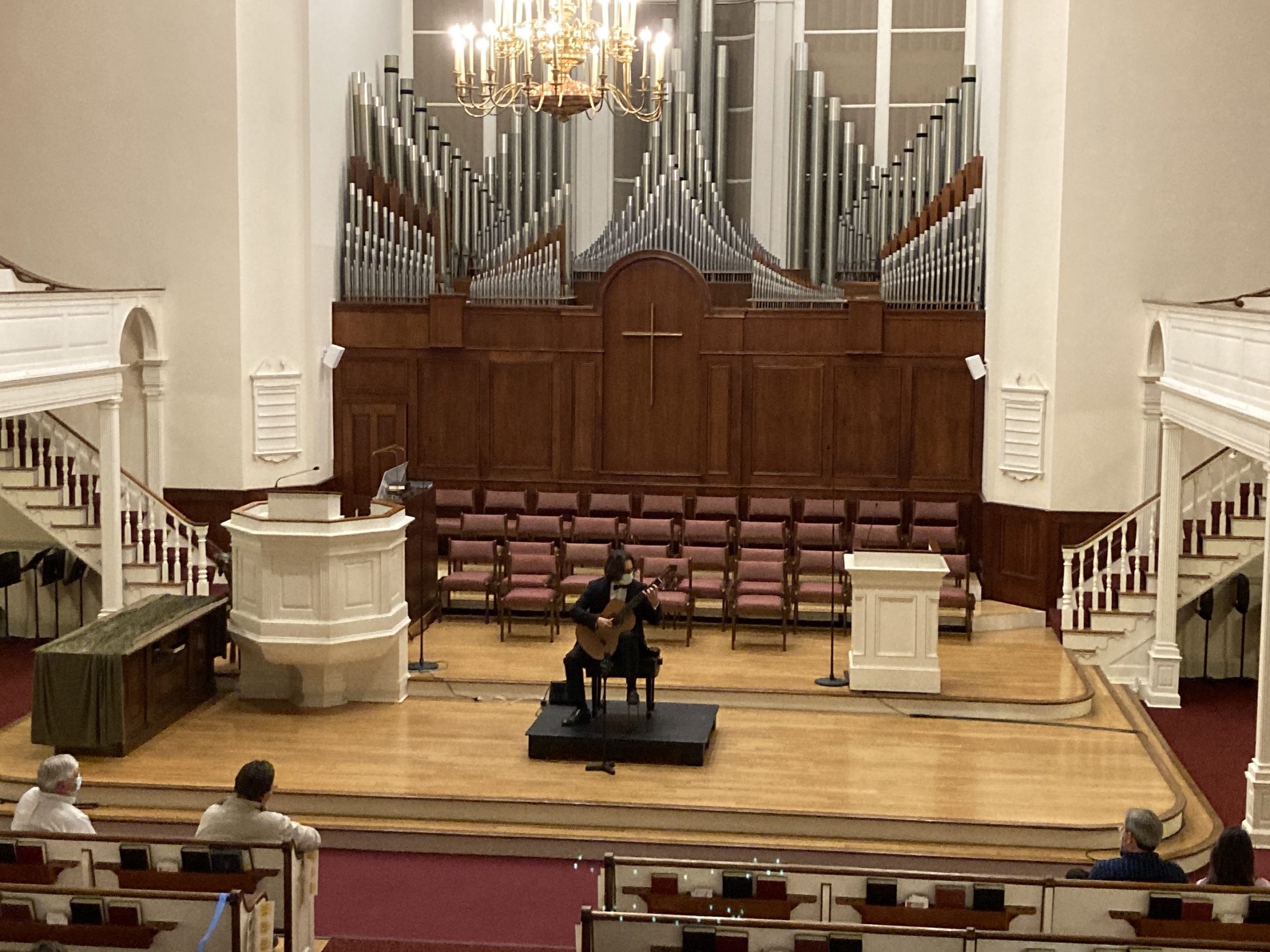 Like many of us, guitarist Celil Refik Kaya had a lot of time on his hands over the past eighteen months, and he used the opportunity to lean into another of his musical passions — composing. In his second-ever visit to the Cleveland Classical Guitar Society, Kaya brought the product of this extra time with him — the newly-composed Sketches, based on four works of visual art created by his father.

The Guitar Society’s executive director, Erik Mann, introduced Kaya by proclaiming that the audience would leave feeling addicted to his music, and his prediction wasn’t wrong. The process to get there unfolded over the course of the evening on Saturday, October 23 at Plymouth Church in Shaker Heights.

Before getting to Sketches, Kaya first flexed his musical prowess with four other pieces. In the aptly-named opener, Dionisio Aguado’s Introduction and Rondo, his assured phrasing and careful attention to dynamics allowed him to treat the increasingly complex variations with ease.

If Kaya’s playing could be summed up in two words, they would be fluidity and poise. This is precisely the way he approached Jean Baptiste Loeillet’s Suite in e, originally for harpsichord. Kaya’s transcription sounded natural on the guitar, maintaining the Baroque style through plaintive melodies and polished ornamentations.

Similarly, in Jorge Morel’s Sonatina, each musical gesture was tasteful and never overcomplicated. Morel is one of Kaya’s favorite composers, and he treated the music with reverence, leaning into the ebb and flow of the triplet figures for an effect that resembled rippling water.

Dense chord flourishes opened Isaac Albéniz’s Suite Española, a work that highlighted the guitarist’s technical skill. The music calls for many quick movements up and down the fingerboard that Kaya handled effortlessly. Several final-sounding moments led the audience to clap repeatedly between movements, but there was still plenty of applause at the end of the 30-minute piece.

After intermission, it was time for the composer to perform his newest work. The avant-garde nature of Sketches stood out from the rest of the program, but Kaya’s performance was no less engaging. The mysterious aura of the first movement led into a variety of unresolved arpeggios in the second, while engaging musical motifs characteristic of the Black Sea pervaded the final two. Clearly, Kaya is as conscientious with his composing as he is with his playing.

The program’s closer: his own short arrangements of Piazzolla’s Adios Nonino, Rio Sena, and Zita, presented as a suite. The guitarist reveled in the gorgeous lyrical melodies while adding tasteful vibrato. By contrast, the feisty third movement filled the large hall with some of the loudest dynamics of the night.

By the conclusion of Kaya’s brief encore, Agustín Barrios Mangoré’s cheerful Danza Paraguaya, almost two hours had passed — a bit long for a solo concert, though Kaya’s engagement with the music never faltered. Here’s hoping to see him back in Cleveland very soon.

END_OF_DOCUMENT_TOKEN_TO_BE_REPLACED

Rodgers & Hammerstein’s Cinderella was originally produced for television in 1957 — seven years after the animated Disney film was released — and starred Julie Andrews. According to the Rodgers & Hammerstein website, it was viewed by over 100 million people. END_OF_DOCUMENT_TOKEN_TO_BE_REPLACED

The story line has its origin in an 1855 play and an 1842 farce that Thornton Wilder mined for his 1938 play The Merchant of Yonkers. When that turned out to be a flop, in 1954 Wilder made the crucial decision to re-center the show around the character of the legendary marriage broker Dolly Gallagher Levi and renamed it The Matchmaker. END_OF_DOCUMENT_TOKEN_TO_BE_REPLACED

The Dodero Center for the Performing Arts at the Gilmore Academy in Gates Mills is one feature of an impressive campus. The auditorium is shallow, the stage is deep, and the ensemble played without a shell. Throughout the program, the sound, especially in instruments’ lower registers, tended to disappear. END_OF_DOCUMENT_TOKEN_TO_BE_REPLACED