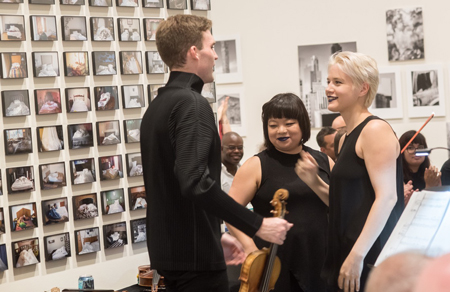 György Kurtág, unlike his friend and fellow Hungarian György Ligeti, never softened his composing style. While his early works were more or less tonal, Ligeti’s style turned to modernism in the 1960s before evolving to become considerably more approachable by casual listeners. Kurtág’s severely modernist music is austerely beautiful and darkly dramatic, perhaps more to be admired than loved.

Kurtág admired the writings of Franz Kafka, and over a period of 30 years he collected numerous short quotations, diary entries, and aphorisms, 40 of which he set as texts for Kafka Fragments. The movements range in duration from a few seconds to about six minutes. Although the work is written for a single violin and voice, Kenney and Lee split the movements, due to the phenomenal technical demands and the players’ other performing obligations during the Festival.

For the occasion, ChamberFest commissioned Kasumi to create 40 short films to accompany the musical fragments. Each of the films was preceded by the German title of the fragment, an English paraphrase of the text, and the title of the film.

The fragments are divided into four unequal sections, and the performance was difficult musically, confusing visually, sometimes comic, and textually alienating, all the while being completely transfixing.

Although the text and translations were printed in the program, the darkened gallery at Transformer Station made it impossible to follow along. The musicians were grouped behind most of the audience. I was seated toward the back and was able to see them, and their performance was nearly as visually dramatic as the films. (The players were revealed at the end, dressed in black and heavy goth makeup.) 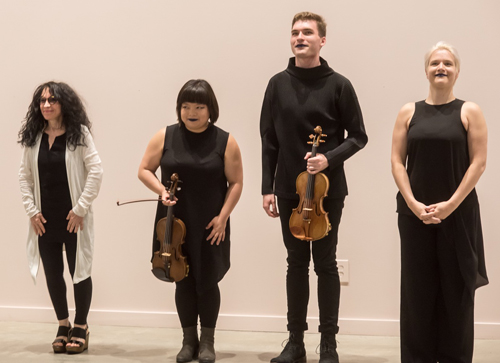 Kurtág’s music requires complete technical command from the musicians. The violins played the widest range of music, from gentle, simple melodic lines, to violent scraping of bow against strings. Lee’s and Kenney’s performance was unflagging in its energy and subtlety. Lauren Eberwein was billed as a mezzo-soprano, but her voice spanned multiple octaves, from a rich low contralto to dramatic soprano lines high above the staff, in jagged music far from standard tonality. The vocal part requires not just singing, but sudden transitions between song, speech, and scream, and that weird hybrid of speech-song that Arnold Schoenberg dubbed Sprechstimme.

There was rarely a moment for Eberwein to relax, and I marvel that I was hearing her second performance of the evening in this gargantuan work. Yet she sang with vibrant musicality. Her performance here whetted the appetite for what she will do with Arnold Schoenberg’s early masterpiece Pierrot lunaire — which still has the ability to shock over a century after its composition — at an upcoming ChamberFest concert next week.

Kasumi’s films for Kafka Fragments were arresting. There seemed to be some common themes that permeated the collection: time and its passing (or going in reverse); sleep and insomnia; walking, marching, strolling, and fleeing, but often with the dreamlike quality of not knowing the destination; and thoughts of violence, death, and suicide.

Much of the footage was from 1940s and 1950s black and white films, but greatly altered and mixed. There were actors who I thought I should know, whose “just barely familiar” faces were another disorienting element of the performance. The films, in combination with text and music, left me with more questions than answers.

All of the elements of this brilliant performance were intense and emotionally draining. But that did not dim the long and loud ovation at the nearly full Transformer Station.

END_OF_DOCUMENT_TOKEN_TO_BE_REPLACED

Rodgers & Hammerstein’s Cinderella was originally produced for television in 1957 — seven years after the animated Disney film was released — and starred Julie Andrews. According to the Rodgers & Hammerstein website, it was viewed by over 100 million people. END_OF_DOCUMENT_TOKEN_TO_BE_REPLACED

The story line has its origin in an 1855 play and an 1842 farce that Thornton Wilder mined for his 1938 play The Merchant of Yonkers. When that turned out to be a flop, in 1954 Wilder made the crucial decision to re-center the show around the character of the legendary marriage broker Dolly Gallagher Levi and renamed it The Matchmaker. END_OF_DOCUMENT_TOKEN_TO_BE_REPLACED

The Dodero Center for the Performing Arts at the Gilmore Academy in Gates Mills is one feature of an impressive campus. The auditorium is shallow, the stage is deep, and the ensemble played without a shell. Throughout the program, the sound, especially in instruments’ lower registers, tended to disappear. END_OF_DOCUMENT_TOKEN_TO_BE_REPLACED