The fourth in a series of articles highlighting ChamberFest artists 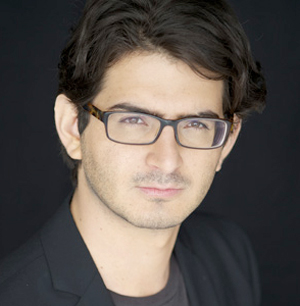 “The first time I improvised to a silent film I was frightened because I didn’t know if I could,” pianist-composer Matan Porat recalled during a Skype conversation from his home in Berlin. “And I picked the hardest movie there is, Fritz Lang’s Metropolis from 1927 — which is quite long.”

The evening will begin with composer-accordionist Merima Ključo’s performances of Jukka Tiensuu’s Aufschwung, and her own Ihtimanska Kopanica. Following the movie, Porat will team-up with his fellow ChamberFest pianists Roman Rabinovich and Orion Weiss for some comical works, including one for piano six hands. Popcorn and beverages will be served.

Matan Porat, who studied with Emanuel Krasovsky, Maria João Pires, and Murray Perahia, and earned his Master’s degree from the Juilliard School, began improvising to silent films on a whim. “It all started in the States at the Marlboro Festival,” he said. “The Festival has a tradition of improvising Happy Birthday for staff and participants who are celebrating birthdays during the summer. Since I am a composer and grew up improvising, every time someone had a birthday I would improvise on the song in completely different styles. One day Marlboro’s artistic director Richard Goode and I were talking about our love for movies and he asked me if I would be up to the task of playing for a silent movie. I was and I did, and now every festival asks me to do it.”

How much time does Porat spend watching a film in preparation for a performance? “Not much, I must say. Of course I need to know the structure of the film, and think about what direction I’m going to go musically. But of course every time is completely different.”

During his two previous appearances, Porat has improvised to Buster Keaton’s Sherlock Jr. (1924) and The General (1926). What does Porat find so attractive about Keaton films? “He was one of the great geniuses of his time. But it’s much harder to play for a comedy than it is for a slow atmospheric drama. And because Keaton’s films are so skillfully made, they are a challenge — I need to be extremely exact with how I fit everything he is doing on screen with the music. But I enjoy that challenge and now, I prefer improvising to comedies.”

Porat, who was part of the first ChamberFest, said that he looks forward to returning for a third time. “I really enjoyed the two seasons I was part of the Festival. Frank, Diana, and all the organizers do an amazing job. I remember being in awe during the very first season. From day one it was a feat of perfect organization. That’s not something that is easy to do.”

Matan Porat’s other ChamberFest performances include To My Distant Beloved on Friday, June 17 at 8:00 at Reinberger Chamber Music Hall at Severance Hall, and Isaac’s Dreams on Saturday, June 18 at 8:00 pm at the Maltz Performing Arts Center.

Jackson began the program with a recitation of Langston Hughes’ poem “Helen Keller” — the first of five poems by Hughes that served as interludes between each piece on the first half. END_OF_DOCUMENT_TOKEN_TO_BE_REPLACED

Pianos with pins and tape on strings, a bass drum and tam tam, crotales, Almglocken, and vibes. Microphones were hooked up all around the instruments. The feed was sent to speakers around the room. Lighting designer Nicholas Houfek hung incandescent globes over the arrangement of instruments from thin black wires stretching across the beams. END_OF_DOCUMENT_TOKEN_TO_BE_REPLACED

From the podium, Elim Chan set an ambitious tone for the evening. The rising star conductor, here in her Cleveland Orchestra debut, has a commanding style, and every twist and turn in Saturday’s performance tracked closely with her baton. END_OF_DOCUMENT_TOKEN_TO_BE_REPLACED