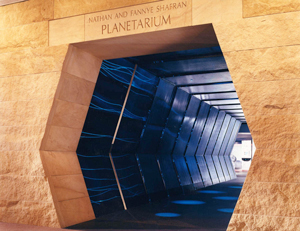 The wonderful Nathan and Fannye Shafran Planetarium at the Cleveland Museum of Natural History is an unexpected venue for a music critic. But after the Planetarium upgraded to a digital projection system in 2010, its manager Jason Davis started 360° of Sight + Sound: The Planetarium Project in collaboration with the Cleveland Institutes of Art and Music (CIA and CIM) to develop student-animated short films. The fascinating fourth iteration — titled “Through the Ages” — graced the inside of the dome on Wednesday, April 18.

The directors — Davis, CIA’s Hal Lewis and Anthony Scalmato, and CIM’s Bruce Egre, Keith Fitch, and Steven Mark Kohn — should be proud of the work their students created. The five short films by 14 animators, 5 composers, and 3 surround mix engineers were enjoyable to watch and hear. The overarching theme of time periods provided the half-hour showing a wonderful sense of shape and a strong showcase of the students’ talents.

Both Stone Age (by Kathryn Fischer, Jamal Gibson, and Hannah Obremski with music by Julián Fueyo mixed by Ophir Paz) and Industrial Age (by Maria Buchman, Joseph Williams, and Cassandra Yee with music by Qingye Wu mixed by Hudson Brett and Paz) featured a plethora of images. The sights of Stone Age’s immaculately designed fossil heads zooming forward and Industrial Age’s houses giving off chimney smoke unfurling around the dome won’t leave me any time soon.

Space Age — in the film titled Laika (by Shep Lemanowicz, Kimberly Moore, and Knox Price with music by Joseph Tolonen mixed by Paz) — was the most narrative-driven of the five. The delightful starring dog — the first animal to orbit the Earth — goes on an imagined space flight ending with a trip through a black hole.

Digital Age (by Taelor Benoit, Samuel Klug, and Alexander Marek with music by Timothy Reinholz mixed by John Konopka and Paz) also featured a major character: this time a floating robot. This film slowly moved through the different stages of our digital technology, upgrading the robot along the way, and ending with a wall of smart phones. Into the Future (by Wei-Chen Liu and Yifei Ma with music by Gabriel Novak mixed by Paz) featured a darkly warped vision of things to come, with beautiful, fantastical shots of cityscapes.

The animations were well made and designed to make use of the whole dome. The music was enjoyable and reminiscent of the visual elements — Reinholz’s Digital Age was notable in this regard — though often the animations needed more. Whenever a cartoon-style gag came on the screen, the music kept going its merry way. The only time when music and visuals directly synced up was in Laika when an alarm went off and the dog mashed a button to avert disaster. Having jokes fly by without producing giggles from the children in the audience — like when Laika fell in love with a gigantic bone-shaped rock — was a missed opportunity. Mickey-mousing is derided in composing circles, but it makes for better cartoons.