For the production’s debut in the John Patrick Theater on March 22, sopranos Paige Heidrich and Ciara Newman played the pair of sisters whose marital imperatives drive the drama: Carolina, the romantic lead, and Elisetta, her brattish comic foil. Costume designer Tesia Benson’s striking color-coded getups were mirrored by the door frames of each character’s bedroom, and by the projection screen at the back of the stage.

Carolina was pink, and Elisetta orange. Geronimo, their father (purple), blundered about issuing unheeded orders. Their aunt and head-of-household Fidalma (canary) sputtered and pined after Paolino, Geronimo’s personal secretary and Carolina’s secret husband of two months (mint). Count Robinson, a guest in the household (blue), maintained a calm demeanor amid his hosts’ infighting.

Paolino and Carolina — married, expecting, and afraid to confess any of this due to the former’s low station — find their secrets increasingly hard to keep as Fidalma unsubtly pursues Paolino. Meanwhile the Count, contracted to marry Elisetta but put off by her awkwardness, falls for Carolina. Resolution arrives only when the other characters discover the central couple in their attempt to escape unnoticed. 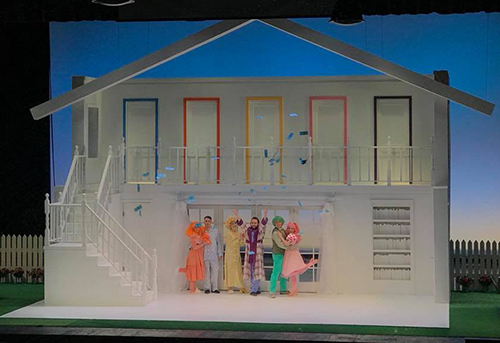 While Cimarosa’s operatic music has much in common with that of Mozart, who died two months before Il Matrimonio’s triumphant 1792 debut, it features fewer and briefer solo arias, ever building from recitatives toward ensemble numbers. The opera’s twists and turns of plot pale in comparison to those of, say, Le Nozze di Figaro, and a lesser production might drag. But with international rising star Noa Naamat in charge of stage direction, the drama proceeded at just the right pace, forward-driving and funny without lapsing into zaniness. If one element of the performance stood out, it was the brilliantly choreographed and executed action, which felt like a natural extension of the score and libretto.

Paige Heidrich sparkled as Carolina, navigating the part’s coloratura episodes with tireless agility. Her rejection of the Count’s advances in Act I found her ably wielding her voice, especially in the exchange in which she butchers several foreign languages. Ciara Newman’s Elisetta stole many scenes through a combination of charisma and comedic timing, and the soprano’s powerful voice, though not as flexible in Cimarosa’s more florid passages, fits lyric roles well. Few passages inspired as much laughter as the moment in Act II in which Elisetta attempts to divine what her cagey sister is up to, all the while singing to a bright orange teddy bear. 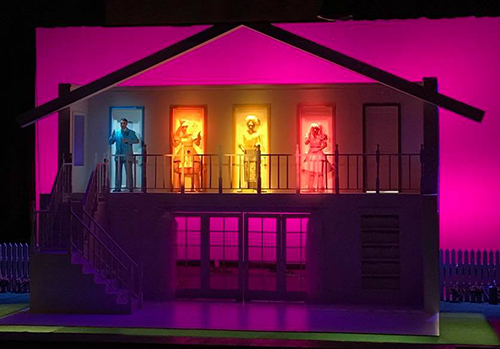 Tenor Ethan Burck had little time on stage as Paolino, but his voice rang out heroically whenever he appeared, his top notes strong and clear. Adriana Ellis’s velvety mezzo shone brightest in solo moments, and her tutting, primping, and harassing of Paolino helped make the character of Fidalma an essential part of the drama. As Geronimo, baritone Jake Dufresne’s pitch wandered during recitatives, but locked in for melodic passages. He went all in on the slapstick, buffo aspects of the patriarch. Guest baritone Ivan Plazacic, from Carnegie Mellon University, brought his resonant low register and authoritative air to the stage as the eternally confused Count.

The Baldwin Wallace Symphony Orchestra held its own under the assured baton of Tiffany Chang, though the violins faced some tuning woes late in Act II. Jason Aquila, the production’s music director and vocal coach, supplied fortepiano accompaniments that ranged from the tastefully sparse to the extravagant. Mary Grace Corrigan, Ciara Ferris, and Katherine Ferris were indispensable as the domestic servants — the production might have done more with these voiceless figures, clad in drab black and gray against the eerily perfect set (by designer Jeff Herman) and Day-Glo outfits of the principals.

BW’s Voice and Opera program and Department of Theatre and Dance have mounted a theatrical tour de force, and reminded Northeast Ohio audiences that opera can be fun — and hilarious.

The music isn’t easy to play, either. Over the course of two hours, all of the musicians brought fantastic focus to the unrelenting tricky rhythms and countless layers of parts, all of which require a high level of individual responsibility. Even in the moments of calm, the accompaniment remains perpetually unsettled. Adams — who made a sprightly presence on the podium — combines minimalist, repeating motives in gradual layers, which eventually become so dense they overwhelm the senses. Lisa Wong deserves special mention for her thorough preparation of the Cleveland Orchestra Chorus, as does Jennifer Rozsa for the Children’s Chorus, which made a brief but memorable appearance in the last few minutes. END_OF_DOCUMENT_TOKEN_TO_BE_REPLACED

Warner was a fitting choice not just symbolically, but also sonically. The combination of Baroque strings, theorbo, harpsichord, and organ created a nice blend and balance, allowing the opportunity for softer instruments to stand out. In Johann Rosenmüller’s Sonata à 5 in g, Doug Balliett’s violone pizzicatos resonated beautifully, and in Johann Heinrich Schmelzer’s Sonata in d, harpsichordist Elliot Figg became an equal player in the texture with his clever improvisations. The slight exception was Joshua Stauffer on theorbo — despite the instrument’s big physical presence on stage, he received little time in the spotlight. END_OF_DOCUMENT_TOKEN_TO_BE_REPLACED