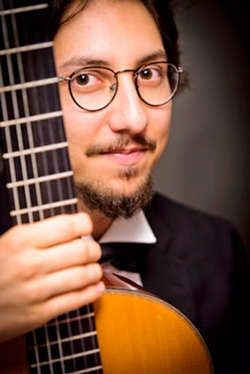 The Cleveland Classical Guitar Society will present a night of exotic guitar sounds across an eclectic range of genres, featuring renowned guitarist Celil Refik Kaya. Kaya makes his Cleveland debut on October 14 at 7:30 at Plymouth Church in Shaker Heights.

The program begins with works by Mauro Giuliani, as well as selections from J.S. Bach’s Goldberg Variations. Bridging the gap to the contemporary portion of the evening will be Kaya’s transcription of Enrique Granados’ Valses poéticos. The second half of the program includes Kaya’s own Sonatina and works by Jorge Morel and Joaquín Rodrigo. Click here for ticket information.

Born in Istanbul, Kaya made his concert debut at the age of 6. He was the First Prize winner in the 2012 JoAnn Falletta International Guitar Concerto Competition with the Buffalo Philharmonic as well as a top prize winner that same year at the Guitar Foundation of America.

Answering questions via email, Kaya described his early musical experiences. His father is a multi-faceted professional musician whose primary focus is the rebab, a traditional Turkish bowed instrument. “When I was a kid, he would often play classical guitar, and I was inspired by his playing. I tried to imitate and play every piece that he did. Eventually he became my first guitar teacher.” A graduate of Istanbul’s Mimar Sinan Fine Arts University State Conservatory, as well as Mannes School of Music in New York, he is the current recipient of the Harrington Fellowship of the University of Texas, where he serves as a teaching assistant in the studio of Adam Holzman.

When asked about Saturday’s program, Kaya said it features some of the most difficult works for classical guitar. His own composition, Sonatina in three movements. “I was inspired by various occasions in my life in New York City and Austin, Texas. The first and last movements have a surreal character, which represents human imagination and the fantastic inner world, while the second movement is more sentimental and represents such emotions as longing, love, passion, and disappointment.” The selections by Morel reflect Kaya’s enthusiasm for the composer. Kaya worked with him personally during his time in New York and has recorded several of his works for the Naxos label.

To close our conversation, Kaya revealed an interesting fact about his name, as well as the connection between his music and his heritage. “My mother saw my name in a dream when she was pregnant. I would say there is a great connection between my music and my heritage. Listening to traditional Classical Turkish music played by my father, uncle, and grandfather allowed me to be more expressive as a musician and colorful as a composer.”

END_OF_DOCUMENT_TOKEN_TO_BE_REPLACED

Rodgers & Hammerstein’s Cinderella was originally produced for television in 1957 — seven years after the animated Disney film was released — and starred Julie Andrews. According to the Rodgers & Hammerstein website, it was viewed by over 100 million people. END_OF_DOCUMENT_TOKEN_TO_BE_REPLACED

The story line has its origin in an 1855 play and an 1842 farce that Thornton Wilder mined for his 1938 play The Merchant of Yonkers. When that turned out to be a flop, in 1954 Wilder made the crucial decision to re-center the show around the character of the legendary marriage broker Dolly Gallagher Levi and renamed it The Matchmaker. END_OF_DOCUMENT_TOKEN_TO_BE_REPLACED

The Dodero Center for the Performing Arts at the Gilmore Academy in Gates Mills is one feature of an impressive campus. The auditorium is shallow, the stage is deep, and the ensemble played without a shell. Throughout the program, the sound, especially in instruments’ lower registers, tended to disappear. END_OF_DOCUMENT_TOKEN_TO_BE_REPLACED