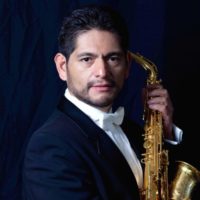 Last Saturday night at the Bop Stop saxophonist Javier Oviedo and pianist Ron Palka presented a lively concert of modern works as part of the Classical Saxophone Project. The highlight of the first half was Steven Cohen’s eclectic Sonata for Alto Saxophone and Piano. The cyclical 3-movement piece used modal elements with lowered second steps including a Hebrew scale. Oviedo displayed excellent dynamic control throughout.

Lively counterpoint between the soloists prevailed in the first movement. Palka’s left hand took the lead in the second theme, accompanied by subsidiary lines in the saxophone. The slower second movement used a modal mixture, intermingling major, Lydian, and Mixolydian fragments. The soloists articulated the syncopated rhythms with excellent precision.

The longer third movement began with the syncopated element, used a six-eight meter as transition, and finally landed on a prevailing Brazilian samba pattern. Both players greatly varied their articulations, and cleverly reserved their most staccato moments for climaxes. It was an outstanding performance.

The performance of Paul Hindemith’s Sonata highlighted the second half. It has become a staple of the alto saxophone repertoire, even though originally composed for alto horn.

The slow and declarative first movement soon led to a rapid rondo. Here the performers made lively exchanges. An interesting section in which both played low register figures added an intriguing tone color. Ensemble was outstanding, and the duo maintained clarity despite the low range. The soloists contrasted two distinct ideas in the slow movement, leading to an almost bluesy section at the conclusion.

The finale began with Oviedo reading Hindemith’s text evoking “pallid yearning and melancholy longing.” Palka replied, “Your task it is, amid confusion, rush, and noise, to grasp the lasting, calm, and meaningful, and finding it anew, to hold and treasure it.” Oviedo responded to Palka’s rapid figures with a very lyrical melody recalling the opening movement, but now in a more outgoing mood.

The Duo ended with the lilting Brasiliera from Darius Milhaud’s Scaramouche as an encore, and received a standing ovation from a grateful audience.