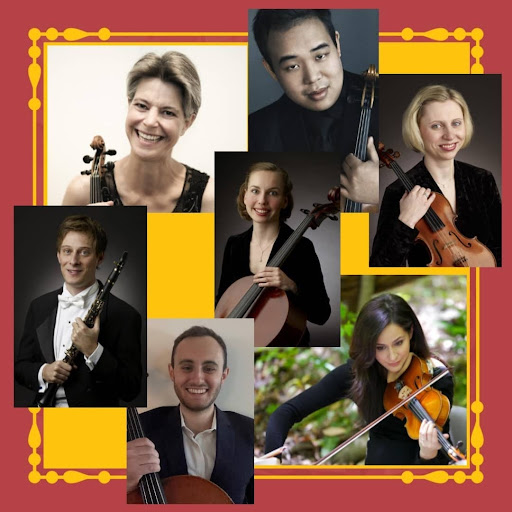 At first glance, the inclusion of Dvořák’s String Quartet No. 6 in F Major, “American,” might seem out of place on a program dedicated to historical Cleveland composers. But the concert’s curator, Cleveland Orchestra violinist Isabel Trautwein, posed a question to the audience. Why has this work become so well-known, while other pieces — like the ones on this concert — have not?

Trautwein’s question left lots of food for thought over the course of “Honoring Our Past Masters: The Golden Age of Cleveland Art, 1900–1945,” on Saturday afternoon, December 4. The five pieces provided just a taste of the rich variety of music written by those who have called Cleveland home.

The parlor room of the Hay-McKinney Mansion, tucked away inside the Cleveland History Center, offered an intimate, close-up setting for the full house of attendees. Cavani Quartet violist Eric Wong joined Cleveland Orchestra members Trautwein, violinist Katherine Bormann, and cellist Tanya Ell for the opening Dvořák, which was awash with graceful, elegant melodies and a rich, resonant group sound.

The concert led elegantly into the Past Masters with music from one of Dvořák’s students: Charles V. Rychlik, who himself taught thousands of violinists in the Cleveland area. Forty of them went on to become some of the first members of The Cleveland Orchestra. Though Rychlik was known for composing volume upon volume of dry technical exercises for his students, his Sonata for Violin and Viola is full of vibrant, sweeping melodies reminiscent of the composer’s Czech mentor. Trautwein and Wong seamlessly traded off primary and secondary voices, with a great blend in their unisons and harmonies.

Johann Beck, another of Rychlik’s teachers, received rave reviews for his 1888 Sextet for Strings — yet the work remained lost for decades until it was recently uncovered in the Cleveland Public Library’s Special Collections. Violinist Alicia Koelz and cellist Yann Chemali joined the opening four players, with Trautwein moving to viola, and the ensemble embraced the piece’s full-bodied texture inspired by the grand German Romantic tradition that Beck so admired.

The middle of the program introduced clarinetist Robert Woolfrey during the enigmatic Quintet for Clarinet and Strings by Douglas Moore, who was the organist and music director of the Cleveland Museum of Art from 1921-25. That transitioned smoothly into former Cleveland Institute of Music director Ernest Bloch’s Paysages (Landscapes) for String Quartet, with the eerie harmonics of the first movement invoking images of a barren Arctic landscape. While the second movement gingerly opened the door to a wider, richer sound, the third blew it right open, with a vivacious intensity from the musicians that prevented the earlier movements from feeling bogged down.

Trautwein and her fellow musicians saved the most intriguing programming choice for last: two selections from the photoplay music of native Clevelander John S. Zamecnik. Originally composed to accompany silent film, these pieces easily stood on their own, conjuring up images of lamentations in The Sacrifice and vicious thunderstorms in Storm Music even without the visual element. Compelling and thrilling, Zamecnik’s work made a welcome addition to a jam-packed hour of music.

The music isn’t easy to play, either. Over the course of two hours, all of the musicians brought fantastic focus to the unrelenting tricky rhythms and countless layers of parts, all of which require a high level of individual responsibility. Even in the moments of calm, the accompaniment remains perpetually unsettled. Adams — who made a sprightly presence on the podium — combines minimalist, repeating motives in gradual layers, which eventually become so dense they overwhelm the senses. Lisa Wong deserves special mention for her thorough preparation of the Cleveland Orchestra Chorus, as does Jennifer Rozsa for the Children’s Chorus, which made a brief but memorable appearance in the last few minutes. END_OF_DOCUMENT_TOKEN_TO_BE_REPLACED

Warner was a fitting choice not just symbolically, but also sonically. The combination of Baroque strings, theorbo, harpsichord, and organ created a nice blend and balance, allowing the opportunity for softer instruments to stand out. In Johann Rosenmüller’s Sonata à 5 in g, Doug Balliett’s violone pizzicatos resonated beautifully, and in Johann Heinrich Schmelzer’s Sonata in d, harpsichordist Elliot Figg became an equal player in the texture with his clever improvisations. The slight exception was Joshua Stauffer on theorbo — despite the instrument’s big physical presence on stage, he received little time in the spotlight. END_OF_DOCUMENT_TOKEN_TO_BE_REPLACED