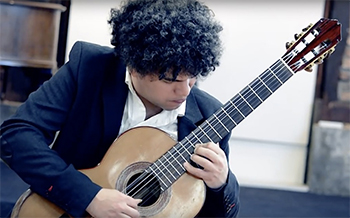 The decision to pursue the path of a professional musician came late for Judicaël Perroy. “I didn’t decide until I was in my twenties,” the French-born guitarist wrote in an email. Perroy, who serves on the faculty at the San Francisco Conservatory, said that although he learned to play the guitar early in life, he was always interested in other subjects while he was in school. “I was kind of a child prodigy and everybody thought that I would become a guitarist. So I decided late because I wanted it to be my decision.”

On Saturday, April 27 at 7:30 pm in Plymouth Church, Perroy will make his Cleveland debut with a concert featuring works by Bach, Sor, Mertz, Villa-Lobos, and Albéniz. The concert is presented as part of the Cleveland Classical Guitar Society’s International Series. Tickets are available online.

The following is an edited transcript of our conversation:

Mike Telin: You have a wonderful program. How did you decide on these pieces?

Judicaël Perroy: It’s difficult, but normally I try to choose pieces that I would like to listen to if I were in the audience. I also try to select pieces that fit together well. That is a more mysterious process. Sometimes great pieces are fighting with the others and simply don’t fit on the program.

MT: Please give me your thoughts about each of them.

JP: I am considering playing the full Suite instead of just the “Prelude and Fugue.” I have played this Suite in recital for 34 years — more than any other work.

The lute suites are part of me, and I feel like they are always new because, like with any of the masterpieces, there are an infinite number of perspectives to take. I have been listening to Beethoven’s piano sonatas for 30 years and I feel the same way about them.

JP: It’s fun to play because it’s light and I like the czardas rhythm. The piece is linked to my youth because I used to be crazy about György Cziffra’s recording of Liszt’s Hungarian Rhapsodies. So now as a mature player it is fun to see what I can do with it.

JP: I am only playing the Valse and Mazurka. They are technically easy, so they are often performed badly by less advanced players in music school. Because of this I never considered them as concert pieces until I heard Denis Azabagic play Villa Lobos’ Prelude No. 5 — which is the same situation — and I realized that he composed some major pieces for the guitar.

JP: This is a major piece for the guitar and one of my favorites — I love its Spanish flavor combined with French impressionist influences. I have given many classes on it to some great students, and after years teaching it so much, I decided to work on it myself. I was curious to see how I would approach it after having given so much advice about it.

JP: I’ve played it forever and I want to finish with a virtuosic piece that everyone knows.

MT: You’ve said that the decision to be a musician was linked with being a teacher. Will you please say more?

JP: Teaching is probably the most important thing to me. If I had to choose between teaching and playing I would choose teaching. For me it is more rewarding. It is easy to say now because I have super good students in San Francisco, but I was thinking the same thing 20 years ago when I had so many beginners. Since then many of my students have become teachers and/or performers. They all play very differently than I do. I don’t like to teach pieces the way that I play them, so when I listen to them, I totally forget that I was their teacher. I like this a lot because I can just enjoy the concert.

END_OF_DOCUMENT_TOKEN_TO_BE_REPLACED

The strings-only work by Berg has made relatively frequent appearances on the Orchestra’s programs. In 2021, the musicians recorded it for the In Focus series, and it appeared again on last year’s European tour. Friday’s rendition maintained the group’s characteristic light and effortless playing, each section blending as much as possible to echo the work’s original form as a string quartet. At fifteen minutes total, the piece is quite short, but the dense encoded musical meanings require some extra-attentive listening. Splitting up the three movements ensured that each one could be appreciated on its own. END_OF_DOCUMENT_TOKEN_TO_BE_REPLACED