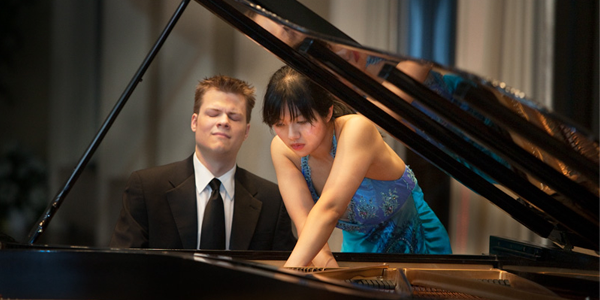 The two became fast friends and soon discovered that they had a shared mission for their musical lives: to make classical music a relevant and powerful force in society. “Both of us had big dreams of how to do that,” Roe said during a recent joint telephone conversation with Greg Anderson. “So we both unexpectedly found the perfect partner in crime.”

On Saturday, July 30 at 8:00 pm at the Maltz Center for the Performing Arts, the dynamic piano duo Anderson & Roe will make their Cleveland debut as part of the Cleveland International Piano Competition and Festival. Their program will include Mozart/Busoni Duettino Concertante, Ravel’s La Valse, Rachmaninoff’s Suite No. 1 “Fantaisie-tableaux,” and three tangos by Piazzolla. The evening will also include their own arrangements of music by Radiohead and Daft Punk.

Roe noted that they like their programs to be a balance of canonic works in the repertoire and their own arrangements of popular songs. “This is all about our mission to represent the vast range of the human experience,” The Chicago native said.

Anderson, who hails from St. Paul, Minnesota, pointed out that their program will include a set of chaconnes. “There’s a Ligeti chaconne, and one from Radiohead’s “Paranoid Android,” along with another one that we created based on Daft Punk’s Loose Yourself to Dance. It’s a really wild genre-bending set of pieces.”

Mike Telin: What do you look for in a pop song?

Greg Anderson: It’s very different in every instance. For example, Michael Jackson’s Billie Jean marinated in my mind for a couple of years. At first I thought it would be a terrible piece to arrange for two pianos because there’s no way we could recreate Michael Jackson’s iconic voice and that irresistible dance track. But in talking with Liz, we began to hone in on some things —like we were attracted to the dark, sinister nature of the music video, and Michael Jackson’s use of rhythm. With those big concepts in mind, we finally wrote the arrangement.

In the case of the Radiohead we both thought it was so symphonic that it could receive an orchestral arrangement and interpretation. With Loose Yourself to Dance, the piece is based on ‘70’s disco music, but it’s fused with an almost classical/minimalist aesthetic. And hearing it for the first time we were struck by their influence on classical music.

Liz Roe: We’ll also choose songs based on a certain programming concept. For instance, we have an album of night songs — When Words fade (Night Songs for Piano Duo) — so we searched for pieces that would apply to that theme, regardless of the genre that they come from.

MT: I understand that you played your first concert together while you were still at Juilliard.

LR: We performed our first recital fourteen years ago. It was such a blast and we had so much fun on stage that we looked at each other and thought that “maybe we should do this more.” Actually when we were still at Juilliard we started getting recommended for all these gigs, and from there our reputation started to expand. We also realized that we both had so many ideas, like “let’s make videos!”

MT: Speaking of your videos, I really like them all, especially The Rite of Spring.

LR: The whole reason behind us making our own videos is that we couldn’t afford to hire people. But we had the desire, so we just made it happen by being resourceful and figuring out how to edit film. The Rite of Spring video is another example. We thought, “Oh the centenary of the piece is coming up. Why don’t we do a video of the whole 35-minute work?” We love to take risks onstage, but for that video we took a lot of risks. Greg had to go to the emergency room because he injured his toe during filming when we were sacrificing the piano at sea.

GA: Sacrificing a piano at sea was one of the strangest things we’ve done. But we had the elements of water and fire as part of the narrative. For me, it was inevitable, so I said “we have to drown it in the ocean,” and Liz said “no, that’s a terrible idea.”

LR: I somehow got overruled.

GA: What I failed to consider is that the ocean has powerful waves, so naturally they shoved the piano all over the place including onto the two if us and over my toe, ripping off the toenail. That was right at the start of the shoot so we just had to keep going because we were not going to get a second chance.

LR: Equally extreme was us filming with the piano in the desert. We threw gasoline on it and torched it and it was quite windy.

GA: We were trying to play it with the fire blowing. During the editing I had to be very selective, because the two of us were both holding our hands back from the flames.

MT: Wow, that’s amazing. On another topic, did you both study arranging?

GA: We have not taken any composition or arranging courses, only theory. Again, it all started by necessity in that we wanted to play music for four hands, but the bulk of the repertoire is skewed toward music for children, or for the concert stage. So we needed better repertoire for our purposes. I actually composed and arranged music for the Five Browns, and after writing music for five pianos, writing for two pianos or four hands comes pretty easily.

LR: Yes, but it does require that you use a different part of your brain. I really admire that Greg has the wherewithal to deal with all the complexities — for two pianos especially. We’ve fallen in love with the genre, although initially neither of us was attracted to it. A lot of the music, especially for four hands, is a little precious.

GA: And a lot of the repertoire for two pianos can sound a bit dated.

LR: As pianists, we are naturally exposed to some of the best musical writing on earth, so when playing a piece by Brahms or Rachmaninoff we can learn a lot about how to write for the instrument. We’re also very affected by music of other genres, so listening to how Radiohead treats a song — or just a well-crafted pop song — you can get inspiration from that as well, and then try to infuse that into a classical style. That will hopefully give it a less dated, less kitschy feel. Even if it is an arrangement of something from the nineteenth century, we want it to feel a little bit modern, and something that can appeal to a contemporary audience.

Supported by engagingly, yet simple staging by Cara Consilvio, a well-prepared cast of singers told the archetypal story of Cinderella with charm and flair. Framing the production was  a sparse but colorful set and wonderful lighting by Dave Brooks. END_OF_DOCUMENT_TOKEN_TO_BE_REPLACED

END_OF_DOCUMENT_TOKEN_TO_BE_REPLACED

The music isn’t easy to play, either. Over the course of two hours, all of the musicians brought fantastic focus to the unrelenting tricky rhythms and countless layers of parts, all of which require a high level of individual responsibility. Even in the moments of calm, the accompaniment remains perpetually unsettled. Adams — who made a sprightly presence on the podium — combines minimalist, repeating motives in gradual layers, which eventually become so dense they overwhelm the senses. Lisa Wong deserves special mention for her thorough preparation of the Cleveland Orchestra Chorus, as does Jennifer Rozsa for the Children’s Chorus, which made a brief but memorable appearance in the last few minutes. END_OF_DOCUMENT_TOKEN_TO_BE_REPLACED