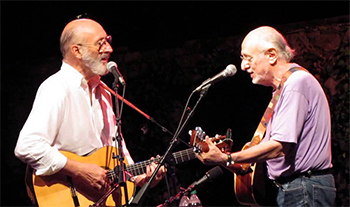 The folk group Peter, Paul and Mary first came to Blossom Music Center in the summer of 1969 near the peak of their fame  – Leaving on a Jet Plane reached number one on the Billboard Hot 100 later that year. Now 50 years later, the return of the group’s living members on Sunday, July 7 made for a sweet, nostalgia-filled evening as they performed with The Cleveland Orchestra, conducted by Lucas Richman. Playing some of the trio’s most well-loved songs, Peter Yarrow and Noel Paul Stookey maintained the group’s longtime progressive political edge.

The show was engaging and emotional. Yarrow and Stookey introduced songs with witty jokes and earnest calls for understanding amidst political barbs — Stookey took on the voice of the dragon Puff decrying those attempting to build a wall around Honah Lee. This was clearly a folk show with communal singing galore, the audience regularly joining in during their famous songs, from Puff the Magic Dragon, to Where Have All the Flowers Gone, to If I Had a Hammer. Yarrow lined out less familiar ones so people could keep singing. The experience felt whole, even though it wasn’t complete without Travers’s beautiful voice.

The songs spanned the group’s career from the early sixties until Travers’s death in 2009, and included what appeared to be a new song by Stookey. The arrangements were fitting and supported the collective singing. Providing pleasant accompaniment all evening, Richman and the Orchestra got one feature in honor of Travers. They played Samuel Barber’s Adagio for Strings — performed at the singer’s memorial ten years ago — with great care.

Both Stookey and Yarrow are 81 and still capable and engaging musicians. If Pete Seeger is any measure, we may be granted another decade with them both. After intermission each had a chance in the solo spotlight, accompanied by upright bassist John Miller. Yarrow led the audience through the call-out number Listen Mr. Bigot, which still has an important message.

Stookey showed off his guitar-picking skills in an enjoyable bluesy number, which must be new — the title appeared to be Let’s Talk About Love in the Uppercase. And then he played his deservedly famous Wedding Song (There Is Love), replacing the familiar phrase “He is now to be among you” with the words “I am now to be among you.”

The concert was a pleasantly unsettling experience brimming with emotion. I knew more of the songs than I expected, and Garden Song — one that my father, an amateur folk guitarist, regularly sang when I was a child — had me instantly in tears.

The ending mixed sweetness and uplift with recognition of the current political reality. Woody Guthrie’s This Land Is Your Land has become a fierce patriotic anthem. Yarrow and Stookey are reminders that raising up voices collectively in song is also to engage collectively in the struggle.