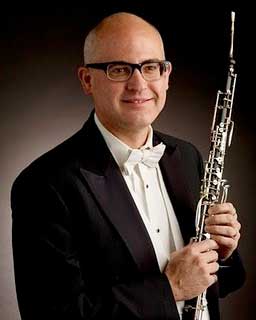 The 8:00 pm concert, under the direction of Lionel Bringuier, will also feature Claude Debussy’s Prelude to the Afternoon of a Faun, and Hector Berlioz’s Symphonie fantastique. The program will be repeated on Saturday, November 28 at 8:00 pm, and Sunday, November 29 at 3:00 pm.

The concerto was commissioned by the Oberlin Conservatory of Music in celebration of its 150th anniversary. To learn more about the origin and scope of the commissioning project, read an article originally published on the Conservatory’s website.

We asked the soloist and composer to expand on their thoughts about the new concerto. The following are excerpts from those telephone conversations.

Mike Telin to Robert Walters: Is there something about Bernard Rands’ music that has always attracted you?

Robert Walters: To start with, his music has a Ravel-Debussy feeling. His Concertino for Oboe uses the same instrumentation that Ravel did for his Introduction and Allegro — flute, clarinet, harp, and string quartet — plus solo oboe. Rands’ music starts there and goes down the block much further. It’s almost post-modern impressionistic, and I’ve always been fascinated by his particular blend of tradition and extension. 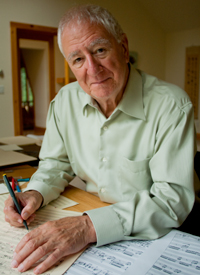 MT to Bernard Rands: I understand you first met Robert when he was a student at Curtis and that you have been waiting for the opportunity to write a concerto for him.

Bernard Rands: Our paths crossed in Philadelphia only in the sense that he was a fairly frequent visitor to the orchestra, and he played with the orchestra in at least one of my works that Riccardo Muti conducted. That’s when my old relationship with Robert’s playing began.

But probably twenty years later he performed my Concertino for Oboe at Oberlin. I heard the recording and it was fantastic. Then my wife, Augusta Read Thomas, wrote Pilgrim Soul, a work for English horn and two violins, and Robert and two members of The Cleveland Orchestra played and recorded it. At that point I said that I was going to tell Robert that I must write a concerto for him, and I did.

MT to RW: Can you describe the process of working with Bernard on the concerto?

RW: It was fun. We both brought a lot of curiosity and openness to the collaboration. I think he knew my playing quite well through recordings. I also gave him recordings of other concertos I had performed with Cleveland and other orchestras, and he listened to them very attentively. He was also curious to hear my thoughts about the instrument and what I thought I was good at — what I liked or didn’t like to do.

He gave me several of his recordings as well, including the premiere of his piano concerto with Jonathan Biss and the Boston Symphony. So I had a lot of his music in my ear.

I remember when he finished the second movement of my concerto, which was the first movement that he completed. It’s transporting and ravishingly beautiful. He always wanted to make sure everything felt comfortable — technically and expressively. When we couldn’t get together in person he would email me sections of the solo part and ask if I could try it and whether it would work for me. ‘Am I asking too much?’ he would say. Very rarely did I ask for anything to be changed. On occasion I would make a suggestion about tempo or tell him that I could play that high note but it might not come out at that dynamic marking. We exchanged thoughts that way, but largely I trusted him to write it and he trusts me to play it.

MT to BR: Can you say a few words about your concerto?

BR: It’s a conventional concerto in the sense that it has three movements, fast-slow-fast.  But the three movements — Fantasia, Aubade, and Hommage à C-AD (Claude-Achille Debussy) — don’t follow traditional constructs, so it is brand new in that sense.

The duration is around 25 minutes, and it’s scored for what I call standard large orchestra: triple winds, brass, three percussion, harp, and full string section.

MT to BR: Were there any potential pitfalls you needed to be aware of when writing a concerto for English horn and large orchestra?

BR: There are pitfalls every time you sit down to compose [laughing]. But there’s the obvious one of audibility when you have a single instrument against an 85-player orchestra. But in fact, the English horn is not easy to cover because it has a poignant sound that carries well over the orchestra. Even when it plays within the wind section, you can always hear it.

MT to RW: Do you have any concerns about balance?

RW: I have total confidence in Bernard’s ability and I think he was very careful not to overwhelm me. It’s a big orchestra but he only pulls out all of the stops in between the solo passages. I’ve played through it with the piano part, and I’ve got a good sense of the architecture of the piece and what’s happening underneath me. But we’ll see what it’s like when we get into the big room with everyone on stage.

MT to RW: Placing the concerto between Afternoon of a Faun and Symphonie fantastique makes for a perfect program. Who made that decision?

RW: It was Mark Williams, the Orchestra’s artistic administrator, who coordinated the program. When Oberlin went to the Orchestra with the idea of the commission, they thought it was fantastic. The next step was to find a conductor, then to choose the program and find a date. It’s a big puzzle matching the conductor and soloist and repertoire.

I met Lionel Bringuier when he conducted here last year. We talked about the concerto but he did not know Bernard’s music, so I sent him a score. He said, “This looks fascinating. Let’s do it.” I don’t know how they made it happen, but everything from the conductor to the other pieces could not go more perfectly with this concerto. I know that when Bernard saw what his concerto was going to be sitting between, he couldn’t have been happier.

MT to RW and BR: The commission for the concerto is in celebration of the 150th anniversary of the Oberlin Conservatory. That must make these concerts even more special.

RW: When I think about it, I really do get choked up. I cannot express how much this means to me. When Dean Andrea Kalyn said we should do it as part of the anniversary celebration I thought it was a brilliant idea. It’s so humbling for me to have one event that includes both institutions that I spend my life serving.

What was so nice about the way this came about is that when I mentioned Bernard Rands to Andrea, she said, ‘Oh my, I love his music, and I can totally see the two of you working together.’ And when I mentioned his name to Mark Williams, he looked at me and said, ‘A Rands English Horn concerto — that’s the way to go.’ So it kind of locked in from many directions all at once. It was almost inevitable.

BR: I was astonished to hear that Oberlin was that old, and I was touched that they would make this possible for Robert and for me. I hope we’ve done well for them celebrating such a long and distinguished institution.

Click 112315RandsWaltersPrev for a printable copy of this article

END_OF_DOCUMENT_TOKEN_TO_BE_REPLACED

Supported by engagingly, yet simple staging by Cara Consilvio, a well-prepared cast of singers told the archetypal story of Cinderella with charm and flair. Framing the production was  a sparse but colorful set and wonderful lighting by Dave Brooks. END_OF_DOCUMENT_TOKEN_TO_BE_REPLACED