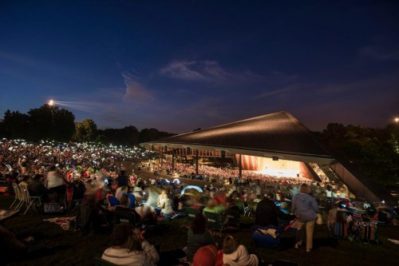 The evening was filled with excitement and verve — a bounty of essentially three concerts in one. At 7:00 pm, Cleveland Orchestra associate conductor Brett Mitchell led the Kent/Blossom Chamber Orchestra in works by Andrew Norman and Beethoven. Then at 8, Hans Graf led The Cleveland Orchestra in Hindemith and Mozart. At 9, both ensembles joined forces for a rousing performance of Tchaikovsky’s Sixth Symphony.

Andrew Norman’s The Great Swiftness (2009-10) saturated the stage with its architecturally inspired soundscape. The five-minute work tests the endurance of the ensemble, but the Kent/Blossom students never wavered, demonstrating Norman’s orchestrational feats of range, dynamics, and long tones. Another notable technique was the use of bass bows on the antiphonal vibraphones, whose sound forged a metallic sheen that glinted and gleamed throughout the pavilion.

Beethoven’s penultimate symphony, the second he had written in F Major, was a fitting choice for the chamber orchestra. While it’s firmly in the standard repertoire, Mitchell and the Kent/Blossom ensemble brought a freshness to the piece that is not often heard. Their spirited presentation and the perfect balance between winds and strings were especially refreshing.

The pairing of The Great Swiftness with Beethoven’s Symphony No. 8 seemed naturally symbiotic. The well-executed dynamics in the Beethoven could be perceived as a macro motive, an overarching structure similar to the soundscape in the Norman.

After intermission, Hans Graf and The Cleveland Orchestra took the stage for a performance of Hindemith’s Cupid and Psyche: A Ballet Overture, a rarely performed work that clearly belongs in the standard repertoire. While Hindemith didn’t go on to write an actual ballet score, the composer adeptly evoked the atmosphere of a ballet and explored character development in the Overture.

An interesting feature of the orchestration highlights the solo violin amidst a barrage of other instruments (the timpani may have overstepped the dynamic range in several instances, otherwise, the balance was impeccable). Also striking: the muted viola paired with bassoon, and the ending, featuring triangle and flute, which whimsically foreshadows the dancers who would have entered had the ballet been completed. 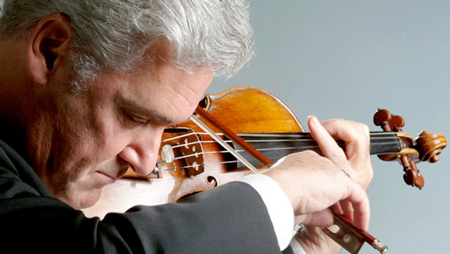 Pinchas Zukerman’s performance of Mozart’s “Turkish” Violin Concerto was absolutely charming. He assumed the role of storyteller, captivating the audience with his swashbuckling tales and “Turkish delights.” Zukerman has graced stages all over the world for over four decades, and his performance Saturday night represented the hallmark of what makes Mozart magical.

When the Kent/Blossom Chamber Orchestra joined forces with The Cleveland Orchestra, the performance of Tchaikovsky’s Sixth Symphony (“Pathetique”) was monumental, brooding, reflective, and unabashedly human. The audience, unable to contain itself any longer, applauded briefly but vigorously after the third movement. Hans Graf graciously acknowledged their response with a whimsical smile.

The combined ensembles were a force of man versus nature. Any audiophiles would have thought they had died and gone to heaven.

END_OF_DOCUMENT_TOKEN_TO_BE_REPLACED

Franz Welser-Möst led the final bows on Saturday night at Severance, like the star of any show should. The Cleveland Orchestra’s music director is in his element presiding over the ensemble’s annual opera production, which this season packs the drama. Verdi’s Otello — in a concert staging that opened May 21 and runs for two more performances (May 26 and 29) — demands big voices, instrumental forces to match, and a conductor who can give it all shape and direction. END_OF_DOCUMENT_TOKEN_TO_BE_REPLACED

The cimbalom was the feature of the show, an instrument capable of taking on many personas. Its performer, Chester Englander, has shaped his career around the instrument, and has inspired composers to write more repertoire for it, some of which was presented on the program. END_OF_DOCUMENT_TOKEN_TO_BE_REPLACED