by Colin Roshak
Special to ClevelandClassical.com

This past Friday, in a night of highlights — a young virtuoso soloist, a powerhouse horn player, and an astonishing young ensemble — the Cleveland Orchestra Youth Orchestra more than earned their stage time in the legendary Severance Hall. The concert began with a modern selection in Sarah Kirkland Snider’s colorful Something for the Dark, a sort of concerto for orchestra. Each section enjoyed its moment to shine as the piece cycled through a series of themes and rhythmic variations. It begins with an ethereal high note played by a single violin, and expands into a Mahlerian world of sound and textures.

Cello soloist Annie Zhang brought superlative playing to Shostakovich’s First Concerto, which begins in the cello with a driving sixteenth-note figure that returns throughout the piece. Her sound was clear and pointed, and embodied the militaristic quality of Shostakovich’s writing. 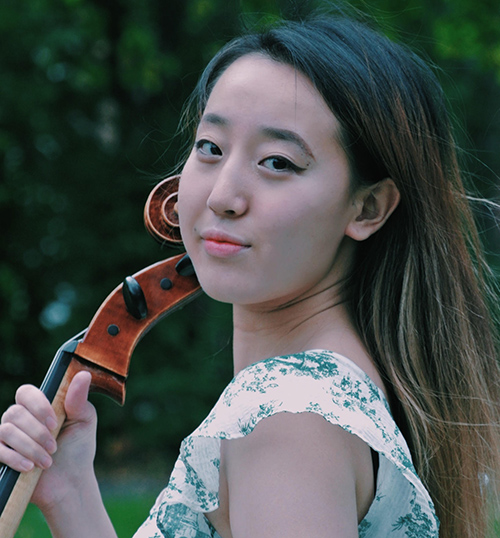 The long slow movement and cadenza were a respite from Shostakovich’s unrelenting intensity. Zhang played with precise intonation and long, elegant phrasing during her  counterpoint with the orchestra. In the finale, a set of variations on the opening theme from the first movement, cataclysmic wind lines clash against the labored sixteenth notes in the cello and syncopated, pizzicato hockets in the strings. Again Zhang played with exacting technique and an intensity of sound that matched Shostakovich’s Soviet angst. The orchestra met Zhang’s energy and, under music director Vinay Parameswaran’s attentive direction, never once overpowered the solo line.

When it comes to concerti, there’s always the question of who’s the boss. Just ask Bernstein and Glenn Gould. In the case of the Shostakovich, it was actually the astonishing obbligato horn soloist Hyejin Suzie Lee, who played with an incredible depth of sound, and power that filled every inch of the hall. This sort of maturity and command of the notoriously temperamental instrument is rare in a high school horn player, and Lee made the most of every moment.

The evening concluded with a triumphant rendition of Jean Sibelius’ Symphony No. 2. No matter how familiar one is with the piece, the Second always presents as new and vibrant. Sibelius crafts a world of sound that combines his colorful harmonic language with folksy melodies and rich orchestration. The first movement is an energetic display of characters dancing, colliding, and spinning around one another. The winds snarl at the strings, the brass represent a conquering hero, and dramatic timpani rolls punctuate the drama.

The final movement arrived attacca and unleashed from the tumult of the third-movement vivacissimo. The conclusion followed a series of increasingly dramatic climaxes, and the music ascended to the heavens with one final victorious statement.

The opaque and transparent quality of some of Sibelius’ harmonies can prove treacherous for even professional orchestras, but COYO sounded nothing less than superb. The rich string sound was mature, and the characterful wind playing was well-balanced. Parmeswaran’s direction and meticulous attention to detail married well with the skills of the orchestra — it was difficult to believe that this was a group of pre-college students.

COYO’s performance was a powerful indicator of the state of youth arts education in Northeast Ohio.

END_OF_DOCUMENT_TOKEN_TO_BE_REPLACED

The strings-only work by Berg has made relatively frequent appearances on the Orchestra’s programs. In 2021, the musicians recorded it for the In Focus series, and it appeared again on last year’s European tour. Friday’s rendition maintained the group’s characteristic light and effortless playing, each section blending as much as possible to echo the work’s original form as a string quartet. At fifteen minutes total, the piece is quite short, but the dense encoded musical meanings require some extra-attentive listening. Splitting up the three movements ensured that each one could be appreciated on its own. END_OF_DOCUMENT_TOKEN_TO_BE_REPLACED