You can argue whether Sean Connery, Roger Moore, Pierce Brosnan, or Daniel Craig made the best James Bond, but one thing is certain: Ian Fleming’s character is super cool. As much as fans of 007 anticipate the release of each new film to see what forces of evil the British Intelligence Officer will thwart, it’s the iconic theme songs that make Bond films special.

On Saturday, November 12 at Severance Hall, the Cleveland Pops Orchestra, under the direction of Carl Topilow, kicked off their 20th-anniversary season in style with a program titled “The Name is Bond…James Bond!” The evening featured the multi-talented singer, actor, and comedian Rachel York. 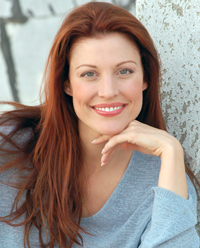 In true Cleveland Pops fashion, attention to detail was impressive. Bond memorabilia was on display in the Smith Lobby, an Aston Martin was parked outside the hall, and since the “Bond Girls” were not available to greet the audience, who better to fill that role than the Cavaliers Cheerleaders? Combined with a tribute to the Cavs championship — a performance of “O Fortuna” with cheerleaders onstage — and a total of thirteen Bond theme songs, it was hard not to get caught up in the festivities. Oh yes: given it was the first concert of the Pops’ season, Topilow took the opportunity to show off the twentieth edition of the jackets tailored especially for him by Joseph Scafidi.

Performing for a sold-out audience, Topilow and his top-notch players began the concert with Monty Norman’s James Bond Theme, which has been a constant in Bond films since the 1962.

Given that each Bond song is so closely associated with the artist who made it famous, Rachel York had her work cut out for her, but her vocal prowess came through, allowing her to make Goldfinger, Moonraker, A View to a Kill, You Only Live Twice, Die Another Day, and Skyfall her own. But it was Marvin Hamlisch’s Nobody Does it Better from The Spy Who Loved Me that was the standout.

The evening also included some non-Bond songs featuring York. Her rendition of Sooner or Later from Dick Tracy was splendid.

Topilow and the Orchestra had their own moments in the sun, including From Russia with Love, the Theme from Mission Impossible, and The Pink Panther. The orchestral standout was the Theme from Peter Gunn, which featured outstanding solos by trumpeter Jack Schantz, trombonist Paul Ferguson, and Topilow — this time on a black clarinet.

The audience wanted more, and Rachel York returned for a wild performance of Diamonds are Forever, during which she imitated many of the great stage divas, from Eartha Kitt to Julie Andrews. A fun way to end the evening.

END_OF_DOCUMENT_TOKEN_TO_BE_REPLACED

Supported by engagingly, yet simple staging by Cara Consilvio, a well-prepared cast of singers told the archetypal story of Cinderella with charm and flair. Framing the production was  a sparse but colorful set and wonderful lighting by Dave Brooks. END_OF_DOCUMENT_TOKEN_TO_BE_REPLACED