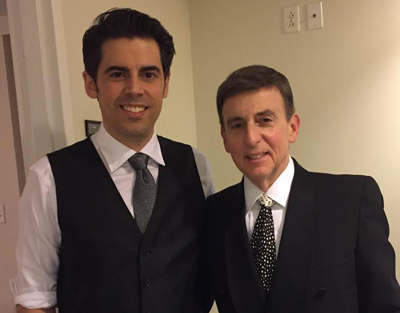 On the off-chance that somebody didn’t “love” the piano before attending the Cleveland Pops concert on March 25 at Severance Hall, pianist, singer-songwriter, and arranger Tony DeSare provided more than enough reasons to have a change of heart during his new show, aptly titled I Love a Piano.

DeSare was in his element from beginning to end as he paid tribute to the great classical, jazz, pop, and rock pianists of history. Throughout the evening, Carl Topilow and the excellent Cleveland Pops Orchestra also had plenty of moments to strut their stuff.

While the program is cleverly designed, it never came off as being overly calculated — he introduced each piece with brief, insightful comments, and then got down to business letting the music speak for itself. Yet this was not an evening of “tribute band” arrangements, as DeSare brought his own artistic take to each song.

“Evolution of Piano Pops” took the capacity audience on a whirlwind tour of some of the great piano works throughout history, from Bach to Chopsticks and on to Autumn Leaves, The Entertainer, Heart and Soul, Music Box Dancer, I Feel the Earth Move, and Great Balls of Fire, to name a few. DeSare and the Orchestra opened the program with what else, Irving Berlin’s classic I Love a Piano.

DeSare paid tribute to Elton John beginning with a solo medley that included Your Song, Rocket Man, Candle in the Wind, and I’m Still Standing, before Topilow and the Orchestra joined him for a rousing rendition of Philadelphia Freedom.

The music of Ray Charles was represented with What I’d Say, which featured solos by Topilow on clarinet, Dave Banks on trumpet, and John Klayman on tenor sax. And DeSare brought his vocal prowess to Hallelujah I Love Her So, which included an outstanding alto sax solo by Howie Smith.

DeSare tucked in a couple of his own compositions: the beautiful How Will I Say I Love Her So and New Orleans Tango, where he showed off his piano chops.

The evening was brought full circle with George Gershwin’s Rhapsody in Blue. Here DeSare proved that as a pianist, he is the real deal. Performing with technical agility and nuanced lyricism, he brought a freshness to the concerto. Not too classical and not too jazzy, it was just right. Carl Topilow and the Orchestra were brilliant collaborators.

An encore? Of course, and Billy Joel’s Piano Man was the obvious, and perfect, choice.

END_OF_DOCUMENT_TOKEN_TO_BE_REPLACED

The strings-only work by Berg has made relatively frequent appearances on the Orchestra’s programs. In 2021, the musicians recorded it for the In Focus series, and it appeared again on last year’s European tour. Friday’s rendition maintained the group’s characteristic light and effortless playing, each section blending as much as possible to echo the work’s original form as a string quartet. At fifteen minutes total, the piece is quite short, but the dense encoded musical meanings require some extra-attentive listening. Splitting up the three movements ensured that each one could be appreciated on its own. END_OF_DOCUMENT_TOKEN_TO_BE_REPLACED