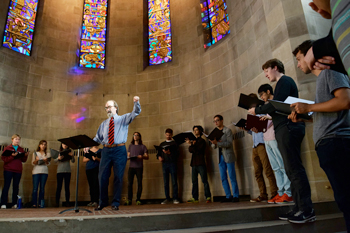 Choosing works that complement one another is not always an easy task. That is, unless a theme emerges. For this weekend’s concerts, Collegium Musicum Oberliniese director Steven Plank has chosen a program that juxtaposes the music of two composers who are usually cast as polar opposites —  Giovanni da Palestrina and Claudio Monteverdi.

In his program notes, Plank suggests that while Palestrina was the musical icon of Counter-Reformation Rome, on the other hand, Claudio Monteverdi claims an equally iconic status as the master of seventeenth-century musical modernism.

In an interview Plank noted that placing the counterpoint of the two composers side-by-side makes for an interesting pairing. “You’ve got the orthodox foundational repertory, and then you’ve got that which is revolutionary pushing against that. And yet what is interesting to me is that they go together very well. They don’t feel antagonistic.”

That tug of old versus new runs throughout the entire program with its time span of hundreds of years, from Mouton in the sixteenth century to Eric Whitacre in the twenty-first. This is no random mixture of pieces — each is united by religious and/or Christmas themes.

The largest piece on the program is the Palestrina Mass which showcases the composer’s brilliant depth of style and musical ingenuity, despite being based on only six notes. The second sopranos unite the movements by singing this spare theme, but even then each repetition feels fresh with variations in textures and harmonies. While this may seem like a purely academic piece, Plank said that “the counterpoint is rich, certainly, and intellectually quite solid, but the sound that emerges from it is very gratifying.” In other words, this is a treat for the mind and the ears alike.

When asked how he chose the Whitacre, Plank said it was because of its seasonally appropriate text about golden light falling on the newborn baby Jesus. “Culturally, it has become such a hit piece that from a pedagogical standpoint people ought to have the chance to experience it.”

It also acts as a palate-cleanser after Palestrina’s subtle variations: Whitacre’s famously modern-sounding cluster chords are radically different from the work of the man who is credited with inventing the rules of counterpoint. They’re not so different as to be jarring, however — Plank said that both draw on “the cathedral ambiance.” 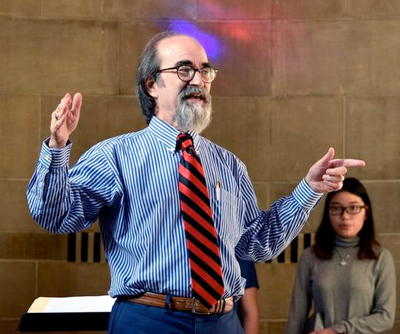 Plank chose Gabrieli’s Cantate dominum as the finale both for its rousing dancelike figures and its incorporation of both the old Palestrina style and the pioneering new style. This new style changed the hierarchy of words and music, allowing composers to break rules to convey the text. Here, Gabrieli uses two separate and alternating choirs to play with echoes and space, a style known as concertato. He drew inspiration from his hometown of Venice, which Plank said “had a strong allegiance to the old-fashioned” that tempered Gabrieli’s innovative desires.

Plank’s goal for Collegium is to find music that allows his singers to have the experience of performing in chamber style with just a few singers on a part. “That’s a challenge, but it’s also gratifying because you can do really thickly-scored pieces like the Mouton. It requires some depths in the ranks, but we’ve got that this year.”

Another consideration is making sure the religious pieces fit as well on the concert stage as they do in their original liturgical context. This multiple framing is especially interesting in Monteverdi’s Felle Amari, which was originally conceived as the secular madrigal Crud’amarilli. “This was the piece that originally prompted the discussion of the difference between the first and second practices of Palestrina vs. Monteverdi,” Plank said. “He reframed his own piece into a sacred context by changing the text from one of unrequited love to Jesus’s lament for the unfeeling people for whom he dies. The undertones of sadness, longing, and death remain the same.”

Abigail Hakel-Garcia is a fourth-year violin major at the Oberlin Conservatory of Music who hails from Erie, Pennsylvania. She has sung in Collegium for the last seven semesters and wrote this preview for Oberlin’s Introduction to Music Journalism course.

END_OF_DOCUMENT_TOKEN_TO_BE_REPLACED

Although it wasn’t the original plan to go online last weekend for the final round of the James Stroud Classical Guitar Competition, moving to a digital format suited the event well. Young performers Aytahn Benavi, Patricia Hernandez, Ian Tubbs, and Eric Wang played in the intimate setting of their own homes, giving everyone who tuned in a front row seat. END_OF_DOCUMENT_TOKEN_TO_BE_REPLACED

END_OF_DOCUMENT_TOKEN_TO_BE_REPLACED

Joining a long list of arrangers, Parker Ramsay has now transcribed the Variations for the modern pedal harp, an instrument for which he holds a master’s degree from Juilliard, in addition to a degree in history from Cambridge University, plus a master’s in historical performance (organ and harpsichord) and an artist diploma (organ) from Oberlin. END_OF_DOCUMENT_TOKEN_TO_BE_REPLACED