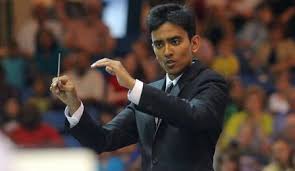 “When I was in middle and high school I played percussion in the San Francisco Symphony Youth Orchestra, and those six years were incredibly formative for me,” conductor Vinay Parameswaran said during a telephone interview. “It confirmed my love for classical music, and told me that I wanted to be around it in some capacity. It’s been nice coming back to those years in youth orchestra that meant so much to me.”

On Friday, December 1 at 8:00 pm at Severance Hall, Parameswaran will make his debut as music director and conductor of the Cleveland Orchestra Youth Orchestra. Tickets are available online.

Parameswaran, who also serves as assistant conductor of The Cleveland Orchestra, said that he’s “had a blast” working with the young COYO musicians. “There’s so much talent in that group. The energy and enthusiasm they bring to this music is unparalleled. They’ve really grasped this repertoire, and I can’t wait to see them in action on Friday.”

The conductor said that Samuel Barber is one of his favorite composers and that he has been obsessed with his Symphony No. 1 from the first time he heard it. “I find it incredibly fascinating. He was only 25 or 26 when he wrote it but I think it’s such a masterwork — it’s a 50-minute symphony condensed into 19 minutes. Barber’s transitions and the way that he develops the thematic material are just brilliant. What I love about him is that he knows how to write for the voice, and in his music you get some of the most beautiful melodies you’ll find.”

Parameswaran noted that Barber’s symphony was given its U.S. premiere by The Cleveland Orchestra under the direction of Artur Rodzinski in 1937. “It was also the first American symphonic work to be performed at the Salzburg Festival. This piece has a rich history, but for some reason it’s been overlooked, perhaps because of the length — you can’t put it on a second half by itself. I thought it would be perfect for this COYO concert because they have never played it and it’s a piece that showcases every section of the orchestra. Each has a moment to shine.”

When it came to selections from Prokofiev’s Romeo and Juliet, Parameswaran said that because he does not find the existing suites to be satisfying by themselves, he decided to construct his own. “I wanted more of the arc of the story, so I’m cherry-picking from all three. We’ll start with ‘Montagues and Capulets,’ we’ll also play ‘Morning Dance,’ ‘Young Juliet,’ the ‘Minuet,’ ‘Masks,’ ‘Love Scene,’ and ‘Death of Tybalt’, and finish with ‘Death of Juliet.’ This is some of Prokofiev’s most amazing music, but I don’t think that ending with ‘Death of Tybalt’ works in terms of the story line. Ending with ‘Death of Juliet’ brings it closer.”

Friday’s program will open with Beethoven’s Leonore Overture No. 3. “I’ll program Beethoven any day of the week,’’ Parameswaran said, “but the thinking behind this was the 100th anniversary of the Orchestra, and the Prometheus Project and Beethoven cycle at the end of the season. We wanted the Youth Orchestra to be a part of that celebration, and I can’t think of a better opener than this.”

When it comes to working with young musicians, Parameswaran said that he strives to create an environment where they become the best musicians that they can. “I’ve also learned from them, and by giving them space, they bring out so many things that I may not have thought about or maybe didn’t hear. It might be small things like the way the concertmaster suggests a bowing, or the way the oboist phrases the solo in the Barber. These pieces are all familiar to me, but still it’s amazing how a group like COYO can bring new ideas and a freshness to the way that I think about these pieces. This is only our first concert together and I can’t wait to see how we grow from here.”

What led Parameswaran to want to move from the back to the front of the orchestra? “As a percussionist you spend most of your time not playing,” he said with a chuckle. “It’s spent resting and counting measures. But what that afforded me was the opportunity to listen to what was going on around me. I just loved watching conductors work. I loved watching them shape all these beautiful colors. I also liked how conductors advocated for the arts. They were present in schools and were fighting for the arts in the community. I found all of that to be inspirational.”

It was while he was pursuing his undergraduate degree at Brown that Parameswaran began to study conducting seriously. “I went to the Paul Phillips, the director of orchestras, and told him that I had a minor interest in conducting — just a curiosity — and he took me on as a private student. We were starting from scratch. I hadn’t looked at a score before, I didn’t know how to read alto clef or how to transpose clarinet in A. So we started with the basics.”

The first piece they studied was Brahms’ First Symphony, and he recalled being amazed at how the score was put together. “Phillips also gave me podium time, which most undergrads don’t get. Whenever he needed to be out of town he would let me do a rehearsal or a sectional. I loved being on the podium from the very first experience. Of course I littered the floor with mistakes but at least I was in front of my friends so they gave me a pass. I loved studying scores and delving into these great works.”

After graduating from Brown with a bachelor of arts degree in music and political science, Parameswaran went on to study with Otto-Werner Mueller at the Curtis Institute of Music. “I’ve had teachers who have really supported me and gave me the right tools to fall in love with being a conductor.”

Another mentor, Giancarlo Guerrero, Parameswaran’s former boss in Nashville, put the role of the conductor in perspective. “He was also a percussionist, and he would always say, ‘I used to be in the back with two sticks and now I’m in the front — but they only let me carry one stick now.’”