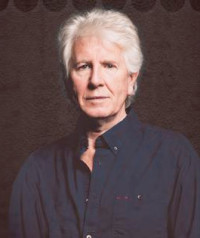 “Kids are 25% of the population and 100% of our future,” the legendary Graham Nash said during a recent telephone conversation. “I think it’s one of those truths so simple to understand that it strikes the heart immediately.” On Friday, June 5 at 8:00 pm in Severance Hall, Liza Grossman will lead the 115-member Contemporary Youth Orchestra and 70-member chorus in GNASH, the first-ever concert devoted solely to Nash’s music with orchestra.

“A few years ago I did sing with CYO, but it was not an entire concert of my music,” Nash recalled. “I must tell you that I’m looking forward to the show.” It was Nash himself who came up with the concert’s unusual title, GNASH. “It always intrigued me that my first initial and my last name spells the word gnash, as in gnashing your teeth.”

The title also served as inspiration when it came to choosing which of Nash’s songs to perform. “I though it obvious that they would want to play songs like Our House and maybe Marrakesh Express. I also thought I should introduce a few songs that address topics of what is going on in the world today — which is one of the reasons why people seem to love Crosby Stills and Nash, and that’s why we swayed the program toward pointed music like Military Madness and Chicago.”

Since performing their first concert as a trio during the 1969 Woodstock festival, CSN (David Crosby, Stephen Stills, and Graham Nash) have dedicated themselves to writing and performing music with a social message. Friday’s concert will include a new song that speaks to the events in Ferguson, Missouri. “When we heard the news about Michael Brown, I dug out some ideas for songs that seemed to really speak to the issue. Shane Fontayne, one of our guitar players in the CSN band and I wrote Watch Out for the Wind, and we played it that night. David and Stephen had not heard the song, but they trusted me enough to let me do it. It’s a simple rock & roll song, but it does get the point across.”

Another song that will be included on the program is Burning for the Buddha. “When our pianist, James Raymond and I heard about the 128 Tibetan monks that had burned themselves to death in protest of the treatment of the Tibetan people by the Chinese government, we wrote this song along with our friend Marcus Eaton.”

Why did writing music that addresses social issues become such an important part of Graham Nash’s personal fabric? “I think it stems back from my own upbringing at the end of World War II. Quite frankly, in those days you were lucky if your friends were alive and your houses were still standing every day — many people’s houses were blown up. I’m from Manchester, which is on the Manchester Ship Canal near Liverpool, one of the main goods and services canals into the north of England, which the Germans wanted to interrupt. Manchester was heavily bombed and I think the gratitude that I have for being alive, and my attitude of ‘if we’re going to do this job let’s get on with it and do it the best way that we can,’ still stands to this day.”

What keeps him on the road and performing for audiences around the globe? “A love for what I do,” he responds without missing a beat. “I like to communicate. I like to talk to people. Of course I have my boundaries — everybody does — but generally I am a communicator. I want to speak my mind, and that’s why I’m so proud to have been American citizen for all these decades. I wanted to be a part of this country. I didn’t want to be someone just standing on the sidelines throwing bad comments about what going on in the country. I’m a very positive person, and I look at the world through the eyes of my own children. And I want to make it a better place for them and my grandchildren.”

The concert will mark the culmination of CYO’s twentieth anniversary season. “This is the concert I feel like I’ve been waiting to do,” said orchestra founder and artistic director Liza Grossman. “It’s incredibly humbling to have this opportunity, and the CYO members are learning so much. This is a different kind of education for them — about history and how the arts can speak to social issues.”

The concert will be recorded by Five Four Productions and will be filmed for a future documentary on PBS.