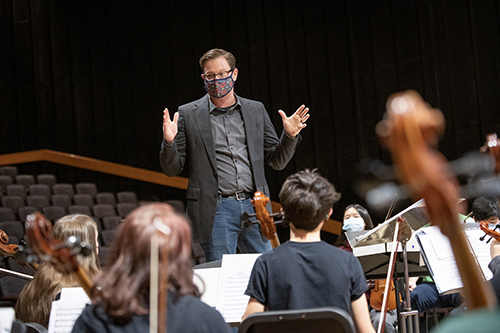 Since 1995 the Contemporary Youth Orchestra has been engaging young musicians — and the public — through the study and performance of contemporary classical music.

Throughout its history CYO has adopted an expansive definition of contemporary music through collaborations with turntable artists, video game composers, and singer-songwriters, and through the annual Rock The Orchestra concert, each of which provides the membership with a lens into different aspects of the music industry.

Originally calling Cleveland State University home, in March of 2018 the organization relocated to the Tri-C Metro Campus. With the departure in 2020 of its founder Liza Grossman and the hiring this past fall of Kristopher Morron as the Orchestra’s new music director and conductor, the Contemporary Youth Orchestra, now in its 27th year, is entering a new era.

On January 29, CYO will hold an Open House from 8:30 am until 12:30 pm at the Tri-C Metro Campus Auditorium. For more information, email Ben Kipp.

Kipp, who is in his eighth year as CYO’s director of educational programming, said that the organization is proud of all the things that have been accomplished — especially their partnership with Cuyahoga Community College. “Tri-C is a big part of how we see the Orchestra merging into the greater music education community,” he said. “Along with Kim Deichler, our executive director, we’ve been strategizing and studying other successful groups in music and the arts. But I can’t stress enough how important the partnership with Tri-C is.” 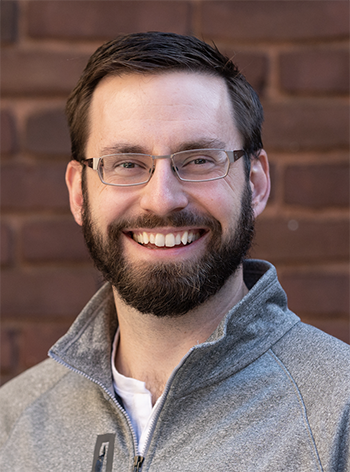 What is CYO’s relationship with Tri-C? “I think it’s still kind of unknown,” Kipp said.“But when we moved to Tri-C we all got the feeling that this was the next step for us.” He added that the residency also provides them with the opportunity to share resources, teachers, and time, as well as the ability to collaborate on projects.

“Contemporary classical music is hard to define and I think the topic of education falls on top of that. The requirements of what students need changes so much, so we don’t really know what the next five, ten years will look like,” Kipp said. “We certainly have lots of goals and practical next steps for things that we wouldn’t be able to do without Tri-C. But everyone is willing to say, let’s try things, let’s experiment, and let’s figure out ways to make access to the arts and music more equitable. Paul Cox, (Dean of the Creative Arts Center of Excellence) is incredible, as is Emanuela Friscioni, (Director of the Creative Arts Academy), but everyone we’ve interacted with has been so welcoming.”

When asked if all of the CYO members are also part of Tri-C’s educational programs, Kipp said, “The best way to think about it is that there’s the Creative Arts Academy, which is the organization that runs music, dance, visual arts, recording arts, etc, and CYO is a spoke in that wheel. To be a member of CYO you still have to audition, but now our students have easier access to take a college class while still in high school.”

As for the search process for the new music director/conductor, Kipp noted that there were over twenty applicants from across the U.S. along with a couple of  international candidates. After a lengthy interview process with the Board and Staff, three were invited to rehearse with CYO. “Kris’s resume doesn’t look like an orchestra conductor’s resume, but being at the auditions, I can tell you that he was the standout. It wasn’t that he is just a master educator, it was that he could see himself in the students. And reading their comments was amazing. One of them wrote: ‘He is the chosen one.’” 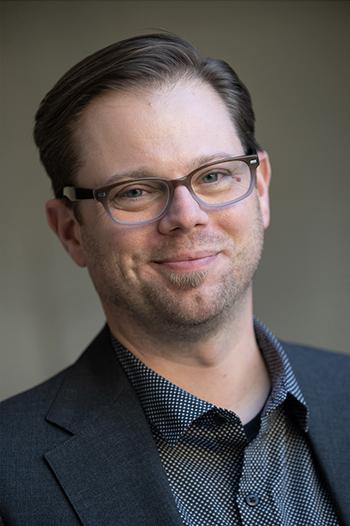 The conductor noted that all of CYO’s endeavors are in line with his own interests. “My background is pretty diverse when it comes to making music, and my philosophy has always been, there’s so much music to explore, why limit myself to one thing. So to have the opportunity to help shape the direction of CYO is exciting.” He added that his experience as an educator has shown him that while students love music, deciding what to do with it is often a problem. “The fact is that there are so many things you can do in the entertainment industry besides being an educator or performer. And that’s what CYO projects demonstrate so well.”

What was Kristopher Morron’s path to becoming a conductor? He said that like many people, he’s been interested in music since he was a kid. “Neither of my parents were particularly musical, but my father played trombone in high school.”

When it came time to select an instrument in elementary school, Morron initially had his mind set on the saxophone. But his band director had other plans. “In his infinite wisdom, he said why don’t you try the trombone. I thought — my dad played the trombone so I would too. It ended up being a good match.” 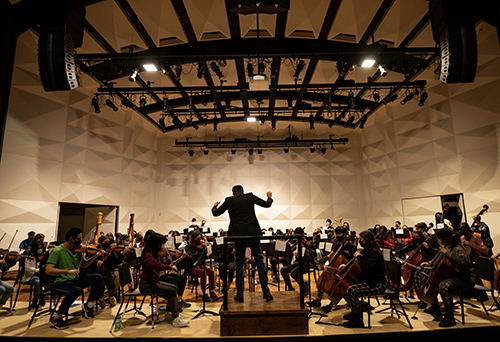 It was in middle school that he was first introduced to jazz. “I had a fantastic band director, Jeff Fudale, and he encouraged me to study it.” Morron added that one thing led to another and eventually he met saxophonist Ernie Krivda. “We went to hear him play and I thought that jazz was pretty cool so I started studying it and fortunately, Ernie was kind enough to invite me to be part of the jazz ensemble at Tri-C during my junior and senior year. That gave me the opportunity to perform with guest artists at JazzFest. I got to play with Steve Turre, Benny Golson, and Curtis Fuller — no high school student should have had as many opportunities as I did, but that was thanks to Tri-C.”

When it came time for college, Morron enrolled at Bowling Green with the intent of becoming a jazz performer. “My parents were concerned about me making a living, so they encouraged me to get an education degree. Which I wasn’t against, because I did see education as being a part of my music making. So I studied both jazz and music education.”

While at Bowling Green Morron was also playing with bands in Cleveland, which he said provided him with two schools of music making. “You had actual school, and then I’d play at Spy Bar on Thursday night. I’d drive back early Friday morning and show up in my Zoot Suit for my first period music theory class. But it was great because I was learning music theory and experiencing all the great things you do in college. But I was also out performing and understanding what it’s like to deal with sound checks and getting to the gig early and not finishing until 3:00 in the morning.”

Following graduation Morron came back to Cleveland and took a job at Educators Music in addition to playing with area bands. “Then a job opportunity came up in the Parma City Schools,” he recalled. “It was part-time at the beginning and later I was  offered a full-time position. I was there from 2004 up to this past year.”

Still, the other side of Morron needed creative outlets, so he continued to play with bands such as Mifuné, Revolution Brass Band, and Trepanning Trio. “Those were opportunities to make music that interested me. I really like Afro Beat and I enjoy playing the guzheng, a 21-string zither. And at some point, every jazz musician has to be a part of a New Orleans-style brass band.”

“What’s exciting about this program is that we’re playing orchestral music that’s from another part of the world that maybe our students aren’t as familiar with,” Morron said. “There’s also a large number of kids in the ensemble who really like anime and the Studio Ghibli films, so we feel that this is not only a cultural exploration, but something that meets their interests.” 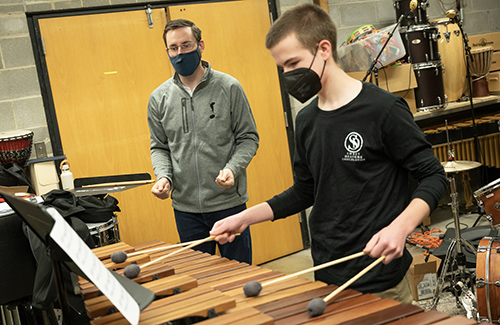 Ben Kipp (pictured coaching Christopher Gerace) pointed out that chamber music is also part of CYO’s programs. “We have two string quartets, a string ensemble, a wind ensemble, and a percussion ensemble,” he said, adding that last season they spoke to educators and asked them what they were missing in their programs because of class time constraints. “Far and away they all said chamber music. That was something we had been doing, but we’ve taken the time to retool what we do and how we spend time doing it.”

Supported by engagingly, yet simple staging by Cara Consilvio, a well-prepared cast of singers told the archetypal story of Cinderella with charm and flair. Framing the production was  a sparse but colorful set and wonderful lighting by Dave Brooks. END_OF_DOCUMENT_TOKEN_TO_BE_REPLACED

END_OF_DOCUMENT_TOKEN_TO_BE_REPLACED

The music isn’t easy to play, either. Over the course of two hours, all of the musicians brought fantastic focus to the unrelenting tricky rhythms and countless layers of parts, all of which require a high level of individual responsibility. Even in the moments of calm, the accompaniment remains perpetually unsettled. Adams — who made a sprightly presence on the podium — combines minimalist, repeating motives in gradual layers, which eventually become so dense they overwhelm the senses. Lisa Wong deserves special mention for her thorough preparation of the Cleveland Orchestra Chorus, as does Jennifer Rozsa for the Children’s Chorus, which made a brief but memorable appearance in the last few minutes. END_OF_DOCUMENT_TOKEN_TO_BE_REPLACED