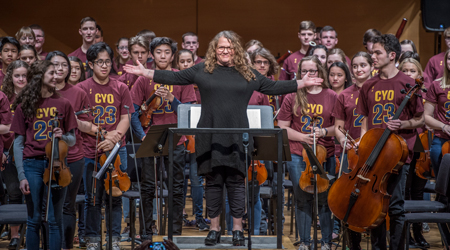 For the past 22 years, conductor Liza Grossman has been turning young musicians on to the expansive repertoire that falls under the category of new music. On Saturday, December 9 in CSU’s Waetjen Auditorium, Grossman led her Contemporary Youth Orchestra in the opening concert of the impressive ensemble’s 23rd season. The program, titled “Go! Music to Get You Moving,” took listeners on a stroll from the English countryside to the birthplace of techno music in the empty warehouses of downtown Detroit.

The 100-plus member ensemble was decked out in wine, navy blue, and gold t-shirts with the number 23 printed on the front. As they finished tuning, Grossman joked, “Season 23. I wonder what t-shirts we should wear this year?” The reference to Cleveland Cavaliers star LeBron James solicited a laugh from the large audience.

The evening began with Clint Needham’s dynamic, groove-based Free Radicals. Although the eight-minute work presents plenty of rhythmic challenges — the music weaves in, out, and around a constant 5/4 beat — Grossman drew a confident if at times overpowering reading from the orchestra, as well as hearty applause from the composer. It’s always a pleasure to hear Needham’s well-crafted, inventive music and this work was a perfect concert opener. 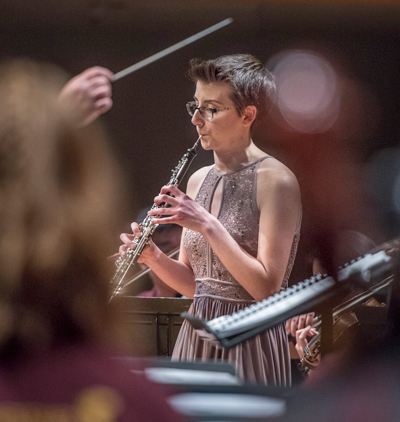 As is customary during the first concert of a new CYO season, the evening featured a performance by the Orchestra’s concerto competition winner. On Saturday that honor was bestowed on Kate Young, who sounded splendid during the opening movement of Ralph Vaughan Williams’ Oboe Concerto. Playing with a rich, focused sound, the Strongsville High School senior brought elegance to the concerto’s long pastoral lines evoking an expansive English landscape. The sprightly dance section was appropriately impish. This concerto is a big undertaking for any oboist and Young was up to the task. She was rewarded with a well-deserved ovation as well as numerous bouquets of flowers. In a touching gesture, each orchestra member saluted the soloist by holding up a single flower. 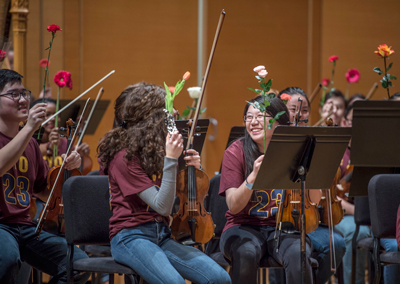 The music moved from England to Mexico with Grossman leading a rollicking interpretation of Arturo Márquez’s Danzón No. 2 that made you want to get up and dance.

The final two works featured CYO alums. Sarah Frisof holds the distinction of being the Orchestra’s charter principal flute as well as its second concerto competition winner. Since that time, she has earned degrees from Eastman, Juilliard, and the University of Michigan and now serves as Associate Professor of Flute at the University of Maryland. 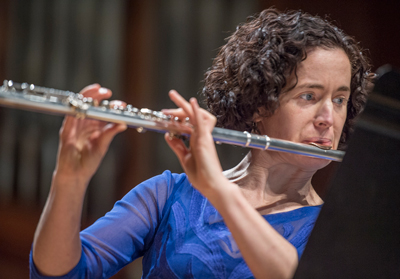 Frisof’s challenge was Joan Tower’s Flute Concerto. From the opening quasi-cadenza to the concluding relentless virtuosic passages, Frisof’s playing was commanding, captivating, and technically brilliant as she brought a full color palette to Tower’s stunning music. Grossman kept everything neat and tidy, never allowing the chamber ensemble to overpower the soloist. Kudos to flutist Erin Mast, whose duets with Frisof were hauntingly beautiful.

After spending four years as a CYO violinist, Jacob Duber is now studying experimental electronic and electroacoustic music at the University of Cincinnati College-Conservatory of Music. On Saturday, he joined his former orchestra, this time with his laptop, providing the electronics for Mason Bates’s imaginative five-movement work, The B-Sides.

In his program notes the composer writes:

Like the forgotten bands from the flipside of an old piece of vinyl, The B-Sides offers brief landings on a variety of peculiar planets, unified by a focus on fluorescent orchestral sonorities and morphing rhythms of electronica. 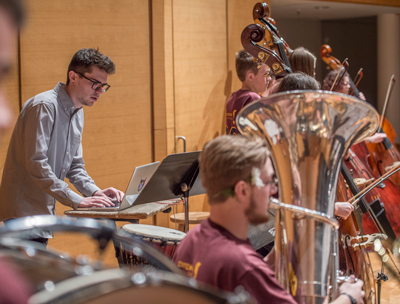 Bates inventively blends electronics with acoustic instruments to create a clock-like motif during “Broom of the System,” where a real broom sweeps a piece of sandpaper mounted on the stage wall, keeping the clock running. The gentle, melodic, and totally acoustic “Aerosol Melody (Hanalei)” is followed by “Gemini in the Solar Wind,” a re-imagining of the first moon landing featuring samples provided by NASA of the 1965 voyage. That proceeds directly into the charming and electronics-free “Temescal Noir.” The broom returns, sweeping the music into the electronic, hard-driving beats of “Warehouse Medicine.”

Liza Grossman led an inspired performance of the work. Her close attention to rhythmic detail, interweaving melodic lines, and balances during the concluding brass swells resulted in a riveting performance. An impressive beginning to the 23rd season.

A refreshing reminder of both the unique powers and deeper kinships of music and poetry, the performance of Collage on October 14 filled the Auditorium of Pilgrim Church with sounds both tranquil and mighty. In an era when rhyming rhythmic recitation over instrumental sound hardly constitutes a new idea — hip-hop, after all, is the ascendant popular genre of the present century — Okantah and the Cavani have engineered something unique, brilliant, and vital. END_OF_DOCUMENT_TOKEN_TO_BE_REPLACED

Although the Museum had just opened again earlier in the week, in-person concerts were not on the agenda. Instead, Classical Piano Series director Emanuela Friscioni and her husband Antonio Pompa-Baldi invited a virtual audience into their handsome, sun-dappled music room for an intimate, exquisitely-played program of four-hand piano works by Schubert and Debussy topped off with the premiere of a new work by their fellow Italian, Luca Moscardi. END_OF_DOCUMENT_TOKEN_TO_BE_REPLACED

END_OF_DOCUMENT_TOKEN_TO_BE_REPLACED

Northeast Ohio’s Les Délices has long been that rarest of beasts: a world-class organization so proud of its region (ours) and repertoire (distinct niches in pre-1800 music) that it never tries to be everything to everyone, paradoxically making a strong case for a broad, curious international following. In the December episode of its SalonEra series, the ensemble embraces its strengths and community to marvelous effect. END_OF_DOCUMENT_TOKEN_TO_BE_REPLACED