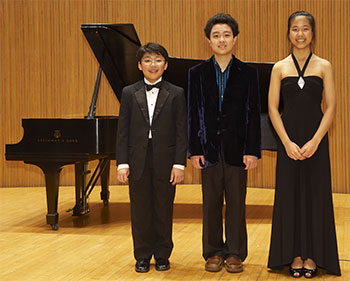 The three winners of the 2010 Cooper International Piano Competition are:

The awards, announced by donor Thomas Cooper after the young pianists played concerti by Chopin, Tchaikovsky and Prokofiev with Jahja Ling and The Cleveland Orchestra in Severance Hall on Friday evening, include four-year, full tuition scholarships to The Oberlin Conservatory and cash prizes of $10,000, $6,000 and $3,000, respectively. Mr. Li will also play concerts with orchestras in Shanghai and Beijing.

ClevelandClassical.com’s reports on the semifinalists’ concert in Reinberger Chamber Hall on Friday afternoon and the finals on Friday evening will be posted later this weekend.

With this work, premiered in 1907, Sibelius offered a bold departure from the explosive emotionalism so prevalent in late-Romantic era music. This symphony was a renewed embrace of Classicism’s purity of form and melody, and one that, oddly enough, left many initial audiences of the day somewhat bewildered. END_OF_DOCUMENT_TOKEN_TO_BE_REPLACED

After eating a Po’boy from The Dawg Bowl Cajun food truck, I caught the first half of Brian Culbertson’s show in The Connor Palace Theatre. END_OF_DOCUMENT_TOKEN_TO_BE_REPLACED