Another issue that needed to be taken into consideration is that people’s attention spans are different online. “We’re thinking in smaller segments,” Slowik said. “There won’t be any hour-and-a-half to two-hour master classes — they may only be an hour. There will also be a lot of fifteen-minute segments where we’ll focus on some technical or musical aspects.”

Like many classical music organizations, Credo was planning to focus this summer’s activities on Beethoven, which included bringing in some of Slowik’s Oberlin colleagues. Music Theory Professor Brian Alegant and Musicology Professor Charles McGuire had planned to present lectures about his music. “They’re still going to be talking about Beethoven’s chamber music, but they’ll talk about it in modular fashion — hypermeter, or first editions of his works, or first performances,” Slowik said. “They’ll also have office hours where students can dig deeper into some of these topics that are just broached in the mini lectures.”

A bright spot with so many festivals being canceled this summer is that Slowik was able to enlist many of the Oberlin Conservatory faculty to teach at Credo. “Most of my colleagues are usually gone in the summer, so instead of Credo being at Oberlin, this year we flipped the script and Oberlin is at Credo.”

The Festival will again feature residencies by prominent string quartets. Prior to moving to the online format, Credo had already engaged the Arianna, Jasper, and Callisto quartets. “Jasper was formed at Oberlin and two of the members of the Callisto — violinist Rachel Stenzel and cellist Hannah Moses — were multi-year Credo students. And all four members did their undergrad work at the Cleveland Institute of Music.”

Slowik noted that a lot of planning discussions centered on why students attend festivals. He said that an important reason is community. “A good music festival challenges students, but it also finds ways of supporting and encouraging them. “When students live in community for several weeks, they find what they should find. But if they are at home, they may not know what to look for, so we’re having lunch tables with faculty members, and students are also introducing themselves on the Credo Facebook page.” 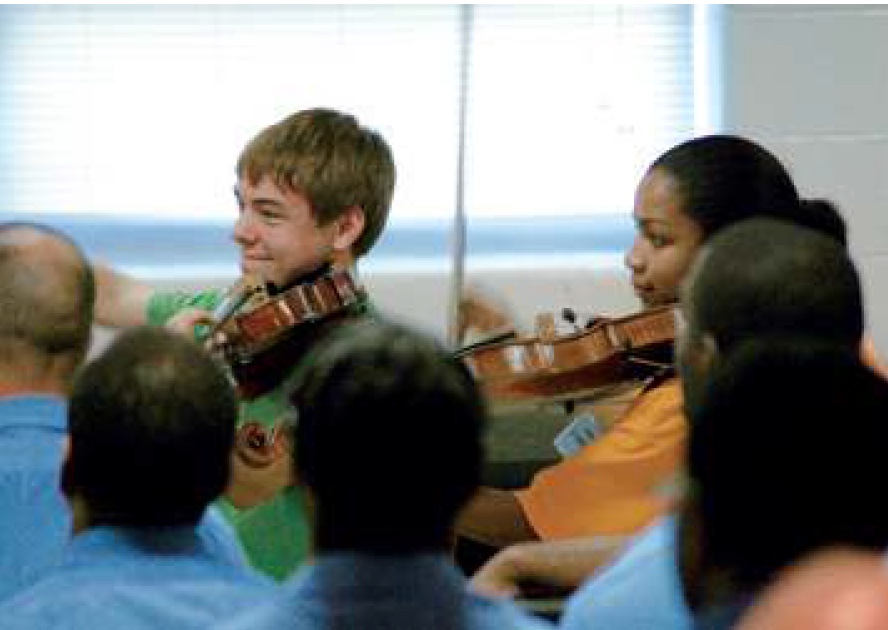 As always, community engagement activities will remain integral to what Credo is about: the idea that musicians can make a difference in the world. During the Festival each student will be required to take on two musical projects and two non-musical projects. “It’s as easy as volunteering at your local food bank, then while people are arriving in their cars, playing a concert for them. But it is harder this year because some of our best target audiences are people in nursing homes and prisons,” Slowik said. The Festival has created a system for people to find a project, and an accountability system so that students can gather to talk about their service.

“We also have two Credo alumni who are music education string faculty at Eastman and Texas Tech, and they have put together a robust menu of possibilities. We usually make it easy for the students — this way they have to want to do it a little bit more. And it does rely on a family’s buy-in.”

Although faculty performances are still being planned, Slowik did say that on July 6,  cellist Dmitri Kousov will present a live-streamed concert, as will violinist David Bowlin and pianist Tony Cho on July 7. Faculty quartet concerts will be held on June 29 (Callisto), July 1 (Arianna), and July 9 (Jasper). All performances begin at 8:30 pm and are available to the public.

“All of this is not as easy as flipping the switch,” Slowik said. “There’s a lot of self-reflection involved and hopefully we all will have learned something about ourselves and different ways to bring music to other people. It’s a neat challenge.”

END_OF_DOCUMENT_TOKEN_TO_BE_REPLACED

Rodgers & Hammerstein’s Cinderella was originally produced for television in 1957 — seven years after the animated Disney film was released — and starred Julie Andrews. According to the Rodgers & Hammerstein website, it was viewed by over 100 million people. END_OF_DOCUMENT_TOKEN_TO_BE_REPLACED

The story line has its origin in an 1855 play and an 1842 farce that Thornton Wilder mined for his 1938 play The Merchant of Yonkers. When that turned out to be a flop, in 1954 Wilder made the crucial decision to re-center the show around the character of the legendary marriage broker Dolly Gallagher Levi and renamed it The Matchmaker. END_OF_DOCUMENT_TOKEN_TO_BE_REPLACED

The Dodero Center for the Performing Arts at the Gilmore Academy in Gates Mills is one feature of an impressive campus. The auditorium is shallow, the stage is deep, and the ensemble played without a shell. Throughout the program, the sound, especially in instruments’ lower registers, tended to disappear. END_OF_DOCUMENT_TOKEN_TO_BE_REPLACED