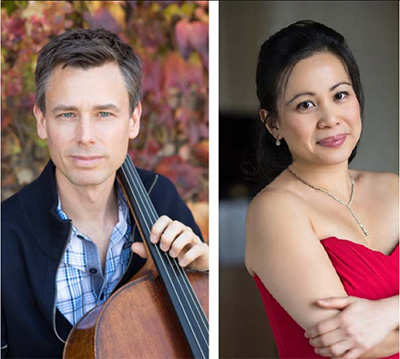 If you had to have musicians living above you, judging from their performance at Pilgrim Church on Sunday, October 13, cellist Darrett Adkins and pianist Cicilia Yudha are two you would want to have. Their concert, which opened Arts Renaissance Tremont’s 29th season, featured intriguing works that proved a cello recital doesn’t always need to include music by the three B’s to hold you in rapt attention.

Leoš Janáček’s only composition for cello and piano, Pohádka (“Fairy Tale”), is based on Vasily Zhukovsky’s epic poem The Tale of Tsar Berendyey. During the three movements, Janáček’s vivid writing portrays scenes from the tale. From the beginning Adkins provided sharp pizzicato phrases over Yudha’s lush, lyrical lines. The duo played passionately in the adagio, and tossed off the catchy melody of the allegro with aplomb, bringing the tale to a merry conclusion.

Adkins possesses a formidable technique, an astonishing mental metronome, and keen musical sensibilities. These attributes served him well in Zoltán Kodály’s Sonata in b for solo cello. It takes intelligence to unpack this 30-minute magnum opus, and from start to finish the cellist skillfully crafted a musical narrative, never allowing it to become episodic.

Adkins was calm and collected in the fiendish, off-the-fingerboard passages of the “Allegro maestoso ma appassionato.” His low register and his left-hand pizzicatos resonated beautifully in the space during the “Adagio (con gran espressione).” And the peasant dance in the “Allegro molto vivace” was as thrilling to watch as it was to hear.

Written while he was a prisoner of war, Messiaen’s Quatuor pour la fin du temps (“Quartet for the End of Time”) was first performed by the composer and his fellow prisoners. Midway through “Louange à l’Éternité de Jésus” (Praise to the eternity of Jesus) the late afternoon sunlight illuminated the sanctuary, as if Mother Nature herself was as much taken by Adkins’ and Yudha’s playing of the slow, meditative piece as the audience.

Hearing Frédéric Chopin’s Sonata in g makes you wish he had written more chamber music. This piece never fails to impress, and here, the cellist and pianist gave it a fresh, vibrant interpretation. The “Allegro moderato” was defined by shapely phrases, while the “Scherzo” was nimbly athletic. The lyrical “Largo” had a vocal quality that exuded love, and the conclusion of the “Allegro” brought the audience to their feet. That’s common at many concerts, but on this occasion, the ovation was truly deserved.

END_OF_DOCUMENT_TOKEN_TO_BE_REPLACED

The strings-only work by Berg has made relatively frequent appearances on the Orchestra’s programs. In 2021, the musicians recorded it for the In Focus series, and it appeared again on last year’s European tour. Friday’s rendition maintained the group’s characteristic light and effortless playing, each section blending as much as possible to echo the work’s original form as a string quartet. At fifteen minutes total, the piece is quite short, but the dense encoded musical meanings require some extra-attentive listening. Splitting up the three movements ensured that each one could be appreciated on its own. END_OF_DOCUMENT_TOKEN_TO_BE_REPLACED