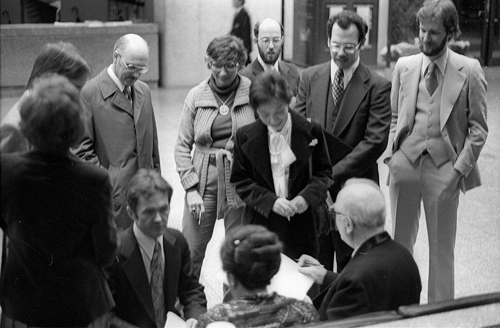 The Cleveland Museum of Art is home to the longest-running concert series of any museum of North America, presenting more than 5,000 concerts over the course of its first century.

In launching the Recorded Archive Editions, CMA will make available historically significant recordings of performances that were exceptional and unique to Cleveland.

The first is composer Lou Harrison’s Concerto for Piano with Javanese Gamelan, featuring pianist Sarah Cahill with Gamelan Galak Tika under the direction of Evan Ziporyn and Jody Diamond. This 2017 performance was organized on the occasion of the composer’s centennial.

The second release is a concert by Olivier Messiaen with his wife, virtuoso pianist Yvonne Loriod. In 1978, they performed Visions de l’Amen, the composer’s masterwork for two pianos. (Pictured: Messiaen and Loriod with a few people you may recognize in the Cleveland Museum lobby in 1978).

These and future Recorded Archive Editions will be available through all the major streaming platforms, including Spotify, Apple Music, and Amazon. Program notes for scholars and enthusiasts will be posted on the museum’s website. Click here for more information.

Today, January 6, traditionally marks the twelfth and final day of Christmas in many Christian cultures. Also known as Epiphany, the day celebrates the visit of “The Three Kings” to Bethlehem. Or were they astrologers? (they followed a star).

While The New Testament does not give them names, the online version of Encyclopædia Britannica states: “According to Western church tradition, Balthasar is often represented as a king of Arabia or sometimes Ethiopia, Melchior as a king of Persia, and Gaspar as a king of India.”

In fact, the Three Wise Men’s visit to the baby Jesus comprises only twelve verses in the Gospel of Matthew. Still, over time, this short narrative has evolved into the Epiphany story that we know today.

The Twelfth Day of Christmas has also been fodder for a number of composers. Click here for BBC 3’s “In Tune Mixtape” of classical music inspired by Epiphany. The playlist includes Ottorino Respighi’s La Befana (Epiphany) from Feste Romane, Duke Ellington’s Three Black Kings, No. 1, “King of the Magi,” and Hans Zimmer’s “What’s an Epiphany,” from The Simpsons Movie.

Click here for J.S. Bach’s Epiphany Cantatas, BWV 65, 81, 111, and 124 performed by the Münchener Bach Choir & Orchestra under the direction of Karl Richter.

And George Bizet’s L’Arlésienne Suite No. 2 incorporates a popular Provençal song, The March of the Kings, into the Farandole that concludes his two suites of incidental music to the play by Alphonse Daudet.