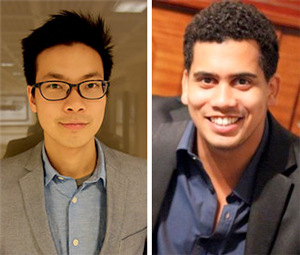 When we think of the works of Felix Mendelssohn, a few that immediately come to mind are his Overture to A Midsummer Night’s Dream, the “Italian Symphony,” and the Violin Concerto, as well as several pieces of chamber music.

On Friday, November 4 at 7:30 pm at St. Paul’s Episcopal Church in Cleveland Heights, Earth and Air: String Orchestra, under the direction of David B. Ellis, will present a program of lesser-known but equally engaging works, “Mendelssohn String Symphonies — Part I” will include early symphonies by Mendelssohn, as well as the Concerto for Piano, Violin, and Strings, written when the composer was 14 years old.

“I knew that the concerto existed, but I didn’t know a lot about it until David asked me to play the solo part,” violinist Solomon Liang said during a recent telephone conversation. “I’m really excited to have the chance to perform it.”

Pianist Megan-Geoffrey Prins said that he knew the piece because a previous teacher of his had performed it. “I remember thinking that it is quite difficult, and I’ll probably never get a chance to play it,” the pianist recalled during an interview, “so it’s funny that this opportunity came along.”

According to Liang, Mendelssohn did not write idiomatically for violin. “There are passages that do not lie very well on the instrument. I’m guessing that because Mendelssohn could play them on the fortepiano, he decided to give them to the violin as well.”

Prins said that the opposite is true of the piano part. “Even at 14, Mendelssohn understood how to write for the piano, and most of the writing actually makes sense. I guess the young composer was a better pianist than violinist.”

Both soloists agree that even as a teenager, Mendelssohn was well on his way to developing his musical voice. “The first time I listened to the piece, I was quite intrigued because it shows him to be very exuberant and curious,” Liang said.

“Overall it’s a very nice piece, especially for his age,” Prins added, “although it feels a bit scattered. There will be a great section, then a couple of bars where it sounds like he’s trying to do what he was being taught in counterpoint class — then there will be more great stuff.”

Both players also agree that the very long first movement, with its mixture of styles, makes it difficult to create a musical arc from beginning to end. “It’s like Mendelssohn is putting everything he had in his imagination into one movement. What struck me the most is how much the recitative section sounds like Mozart opera,” Liang said.

Born in Taipei, Solomon Liang moved to Irvine, California, at the age of 12. He earned his master’s at Yale and an artist diploma at the Cleveland Institute of Music. Currently he serves as principal second violin of the Canton Symphony and teaches at the Aurora School of Music. “I learn a lot from teaching because everything I’m telling my students I can transfer back to my own playing,” Liang said.

A native of Riversdal, South Africa, Megan-Geoffrey Prins received his bachelor’s from the University of Stellenbosch in his home country. Currently, he is a DMA candidate at CIM, where he studies with Antonio Pompa-Baldi. “Like many musicians, I went to a school for the teacher. I had known of Antonio from previous teachers, so I went to one of his festivals in Italy. We got along and he told me to audition,” Prins said.

The violinist and pianist first joined forces in a performance for Musical Upcoming Stars in the Classics, and the partnership clicked. The duo has a number of recitals planned in the near future, including a tour to South Africa.

What makes the collaboration work? “Megan has such great musical chops,” Liang said. “Many times during a first rehearsal with someone you don’t know, you’re just trying to figure each other out. But with him we played through the music, and without saying anything, somehow it just came together. He’s also such a humble human being, and just a great person to be around.”

Prins had complimentary things to say about Liang as well. “Solomon has such an incredible work ethic. He gets into every detail of the music. It’s nice to study a work with him because he points out certain things that I haven’t thought of before. We can spend two hours on something and it never feels like two hours.”

The cimbalom was the feature of the show, an instrument capable of taking on many personas. Its performer, Chester Englander, has shaped his career around the instrument, and has inspired composers to write more repertoire for it, some of which was presented on the program. END_OF_DOCUMENT_TOKEN_TO_BE_REPLACED

You wouldn’t expect that acoustic from a glance at the nave, which is wide and long, but not especially lofty. But when I guest conducted a local amateur choir and professional orchestra in Beethoven’s Mass in C there a few years back, during the first rehearsal we released the final chord of the “Gloria” and listened in astonishment for the next several seconds. The sound continued to roll down the space like the big wave that surfers dream about. END_OF_DOCUMENT_TOKEN_TO_BE_REPLACED