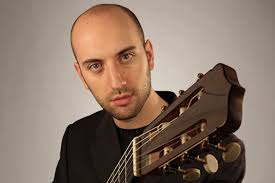 Over the years, the Cleveland Classical Guitar Society has presented a seemingly endless roster of outstanding players on their International Series. That tradition continued on Saturday, March 20 when Emanuele Buono made his series debut with an impressive pre-recorded concert that left you wondering if the Italian guitarist was born with the instrument in his hands.

Seated in front of a white wall adorned with posters and a small collection of guitars, the soft-spoken Buono briefly introduced the first work — J.S. Bach’s Flute Partita in a. From the first notes of the “Allemande,” the guitarist produced a rich, unfettered tone that amplified his well-shaped phrases. The brisk tempo of the “Courante” allowed him to impress with his nimble technical prowess, and the “Sarabande” was defined by subtle changes in color. The tuneful “Bourrée angloise” was so full of life, it made you want to sing along.

Speaking of singing along, Buono then offered three Schubert Lieder arranged by Johann Kaspar Mertz. During Aufenthalt (“Resting Place”) the simple melody floated gracefully above the well-balanced accompanying chords, while the heartbreaking Lob der Tränen (“In Praise of Tears”) was sublime. And his playing of Ständchen (“Serenade”) made you wish you could hire him to play below your window during a first date.

Hans Haug’s Prélude, Tiento et Toccata is an interesting combination of French Impressionism and Spanish flavors sprinkled with modern harmonies. Although the musical material in the first movement is a bit episodic, Buono kept the lines moving forward. The melodic passages of the slower middle movement were soulful, setting the tone for the energetic Toccata. Following the robust introduction, the guitarist was off and running as he effortlessly tossed off complicated technical passages, making quick shifts from one register of the instrument to the other without missing a beat.

The program came full-circle with Gerard Drozd’s Adagio, Op. 44 (“Homage to Bach”). Its sweet melody over simple accompanying lines gradually takes on some laid-back, rhythmic swagger, offering up a more jazzy side to Bach. As he did throughout the program, Buono played with understated, captivating flair.

Emanuele Buono is a man of few words, which only added to the attractiveness of the program. The absence of talking combined with simple camera angles made the performance a listening pleasure — the guitarist let his artistry speak for itself.