The dream of any presenter is to kick off a season with a world premiere of a work written by a celebrated composer. It’s even better when that work is performed by one of the world’s greatest chamber music ensembles. On Tuesday, September 27 at 7:30 pm at E.J. Thomas Hall in Akron, Tuesday Musical will present the opening concert of its season. The evening will feature the world premiere of English composer Mark-Anthony Turnage’s Shroud performed by the Emerson String Quartet, Eugene Drucker and Philip Setzer, violins, Lawrence Dutton, viola, and Paul Watkins, cello.

Shroud was commissioned to celebrate the Emerson’s 40th anniversary. The program will also include Mozart’s Quartet No. 15, K. 421 and Beethoven’s Quartet No. 14, Op. 131. Mark-Anthony Turnage will present a pre-concert talk beginning at 6:30 p.m.

“It’s very exciting for Tuesday Musical to be presenting the world premiere of Shroud,” Jarrod Hartzler, Tuesday Musical’s Executive and Artistic Director, said during an interview. “There were a lot of things that came together for us to get the premiere, but it all began with the relationship that I’ve had with the Quartet for many years. When I was managing the Wooster Chamber Music Series I presented them many times. Because of that I have a nice friendship with Phil Setzer. When he was here last year performing the Beethoven Trios concert with David Finckel and Wu Han, we were talking about the Emerson Quartet. I told him they needed to be back on the Tuesday Musical series —  they haven’t been here since 1991. We talked about some ideas and I said that we should do something big and different — a special project of some kind.”

Then one day Hartzler received an email from the Quartet’s management saying that Setzer had told them that Tuesday Musical might be interested in participating in the commissioning of a piece celebrating the Quartet’s 40th anniversary. “Of course I said yes, so when luck and scheduling came together, it became apparent that Tuesday Musical would have the world premiere. It just worked out on all of those fronts.”

Formed in 1976, the Emerson String Quartet was one of the first quartets whose violinists alternate between the first and second positions. As another innovation, in 2002 they began to perform most of their concerts standing, with the cellist seated on a riser. Over their career the Emerson have made more than thirty recordings, earned nine Grammys (including two for Best Classical Album), three Gramophone Awards, the Avery Fisher Prize, and Musical America’s “Ensemble of the Year.”

In 2013 British cellist Paul Watkins joined the Quartet. We reached him by telephone and began the conversation by asking him how they came to choose Mark-Anthony Turnage to compose the Quartet’s 40th Anniversary commission.

Paul Watkins: I think it came fairly naturally. I’m now beginning my fourth season with the group, and as we got to know each other they were curious as to what my musical tastes were and what kinds of projects I wanted to do in terms of repertoire. It was easy to choose from the great classical pieces, because the Emerson Quartet has pretty much performed and recorded everything. But it was an interesting discussion when it came to commissions. I think they were genuinely interested to see what I thought because of my experience of playing new music — and particularly new British music.

Mike Telin: You do have a lot of experience in the British new music scene.

PW: I was a cellist in the Nash Ensemble in London for sixteen years, a group that has given over 250 premieres of pieces. During those years we developed a close relationship with Mark-Anthony Turnage. I recorded at least two CDs that included his chamber music, and he wrote me a cello concerto four years ago, which I performed in Leipzig, Antwerp, Liverpool, and in Finland.

So I’ve known Mark for a long time and from my point of view he was always at the top of the list. The quartet listened to a number of his pieces and we agreed that it would be a great thing to commission him. So that’s how the piece came about.

MT: Was he given any parameters to work with, or was this a carte blanche situation?

PW: We just let him get on with it. I think that’s how it’s been throughout the Quartet’s commissioning history.

MT: When did you first see the score?

PW: We received a preliminary score at least five months ago, and we’ve been working on it throughout the summer. Mark is not one of those composers who misses deadlines. 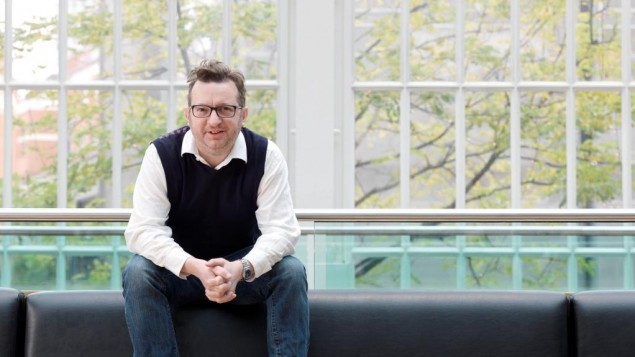 MT: Would you say a few things about the piece?

PW: It’s in five movements, and it’s often a feature of Mark’s to dedicate the pieces or movements to people he knows, or to people he’s recently lost. So this piece is bookended by Threnody (first movement) and Lament (fifth movement), and are both in memory of friends of Mark’s who have passed away in the last few years.

Threnody is the longest of the five. It’s intense, expressive, and complex — sort of the big beast. The piece is similar to a Bartók quartet in that the two outer movements resemble each other. Then as you go further inside the piece, the second and fourth movements are both called intermezzo. The middle movement, the third, is a march, and all three are marked, “for the Emerson Quartet.”

MT: Has it come together easily?

The march is probably a more exaggerated version of Benjamin Britten in that there’s a kind of irony to it. Mark is a great admirer of Britten, and it’s very difficult for any late 20th- or early 21st-century British composers not to somehow have Britten in the back of their minds when they’re writing.

There’s also a lot of Mark’s trademark rhythmical vigor which comes more from the contemporary music world, pop music, jazz, and funk. He’s very much influenced by that.

MT: And the title, Shroud?

PW: To be perfectly frank, we haven’t asked him about that. We’ve been more concerned with notes, tempi, and character, those sorts of things, but I am going to send him an email and ask. Mark is a great and positive person but death does sort of lurk in the background of a lot of his pieces. I’ve played many of his pieces that have titles like Lament or In Memoriam, so I imagine that that may have something to do with it. But I can’t say with any authority why it’s called Shroud.

MT: This is the start of your fourth year with the Emerson. You’re enjoying yourself?

PW: Things are going great. We start every season with a great burst of energy and it feels like a new start in a very positive way. And the way that we interact with each other musically is constantly getting deeper. I’m delighted and very happy. I would not want to be doing anything else.

“Mary’s Song” refers to the Magnificat (“My soul doth magnify the Lord”), sung by the soon-to-be mother of Jesus in response to the message the angel Gabriel delivered to her in the Gospel according to Luke. The text has been set countless times by composers in all eras, largely because the Magnificat is one of the invariable texts in the daily service of Vespers, as well as its Anglican relative, Choral Evensong. END_OF_DOCUMENT_TOKEN_TO_BE_REPLACED

Music director and conductor Daniel Meyer built his playlist around Cleveland themes and scenes. “Exploration CLE” made use of engaging selections from the classical canon and beyond that celebrated “what makes Cleveland so special.” Happily, he and his musicians avoided constructing a visual slide show, choosing to let the music speak for itself. END_OF_DOCUMENT_TOKEN_TO_BE_REPLACED

You could see the relationship at work on a practical level. Repertoire for two players at the same piano requires a certain choreography. There’s just one of each pedal to share, and the hand crossings left and right — which can be so fun to watch a soloist pull off — get more complicated when another person’s involved. At times, Pompa-Baldi drew a hand away from the keyboard and into his body, making room for Friscioni, and at the close of a few delicate phrases, the two were crouched together over the same final notes at one end of the instrument. END_OF_DOCUMENT_TOKEN_TO_BE_REPLACED