Prominent activists will also be celebrated, with Rosa Parks featured by the Cavani String Quartet (June 20) and Greta Thunberg by Earth Music, joined by ENCORE artists (July 11). Though these two figures come from very different time periods, Cho pointed out their shared approaches to making change. “They’re quite vocal with their message, but at the same time they have this kind of quiet, introverted energy about them,” Cho said. “That’s the kind of activism that I aspire to — showing with actions what you do instead of just being loud.”

Thunberg’s passion for the environment is also reflected in Teddy Roosevelt, who championed the conservation of America’s national parks. The former president will be recognized on the Fourth of July concert headlined by Michael Cleveland and his bluegrass band Flamekeeper, a personal favorite of Cho’s. “To see him live in person after eighteen months of silence feels surreal — it’s almost like I’ll believe it when I see it,” she said. 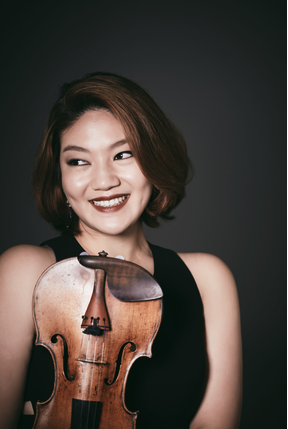 But Cho (left) was quick to add that she is excited about everything. She described choosing between performances “like picking your favorite child!” Violist Mathieu Herzog and violinist Dorothy Ro (stepping in for Gabriel Le Magadure, who cannot attend due to COVID-19 travel restrictions) unite for June 13’s “Sparked by Murakami Haruki,” which will include readings from two of the Japanese author’s works. Cleveland native and jazz vocalist Evelyn Wright and her Jazz Quartet will honor Billie Holiday on June 18 as part of the Festival’s Juneteenth Celebration Weekend, and guitarist JIJI and ENCORE artists will present a wide-ranging July 9 program spotlighting artist Frida Kahlo.

Along with cellist Clive Greensmith, Cho will be performing on a program inspired by Albert Einstein, who she described as “literally the reason why I am a violinist.” Cho’s mom introduced her to Einstein, a keen amateur violinist, in the hopes that something artistic would bolster her daughter’s creativity and prepare her for a career as an astronaut. “Little did she know that violin would have a lot more affinity with me than science,” the musician said fondly.

The July 2 presentation includes Bach and Mozart, who were Einstein’s favorite composers to play during his meditative morning practice. The final piece, Steve Reich’s Different Trains, has a similarly contemplative feel and will also incorporate an element of visual art.

All concerts and discussion panels will take place at the new Dodero Center for the Performing Arts, located on the Gilmour Academy campus in Gates Mills. Other public events include YouTube Live lectures and Saturday morning yoga classes. For young artists, ENCORE’s three-week String Quartet Intensive will take place in-person, followed by the Virtual Summer Academy during the second half. The 35 musicians of the Intensive will study primarily with the Cavani Quartet and will present three free concerts on June 24 and 25.

By featuring local artists and composers throughout the season, ENCORE is strengthening its connection to Northeast Ohio. Cho describes the Festival as their “contribution to the region’s culture,” adding that “making relationships in the community we serve is so important.”

Just as Cho drew on her own inspirations to create this year’s Festival, she hopes that audiences will walk away feeling similarly inspired. “My hope has always been the same — to spark curiosity, artistic and otherwise.”

Visit the website for tickets — $30 for one concert + conversation, $10 for those under 18. RSVP for free events required. The Festival takes place from June 6 through July 17.

END_OF_DOCUMENT_TOKEN_TO_BE_REPLACED

Supported by engagingly, yet simple staging by Cara Consilvio, a well-prepared cast of singers told the archetypal story of Cinderella with charm and flair. Framing the production was  a sparse but colorful set and wonderful lighting by Dave Brooks. END_OF_DOCUMENT_TOKEN_TO_BE_REPLACED