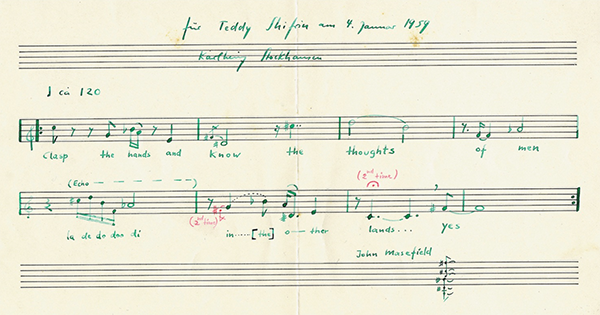 The discovery of an unknown song by Karlheinz Stockhausen provides a humanising footnote to his barnstorming 1958 lecture tour of the US.

Reprinted with the permission of The Wire, the article was originally published in July 2019.

I’d been doing some research into the experimental arts scene that flourished in San Francisco’s Bay Area in the 1950s when I unearthed this curious little score — an unknown vocal piece by Karlheinz Stockhausen buried in the papers of composer Seymour Shifrin at Yale University.

Dated 4 January 1959, the piece was written by the then 30-year old Stockhausen as a present to Shifrin’s young son Teddy. The lyric — “Clasp the hands and know the thoughts of men in other lands” — is the last line of the final stanza of the John Masefield poem The Ship And Her Makers, a romantic paean to the fortitude of maritime explorers that had been published early in the century in Salt-Water Poems And Ballads. At the time he composed the piece, Stockhausen had just completed a triumphant lecture tour of the US, and was ascending to the height of his powers in European new music, with recent compositions including Gesang Der Jünglinge and Gruppen. What, then, to make of this atonal sea shanty?

Stockhausen made his first trip to the US in autumn 1958, for what would turn out to be a barnstorming tour of some two dozen universities organised by his American publisher. He was scheduled to read his paper “New Instrumental And Electronic Music”, playback some of his music on tape, and on several occasions oversee performances of his works.

Stockhausen arrived with his wife Doris in New York City on 2 November and checked in with composer Milton Babbitt, who had helped with the tour arrangements. The next day he plunged into a rigorous schedule of lectures, cocktail parties and airports that would last for six weeks. Starting on the East Coast, he appeared at Columbia, Princeton, MIT and Harvard, where young students Tony Conrad and Henry Flynt were in attendance. He then travelled on to the Midwest (Michigan, Wisconsin, Iowa) and the West Coast, arriving in the Bay Area on 22 November, where he was due to speak at the University of California at Berkeley.

Thanks to the strong hand of Roger Sessions, the music department at Berkeley in the late 50s was a citadel of academic modernism. Its faculty included Andrew Imbrie, William Denny, Robert Erickson (briefly) and Seymour Shifrin — composers whose music today earns respect if few performances. But by the time of Stockhausen’s arrival these ramparts were under siege. Shifrin had recently hosted one of his regular musicales for his composition class at his home, where an incoming grad student named La Monte Young, fresh up from Los Angeles, had a reading of his recently completed Trio For Strings. The arguments had begun, and the shockwaves would soon follow.

Stockhausen started his Berkeley lecture by describing the WDR studios in Cologne and the work of cataloguing electronically generated sounds. Visitors to the studio would hear recordings of forward-looking instrumental works ranging from Webern to Cage and Boulez, and then for comparison the startling first examples of purely electronic music being generated there, including Stockhausen’s own Study I and Study II. Cage is cited repeatedly throughout the lecture for his breakthroughs in chance operations and “freedom of action” for performers in the new instrumental music, but Stockhausen’s insights about purely electronic music are more emphatic. He describes a landscape where the media of radio, tape and gramophone have fundamentally shifted the relationship between music and the listener — where music is recreated, outside the places where that music was originally intended: “All this is heading toward a society that lives, even culturally, out of cans.”

His enthusiasm for purely electronic music — loudspeaker music — is evident for it being “a music that proceeded completely functionally out of the specific conditions of broadcasting”. It also had practical advantages. Stockhausen loved the fact that sound could be generated precisely according to technical data, without having to engage musicians “for hours on end in discussions about the meaning of new music before they will yield a single note”. In an aside, he noted that the same opportunity for creativity based on technology existed in the realm of television, which was then being used “dysfunctionally, that is to say, wrongly.” Young, who was in attendance, later referred to this moment somewhat elliptically in his “Lecture 1960,” writing that Stockhausen “said he tried to let the new medium, the television machine, inspire the form of the composition. At this point someone in the audience said to his neighbour, ‘But I thought music was supposed to be for people’.”

The lecture ended with a look into the future:  new instrumental musical forms are less likely to succeed than purely electronic music, but as with spatial electronic music, one way forward would involve the incorporation into composition of the direction and movement of sounds in space. This was prescient. At that moment, on the other side of the Bay, choreographer Ann Halprin was working through ideas of multidimensional sound performance by experimenting with musicians Stan Shaff, Warner Jepson and Bill Spencer playing and moving among her dancers. La Monte Young would more fully invest in Cage’s ideas after meeting David Tudor (and Stockhausen again) at Darmstadt the following summer, eventually teaming up with Terry Riley to work with Halprin’s Dancers Workshop.

From Berkeley, Stockhausen travelled on to Southern California, where, on 1 December, the scheduled performance of Zeitmasse at UCLA, already postponed once due to lack of proper rehearsal time, was cancelled again for the same reason. Instead,  he played a tape of Gruppen, and Leonard Stein, a former student of Schoenberg, performed the Los Angeles premiere of Stockhausen’s Klavierstuck XI. A critic writing for The Los Angeles Times found it all bewildering: “Without attempting to pass judgment on the music, we can only say that if Mr Stein does his practicing at home we are not sorry he is not our next-door neighbour.” For the final leg of his trip, Stockhausen returned to the East Coast to reconvene with Babbitt, who confirmed Stockhausen’s arrival in a letter to Shifrin dated 18 December, thanking him “for not shooting Karlheinz, so that he could return safely to us benighted heathens, and shower further enlightenment upon those few of us who are prepared to profit from it.” At the end of this whirlwind tour, Stockhausen was back in Europe by the new year.

Michael Kurtz’s Stockhausen: A Biography notes  the importance of this first trip to America for the development of his music. All that time spent above the clouds, flying from city to city, apparently changed his perspective on time and space: “My whole time feeling was reversed after about two weeks,” Kurtz quotes him as saying. “I had the feeling I was visiting the Earth and living in the plane.” He committed to a new way of shaping time, ‘moment form,’ and Carré and Kontakte would soon follow.

One of the few certainties within the turbulence  of 20th and 21st century music is the unwavering intensity of Stockhausen’s proclamations and output. This has been buttressed by countless photos of him that all seem to appear on the narrow expressive band between glaring and glowering. So how, then, to make sense of this previously unknown score which has only just come to light, 60 years after its composition?

A short song written for a five-year-old boy as a thank-you gift on the occasion of Stockhausen’s visit to Berkeley in November 1958, it invites us to reconsider the man. During the visit to Berkeley, the composer and his wife spent a leisurely day with the Shifrin’s hiking in the Berkeley hills. Stockhausen included a couple of snapshots from that afternoon in his thank you letter to Shifrin, and also this short piece written for Shifrin’s son, who had sent Stockhausen home with a gift of his own: “And Teddy made such a stunning calendar for me, that I immediately spent the morning of 4 January to work for him. He is a marvellous boy!”

This curious piece, Für Teddy Shifrin Am 4 Januar 1959, reads like a romantic lullaby — “La de do doo di”, a compositional flourish, is not in Masefield’s original poem. Why was the work of a then octogenarian English poet laureate on his mind? Stockhausen’s passion for poetry in his youth, when he was uncertain whether to become a composer or a writer, apparently stayed with him. The text of The Ship And Her Makers must also have resonated with him at that moment, having made his first trip to the West Coast of America by long distance air travel, to “know the thoughts of men in other lands”. And he was clearly touched by his time with Seymour Shifrin and his family. What Shifrin, who died in 1979, felt about Stockhausen’s visit to Berkeley is not known. Stockhausen’s letter — and composition — went directly into his filing cabinet and stayed there for the next 60 years.

Romantic love has worked its magic and wrought its afflictions on humankind in similar ways throughout history. Last weekend, Cleveland’s Les Délices joined Boston’s Blue Heron to chronicle how 14th-century European composers addressed that subject. The matrix for the collaboration between the ensembles was the celebrated Roman de la Rose, whose earliest layer by Guillaume de Lorris dates from ca. 1230. END_OF_DOCUMENT_TOKEN_TO_BE_REPLACED

Despite predictions of snowy weather, there was a full house and enthusiastic audience at the Bop Stop on Friday evening, January 17, for the latest concert by the Cleveland-based new music group No Exit, collaborating with their Twin Cities counterpart Zeitgeist. The program was concise and wildly varied, with several first performances. Each work contained imaginative soundscapes and alluring musical ideas. END_OF_DOCUMENT_TOKEN_TO_BE_REPLACED