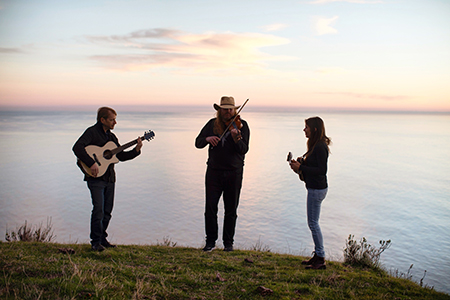 “He was blind and there are stories of him meeting up with Baroque musicians and composers, and sharing tunes with each other. So one of my passions in life is to share the fact that all music is similar in the way that it’s created. It comes from a rhythmical background, and a community background.”

Huizinga said the setlist will be “a potpourri” from the trio’s recording Partita Americana along with some newer pieces. That album is centered around Bach’s E-major Partita. “My friend William will play our version of Schumann’s accompaniments of Bach’s sonatas and partitas, and Ashley and I will share this amazing partita by breaking it up into solo, duo, and trading-off sections.”

The evening will also include Hoyer’s Two Trees. “The incredible Amanda Powell will be joining us for a couple of songs,” Huizinga said. “One is a favorite of mine, Beeswing — it’s a gorgeous story about how delicate life is.” 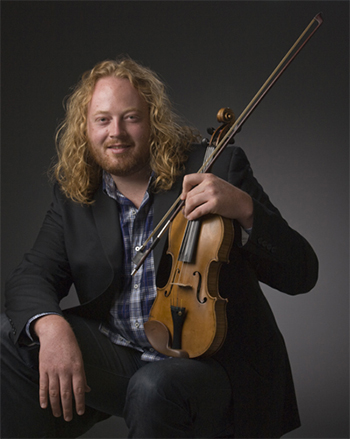 How did the kindred spirits of Huizinga and Coulter meet? “We actually met in Cleveland when we were both hired to perform at an Apollo’s Fire summer concert,” the violinist said.” William was putting together a program of Irish folk music and he was looking for a fiddle player, and Jeannette Sorrell recommended me. It’s funny, he was a little concerned because I was a Baroque violinist and thought, ‘Oh dear, is this guy going to be able to play Irish music?’” Since then the two have toured together and recorded three albums: Fire & Grace, Partita Americana, and Alma.

It was Coulter who introduced Huizinga to Ashley Hoyer in 2018. “We were working on a fun program to celebrate American folk music from the last 200 years for the Carmel Bach Festival,” Huizinga said. “And we felt that violin and guitar weren’t enough to truly showcase that style. Ashley and Bill had known each other for years, so we met, started working together, and from that moment we’ve basically been best friends — she is an incredible mandolinist and composer.”

When asked what makes the three musicians’ personalities click, Huizinga said, “I always say how important it is to be an amazing musician, but your humanity and being a fantastic person is even more important. In my mind, the music comes through so much clearer if you let it happen in your life and you want to share it.”

During our conversation Huizinga talked about the concept of the global musician, which for him means that people are stretching the boundaries of what they want to learn and how they want to live in the 21st-century musical landscape. And a common thread in that landscape is folk music.

“Growing up in rural Canada — the Guelph, Ontario area — there were so many European influences, and when I started getting into American Folk music I felt the same thing. When I was researching the world of Spanish folk music, I found that Galician folk music has tons of similarities to Irish folk music, really to all kinds of folk music.”

Spanish folk music was the subject of Huizinga’s and Coulter’s latest album, Alma. “I met some incredible people in Spain, even online. One in particular is a Galician musician named Anxo Pintos. He wrote a piece called Canro Cru and he was delighted to have us record it.”

The violinist noted that dance is an important aspect of that music. “A lot of our concerts with this album have been in partnership with one of the most amazing Flamenco dancers in the world, Fanny Ara. She’s from San Francisco but grew up in the Spanish part of France — the Basque region.”

Huizinga’s musical life extends well beyond the intersection of folk and classical. He is a member of ACRONYM, a group he co-founded with some classmates at Oberlin. He co-founded Classical Revolution while doing his grad work at the San Francisco Conservatory. He recently conducted the Regina Symphony and serves as artistic director of the Sweetwater Music Festival in Owen Sound, Ontario. And next week, in addition to Saturday’s concert, he’ll be playing with Apollo’s Fire.

END_OF_DOCUMENT_TOKEN_TO_BE_REPLACED

Franz Welser-Möst led the final bows on Saturday night at Severance, like the star of any show should. The Cleveland Orchestra’s music director is in his element presiding over the ensemble’s annual opera production, which this season packs the drama. Verdi’s Otello — in a concert staging that opened May 21 and runs for two more performances (May 26 and 29) — demands big voices, instrumental forces to match, and a conductor who can give it all shape and direction. END_OF_DOCUMENT_TOKEN_TO_BE_REPLACED

The cimbalom was the feature of the show, an instrument capable of taking on many personas. Its performer, Chester Englander, has shaped his career around the instrument, and has inspired composers to write more repertoire for it, some of which was presented on the program. END_OF_DOCUMENT_TOKEN_TO_BE_REPLACED