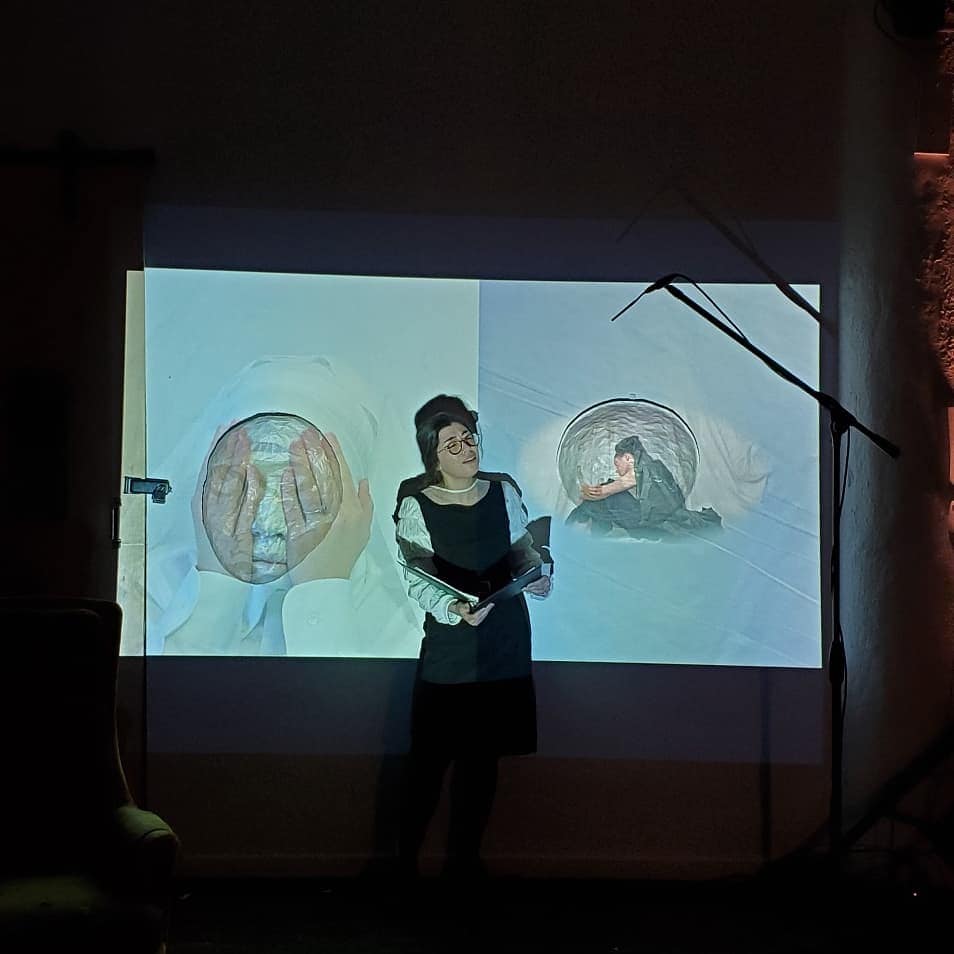 fp Creative is making a slow revolution in how concerts happen. By handing over the reins of each event to guest producers/curators, the organization is empowering musicians to experiment with any facet of how music is presented in their post-industrial venue Snap House Studios. On Thursday, February 20, soprano Melanie Emig was in control for an event titled “Samples,” a fascinating shuffle of vocal music ranging from Hildegard’s elaborate Medieval chant to current alt hip-hop.

Taking advantage of the large studio, Emig placed the performers in various locations around the room and arranged sections of the audience against multiple walls as if in a blackbox theater. With carefully handled lighting and applause held until the end, this concert was an hour-long, continuous stream of highly polished, engaging performances from eleven musicians in some twenty selections across many genres.

Sopranos Naomi Columna, Emig, Elena Mullins, and alto Rayna Brooks were featured in the classical music of the evening. That included uniformly excellent performances of early music: a duo by Barbara Strozzi (Emig and Mullins) and a solo by Francesca Caccini (Mullins) were precise and stylish with the help of theorbist Jeremy Bass. The highlight was Mullins’ rhapsodic and rapturous rendition of Hildegard von Bingen’s Item de virginibus. The new music either featured a cappella singing, including short works by Caroline Shaw and Amanda Ferry, or avant-garde solos: a humorous Dadaeque text piece by Georges Asperghis performed to the hilt by Emig, and Columna’s performance of a surreal work by Robin Estrada for which the soprano also contributed a video.

On the other side of the musical spectrum, Case Bargé (with an unidentified guitarist) and Seyu both performed their own works. Bargé’s delivery was smoothly staccato in his two alt hip-hop songs over looped guitar beats, while Seyu’s funky R&B/hip-hop, both in her crunchy laptop grooves and guitar backing, was powerfully psychedelic. Singer and guitarist Liz Bullock brought two covers — a blues tune by Elmore James and a soul classic by Sam Cooke — along with her own haunting original. Bullock’s moving performances achieved their power through her style, unhurried with a tinge of sadness.

Bridging this stylistic chasm were two excellent folk selections from musical chameleon Amanda Powell. With percussionist Justin Gunter, she gave a vigorously rhythmic and stylish reading of a Bulgarian folk song. Then she accompanied herself at the piano, effectively jazzing up a Mexican folk song.

The only miscalculation of the evening was a weak attempt at one of Pauline Oliveros’s Sonic Meditations. In the context of the concert, the directions read out loud may have seemed like a text piece rather than a guide for the audience to listen and sing. Therefore the spine-tingling collective musical experience that Oliveros calls for didn’t build into much before it petered out.

Although the close juxtaposition of so much music might come off as discombobulating, Emig and fp Creative produced a perfect experience for the modern musical omnivore.

Jackson began the program with a recitation of Langston Hughes’ poem “Helen Keller” — the first of five poems by Hughes that served as interludes between each piece on the first half. END_OF_DOCUMENT_TOKEN_TO_BE_REPLACED

Pianos with pins and tape on strings, a bass drum and tam tam, crotales, Almglocken, and vibes. Microphones were hooked up all around the instruments. The feed was sent to speakers around the room. Lighting designer Nicholas Houfek hung incandescent globes over the arrangement of instruments from thin black wires stretching across the beams. END_OF_DOCUMENT_TOKEN_TO_BE_REPLACED

From the podium, Elim Chan set an ambitious tone for the evening. The rising star conductor, here in her Cleveland Orchestra debut, has a commanding style, and every twist and turn in Saturday’s performance tracked closely with her baton. END_OF_DOCUMENT_TOKEN_TO_BE_REPLACED