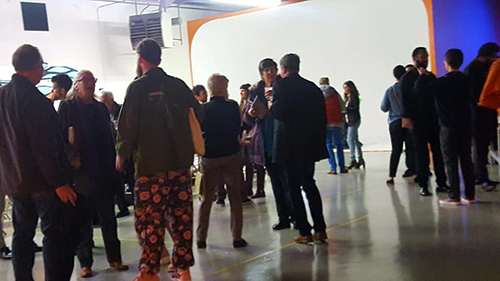 Walking into the Lab Studios by Glo, around 6:45 pm on Friday, November 2, I was met with a large crowd standing just inside the door listening attentively to poetry being recited from an adjoining, grotto-like space. Attractive art decorated the walls and a makeshift bar was set up in a kitchen area, while high-top tables held snacks. An area for a DJ was located against the back wall adjacent to a white stage area that resembled an in-ground pool turned on its side. It was clear from the get go that the evening was not going to be an ordinary classical music concert presented in an alternative space — this was going to be a happening. But that’s exactly what Devin Hinzo, who serves as Glo’s Resident Artist and Music Programming Coordinator, promised his “Fresh Perspectives” series to be. 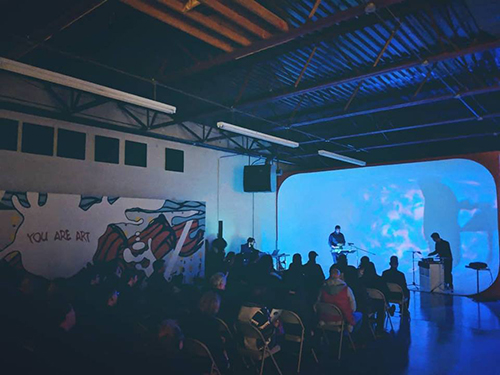 Following the engaging poetry, DJ Pika entertained the crowd with dance rhythm tracks while they mingled throughout the 5,000-square foot warehouse space in Cleveland’s Superior Arts District. The concert, “Then & Now: the evolution of tradition,” featuring music for solo instrument + electronics and a new collaborative work for oboe, hip-hop dancer, and laptop, was slated to begin at 7:30 pm. And it did. 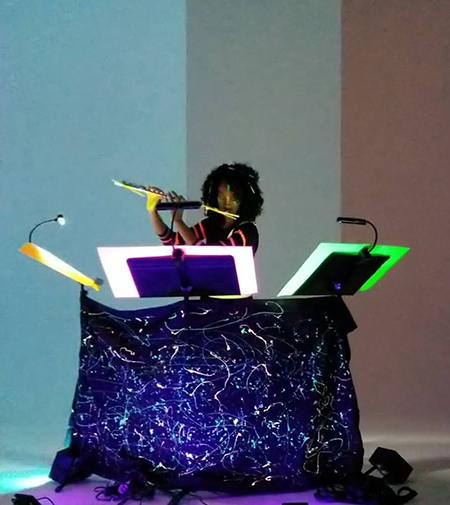 Bathed in colorful light, flutist Brittany Trotter kicked things off with Brian Raphael Nabors’ engrossing Énergie for flute and 2-channel electronics. The growling electronics were juxtaposed with sharp accents in the flute. Trotter stylishly moved in and out of the vivid electronic terrain that underpinned Nabors’ work. 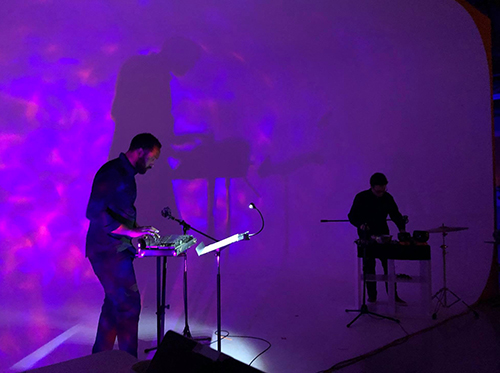 Next up was Brooklyn-based composer Ivonne Paredes’ magically hypnotic Fantasmagoria for live electronics (Graham Rosen), glockenspiel (played with thimbles by Torrell Moss), and improvised percussion (Justin Gunter). The players brilliantly created a feeling of the supernatural — a world with an eerie landscape. The audience was perfectly still as the tinkling sounds faded into deafening silence. 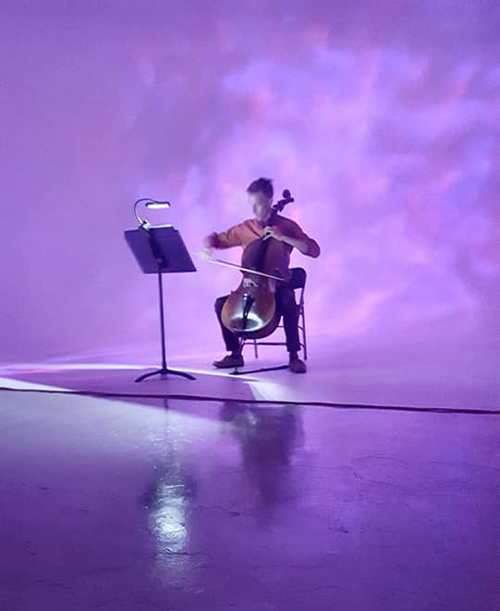 Kellen Degnan brought unabashed energy to Carolina Hereida’s Añoranzas for cello and electronics. Degnan easily fluctuated between fast and smooth, lyrical lines, over the digital sounds, making the most of the brief, scintillating work.

During a 30-minute break, the audience was treated to another round of poetry (read by Andrea Doe and Eva Barrett) and had time to mingle as the space was reset for the program’s second half.

Violinist Julian Maddox brought a full, rich sound as well as dynamic and color contrasts to the “Allegro Assai” from J.S. Bach’s solo violin Sonata in C. His playing of the “Preludio” from the composer’s Partita in E, was defined by assured technique and crisp articulations. The performance also served as a prelude to the final work on the program, Elizabeth Hoffman’s Three Worlds for oboe (Devin Hinzo), dancer (Ron’dale Simpson), and multimedia (Hoffman). 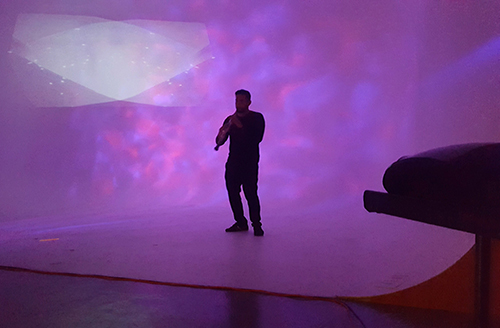 Created for this concert, Three Worlds is a captivating work that causes one to think about the answers to projected questions such as “Do you remember the last sound you heard?” and “What do you hear now?” Hinzo seamlessly wove the atmospheric oboe line with the Gaelic-sounding electronics while Simpson’s neo-classical/jazz dance movements smoothly brought him from one side of the performance area to the other.

The theme of the work —  of bringing people from different backgrounds together for a common purpose —  was fully realized as Hinzo, senza oboe, joined Simpson in inventive and sometimes athletic unison choreography that evoked the music wonderfully.

Hats off to Hinzo and all of his collaborators for creating a fun, entertaining, and artistically satisfying evening. The next event in the “Fresh Perspectives” series is on January 25.

Supported by engagingly, yet simple staging by Cara Consilvio, a well-prepared cast of singers told the archetypal story of Cinderella with charm and flair. Framing the production was  a sparse but colorful set and wonderful lighting by Dave Brooks. END_OF_DOCUMENT_TOKEN_TO_BE_REPLACED

END_OF_DOCUMENT_TOKEN_TO_BE_REPLACED

The music isn’t easy to play, either. Over the course of two hours, all of the musicians brought fantastic focus to the unrelenting tricky rhythms and countless layers of parts, all of which require a high level of individual responsibility. Even in the moments of calm, the accompaniment remains perpetually unsettled. Adams — who made a sprightly presence on the podium — combines minimalist, repeating motives in gradual layers, which eventually become so dense they overwhelm the senses. Lisa Wong deserves special mention for her thorough preparation of the Cleveland Orchestra Chorus, as does Jennifer Rozsa for the Children’s Chorus, which made a brief but memorable appearance in the last few minutes. END_OF_DOCUMENT_TOKEN_TO_BE_REPLACED