Correspondent Nicholas Jones and CC.com staff Daniel Hathaway and Mike Telin have been leading an Oberlin Winter Term course in Digital Musical Journalism during the month of January. Here are Nick’s reflections on a recent performance at Lorain County Community College, tattled from his blog, “The World As Museum”. 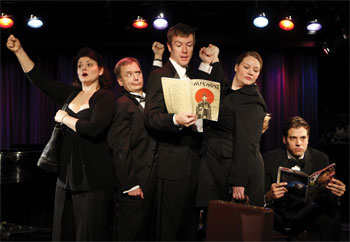 We went to hear a cabaret show by a small touring group from the New York Gilbert & Sullivan Players last night at the community college. They were performing a review called “I’ve got a Little Twist” (a witty take-off on “I’ve Got a Little List,” of course), which segued in and out of Broadway and G & S. Their take on it was that G & S were the real founders of Broadway musical theater, and they showed us nice parallels: maybe the best was the connection of the patter song (“I am the very model of a modern major-general” from Pirates of Penzance) with Broadway numbers like “Pick-A-Little, Talk-A-Little”, from Music Man. Here’s a video from the opening number of “Twist” that will give you a better sense of it.

The show was fun—lively, flexible, full of broad humor and a few lovely musical moments. Its premise, though, got me to thinking not so much about the similarities between G & S and Broadway  — “Twist”’s theme, really — but the differences. You might think first — I did — that we’d say G & S is: old, a little stuffy, elitist, too “classical” to be really popular; and that Broadway is the opposite — modern, popular, connected to its audiences, definitely anti-“classical.” I can’t differ with G & S being old and Broadway more modern. But listening to these songs together made me think that G & S is actually closer to popular music than Broadway is.

That’s a little extreme, of course, and I can’t say it works all around. Ruddigore, with its literary allusions to Gothic romance; Patience, with its witty reworkings of the wit of Wilde . . . these are not essentially populist elements. And certainly Broadway tunes like “Doe, a deer” or “Oklahoma” are pretty popular. But a lot of Broadway is musically difficult, sophisticated, “modern” like the difficult classcial modernists (Copland, maybe?). Last night, David Auxier sang Cole Porter’s remarkable “Every Time We Say Goodbye.” Yes, a great tune, a moving one, but try singing it yourself. Not quite so easy, with its complex harmonies and perilous intervals. Here’s Annie Lennox singing it (from the quirky Derek Jarman film, Edward II). Is this really popular music, deriving from the people and accessible to the people?

It struck me that G & S had a deep connection to the 19th-century British popular musical traditions that Broadway had lost: parlor music. Parlor music: the singable, playable tune that an amateur can handle. Take “Ah, leave me not to pine.” Here’s a clip with Jude Law singing the song, not well, but convincingly as part of a Victorian parlor scene (he’s playing Oscar Wilde’s love interest, Lord Alfred Douglas, in the film Wilde).

Patter songs might be beyond the range of most parlor-music amateurs (though of course Math professor Tom Lehrer made one of the greatest of all in his Elements Song). But the ballads — call them arias if you like — that Sullivan was so good at are still singable, and tunes that people can remember and produce on their own. Can we do that with, say, “Soliloquy” from Carousel?

I think if we went deeper, we’d probably add two other traditions that G & S and their audience shared — and which are not part of the musical culture of Broadway: church music (the hymn, the motet, the anthem, the weekly practice of singing together in harmony and polyphony) and the music hall (the patter song again, the topical satire, the off-color number ducking just under the censor’s pen).

The cimbalom was the feature of the show, an instrument capable of taking on many personas. Its performer, Chester Englander, has shaped his career around the instrument, and has inspired composers to write more repertoire for it, some of which was presented on the program. END_OF_DOCUMENT_TOKEN_TO_BE_REPLACED

You wouldn’t expect that acoustic from a glance at the nave, which is wide and long, but not especially lofty. But when I guest conducted a local amateur choir and professional orchestra in Beethoven’s Mass in C there a few years back, during the first rehearsal we released the final chord of the “Gloria” and listened in astonishment for the next several seconds. The sound continued to roll down the space like the big wave that surfers dream about. END_OF_DOCUMENT_TOKEN_TO_BE_REPLACED