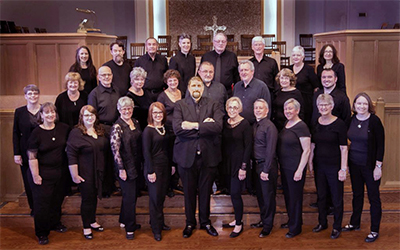 Good Company: A Vocal Ensemble presented what was likely the biggest project in the group’s 23-year history this past weekend — a two-day residency with Ola Gjeilo (pronounced yay-loh), a Norwegian-born composer now based in the United States. On Saturday, November 3, Gjeilo led a workshop about his music with members of Good Company and singers from Bay Village High School and elsewhere. On Sunday afternoon, Good Company music director Mike Carney led a concert of fifteen of Gjeilo’s works to a packed sanctuary at Lakewood Presbyterian Church, with the Amethyst Strings and the composer at the piano for several selections.

Gjeilo has amassed a large following in recent years for his extensive choral output, much of which has been recorded by well-known ensembles, including Voces8 and the Choir of King’s College, Cambridge. His music is tonal and non-threatening, but spiced with enough dissonance to provide interest, and his style is liberally influenced by other composers and genres — John Rutter, Morten Lauridsen, minimalism, and film music. The choral works are often based on liturgical or biblical texts.

The peril of programming a concert of a single composer’s works in a consistent style is that the music all starts to sound the same. Two of the most interesting works on the program were early Gjeilo. The Spheres, for chorus and strings, is a setting of the Kyrie Eleison from his Sunrise Mass, with striking long chords overlapping each other to create the effect of echoes. Serenity is a magnificent setting of the Christmas text “O magnum mysterium” for choir and solo cello. The opening section emphasizes silence as part of its development, before moving onto a more rhapsodic central section. The opening music returns at the end, but with the silences collapsed. Kent Collier was the excellent cellist. 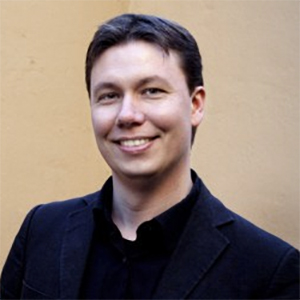 Gjeilo’s unaccompanied setting of the Maundy Thursday liturgical text “Ubi caritas” is modeled on Maurice Duruflé’s setting. In this performance, the composer improvised a piano accompaniment that included jazz elements, French harmonies, and impressionistic sororities. Sacred Heart, a setting of the second stanza of the “Ubi caritas” text, was a natural follow-up. It simulates a minimalist chant, similar in style to those created for the Taizé community.

Among Ola Gjeilo’s attractive settings of Christmas texts were the flowing A Spotless Rose — a reasonable alternative to Herbert Howell’s famous version — and Ecce Novum (“Behold a new joy”). Both are worthy additions to the repertoire.

Good Company’s choral sound was mostly well-blended, with generally good intonation, although greater precision in tuning would have been desirable, especially in the unaccompanied works with tight harmonies. There were occasional insecure entrances in key spots. Gjeilo’s music might sound straightforward, but its subtle intricacies make it more difficult to perform than it seems.

At times, the sonorities of the string ensemble plus piano overwhelmed the chorus. In these cases the sopranos and altos especially sounded underpowered. At almost two hours in length, this was a generous program. Fewer works to prepare might have led to greater security in performance, while still providing the audience with a representative sample of Gjeilo’s works.

END_OF_DOCUMENT_TOKEN_TO_BE_REPLACED

The strings-only work by Berg has made relatively frequent appearances on the Orchestra’s programs. In 2021, the musicians recorded it for the In Focus series, and it appeared again on last year’s European tour. Friday’s rendition maintained the group’s characteristic light and effortless playing, each section blending as much as possible to echo the work’s original form as a string quartet. At fifteen minutes total, the piece is quite short, but the dense encoded musical meanings require some extra-attentive listening. Splitting up the three movements ensured that each one could be appreciated on its own. END_OF_DOCUMENT_TOKEN_TO_BE_REPLACED