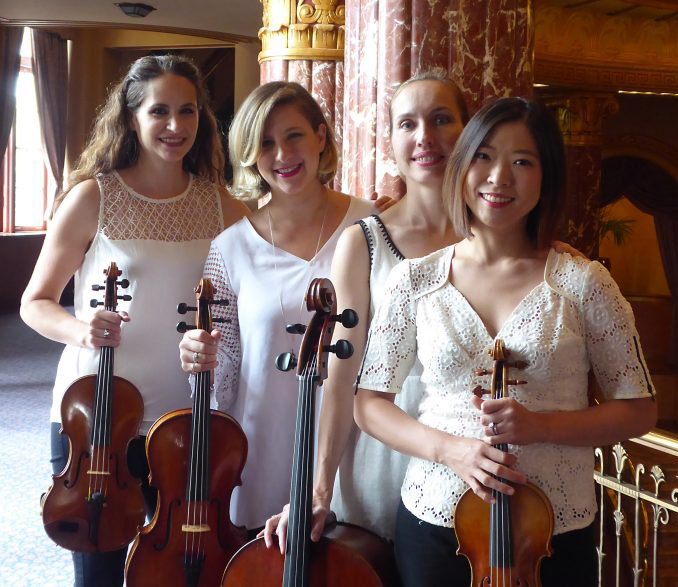 Mid-February finds most Northeast Ohioans in a kind of limbo. A month remains before the sun once again shines for twelve hours a day. At a time of year like this, it helps the listener cope when musicians kindle sonic warmth. Playing in an intimate setting that looked out on the sparse, snow-dusted gardens of the Dunham Tavern Museum in Cleveland, the Omni Quartet and four guest players did just that on February 10, in an installment of Heights Arts’ Close Encounters Chamber Music series designed to combat the deepest winter blues.

Warm sounds filled the Museum’s barn from the start, despite the fact that the first piece on this program can sometimes come across as chilly. Violinists Amy Lee and Alicia Koelz, violist Joanna Patterson, and cellist Tanya Ell approached Ravel’s String Quartet not as a cerebral exercise, but as a crackling hearth of tones, textures, and harmonies. Sparks flew, as in the transitional moment of the first movement when the pulse quickened only to die down just as suddenly. Yet many of the performance’s first few minutes smoldered instead, overtones ringing as the first movement came to an achingly gorgeous close.

The Quartet rendered the opening plucks of the second movement in rigid, authoritative fashion, foreshadowing a final crunch that registered as grim humor. Between these moments, the variety of appealing timbres and distinct melodic ideas felt decadent, like a room piled with comfortable blankets in diverse patterns. In the third movement and throughout, Ell served as the supportive spine and occasional leader of the ensemble, and Patterson’s viola sang with fleecy lushness. Led by Lee and Koelz, the Quartet read Ravel’s finale as modernist music: bowing with an intensity that many ensembles would reserve for Bartók, they made a strong case for their high-energy interpretation.

Next, violinists Yun-Ting Lee and Isabel Trautwein, violist Eliesha Nelson, and cellist Paul Kushious joined the Omni for a dynamic reading of Mendelssohn’s Octet. If Ravel’s Quartet gave audiences a warming fireside reverie, then this piece showed them an internal-combustion engine firing on all cylinders. The first movement found this larger ensemble switching gears and ratcheting from tension to relaxation just as nimbly as the quartet had before. Taking turns on the accelerator pedal, they collectively bounced in their seats as the first-movement finish line approached.

Something of the seasonal gloom outside crept into the second movement, though the musicians’ harmonic shifts remained crisp and clear as ever. The third movement neither rushed nor lagged, thrumming along through a haunted landscape and ending on a dramatic diminuendo that prompted appreciative chuckling in the audience. Kushious sped by in a blur to initiate the finale’s iconic whirlwind of imitative entrances. Amy Lee led from a position of clear authority as the ensemble demonstrated its mastery of the collective swell and retreat — first-rate musical pyrotechnics.