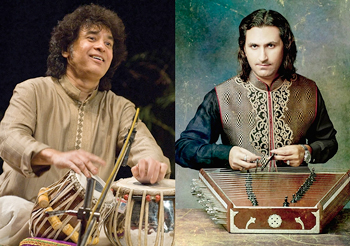 Rahul Sharma first learned music and the santoor from his father, the legendary Pt. Shivkumar Sharma. Since then he has become a leader in the world of Indian classical and fusion world music.

Hussain last played at the Museum in 2004 with his Masters of Percussion Tour. “The first time I performed in Cleveland was back in the ‘70s when my band — with John McLaughlin and L. Shankar — opened for Carlos Santana,” Hussain said during a recent telephone conversation from his home in San Francisco. “I look forward to coming back.”

When asked about Wednesday’s concert, Hussain was quick to point out that the evening is not just about him. “Rahul is one of — if not the finest — young santoor masters of our time. He’s the lead instrumentalist and I’m the drummer. He will handle the melodic aspect and I’ll be supporting it with the rhythmic aspect. We’ll have a musical conversation.”

Hussain said that he enjoys collaborating with Sharma in part because they know each other so well. “For almost 40 years I played with Rahul’s father, Shivkumar Sharma,  the greatest santoor master of all time. He was the person who introduced the instrument into the world of Indian classical music, and Rahul has been a worthy student of his father.”

Hussain explained that the elder Sharma introduced the santoor to Indian classical music in the 50s. His father also performed in Bollywood film sessions, as well as scoring music for Indian films. “That’s where he learned how to work with orchestras, and how to compose music in a lighter, more popular way. And Rahul has brought his own sensibilities to the music, because he grew up listening to jazz, pop, hip-hop, and electronica.”

Having performed with the likes of Joe Henderson, Van Morrison, Pharoah Sanders, Bela Fleck, Edgar Meyer, and Herbie Hancock, Hussain said that their influences have crept into his musical DNA. “Not to water down the Indian music, but these other tastes can be injected into the musical dish you are preparing on any given day.”

But musical influences of many genres have been part of Hussain’s life from the time he was a young boy. “I remember when my father was touring with Ravi Shankar he would bring home records of Yusef Lateef, Miles Davis, Duke Ellington, Jefferson Airplane, Grateful Dead, and The Beatles,” he said. “I’d be walking around my neighborhood with a boombox on my shoulder playing the The Doors as loud as I could.”

Hussain said that Wednesday’s program will be grounded in 2,000 year-old traditional music that is defined by an element of improvisation. “What’s interesting is that both of our instruments are young in the world of Indian classical music. The santoor has been around for only 70 years, and the tabla for three hundred.”

Like Sharma, Hussain’s father was also his teacher, although his first lessons did not include playing the tabla, and focused only on learning to sing and improvise rhythms. “The idea is to get your brain to learn the rhythms the same way you learn a language. And having to recite them over and over again allowed my brain to digest them, which then allowed me to transport the rhythms to my hands in real time so that I could improvise at a gallop — as opposed to thinking about what I should do next. It’s like jazz musicians who sing their solos as they’re playing them.”

A child prodigy, Hussain was in the company of the great Indian maestros from the age of six — by the age of twelve he was regularly performing with musicians who were in their fifties and sixties. And when he arrived in San Francisco in the early ‘70s he was inspired by talented non-Indian musicians who were living there. “I was able to bend a little bit with what I was doing musically, and because I was with like-minded people who were willing to come my way a little bit as well, we were able to try new things. But back then music moved forward at a more elegant pace whereas today it jogs and even sprints.”

Hussain said that there are many young musicians these days who play incredibly well and continue to come up with new ideas. “The great jazz drummer Eric Harland is somebody I would like to explore rhythms further if I get the chance. And it would be great to explore our combinations even further with Béla Fleck. There are also many wonderful young Indian musicians. I hope to continue bringing them to the stage so they can be heard, like I am doing on this tour with Rahul.

Jackson began the program with a recitation of Langston Hughes’ poem “Helen Keller” — the first of five poems by Hughes that served as interludes between each piece on the first half. END_OF_DOCUMENT_TOKEN_TO_BE_REPLACED

Pianos with pins and tape on strings, a bass drum and tam tam, crotales, Almglocken, and vibes. Microphones were hooked up all around the instruments. The feed was sent to speakers around the room. Lighting designer Nicholas Houfek hung incandescent globes over the arrangement of instruments from thin black wires stretching across the beams. END_OF_DOCUMENT_TOKEN_TO_BE_REPLACED

From the podium, Elim Chan set an ambitious tone for the evening. The rising star conductor, here in her Cleveland Orchestra debut, has a commanding style, and every twist and turn in Saturday’s performance tracked closely with her baton. END_OF_DOCUMENT_TOKEN_TO_BE_REPLACED