The following evening, July 21 at Blossom Music Center, Ling and The Orchestra will focus on the participants in the 50th annual Kent Blossom Music Festival. The concert will begin at 7:00 pm, when Vinay Parameswaran will lead the Kent Blossom Chamber Orchestra in Prokofiev’s Symphony No. 1 (Classical) and de Falla’s Suite No. 1 from The Three-Cornered Hat.

At 8:00 pm that student ensemble will join The Cleveland Orchestra and Jahja Ling in a side-by-side performance of Berlioz’s Overture to Benvenuto Cellini, and Vaughan Williams’ Serenade to Music featuring the Blossom Festival Chorus. The marathon event will continue around 9:00 pm when Ling and TCO return to the stage for Mahler’s Symphony No. 1 (“Titan”).

Sepulveda went on to say that KBMF students also used to perform on the Blossom stage prior to  Cleveland Orchestra concerts in what used to be called Pre-concert Serenades.

What is believed to be the first actual side-by-side concert was held on August 5, 1990 under the direction of then Blossom Festival director Leonard Slatkin. On that occasion, students joined The Cleveland Orchestra in a performance of Slatkin’s own compilation of various composers’ orchestral arrangements of Mussorgsky’s Pictures at an Exhibition. 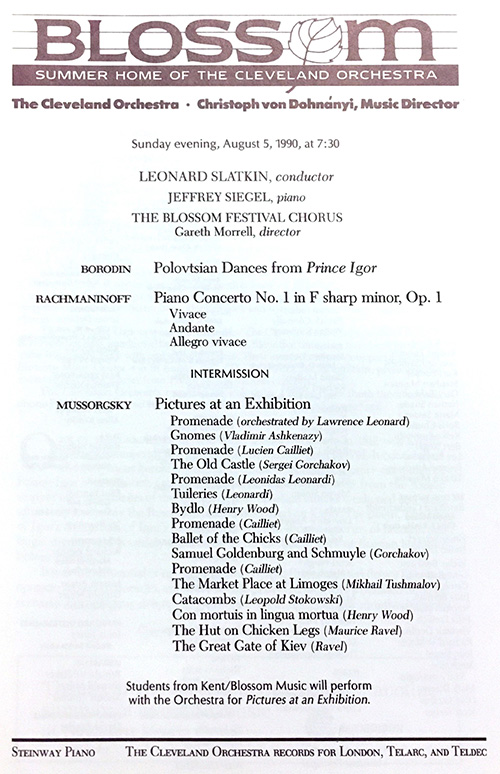 When selecting the repertoire for the Kent Blossom Chamber Orchestra’s portion of the program, Vinay Parameswaran said it was important to choose works that would not only showcase the young musicians, but also provide the participants an opportunity to perform on Blossom’s stage. “Prokofiev’s ‘Classical Symphony’ was one of the first pieces that came to mind,” Parameswaran said during a recent telephone conversation. “It’s a virtuosic showpiece for the entire orchestra. The chamber orchestra isn’t large, but this a piece that fits the numbers we have — and it gives everyone a workout.”

In his program notes, musicologist Peter Laki points out that Prokofiev’s “early works seemed to be all about defying authority.” Laki goes on to say that “Nonetheless, in one of his first works written after the revolution broke out, Prokofiev went out of his way to appear non-revolutionary.” Completed in 1917, the Symphony’s subtitle “Classical,” was given to it by the composer because the piece is based on the style of Haydn.

“It’s a piece that these musicians will have to play a lot in their careers,” Parameswaran said, “so if they haven’t played it before, they’ll have the chance to do it here. It’s so full of humor and life. Prokofiev was quite the comedian in his music and in this early work you get hints at that musical language. I think it’s a charming piece — just fifteen minutes of fun.”

Manuel de Falla’s The Three-Cornered Hat also had its beginnings in 1917, when the composer wrote music for novelist Pedro Antonio de Alarcón’s novel The Magistrate and the Miller’s Wife. In 1919 Sergei Diaghilev, director of the Ballets Russes, premiered his ballet — for which de Falla expanded the score — under the title of The Three-Cornered Hat. (The magistrate wears a three-cornered hat as his badge of office.)

“I love the entire piece,” Parameswaran said. “In some ways I think de Falla is an underrated composer — his music isn’t played as much as it should be. The 2nd Suite is played quite a bit, but Suite No. 1 isn’t performed nearly as often. It’s great that we can play a work from that era that includes both piano and percussion.”

The conductor said there are advantages to performing these works with smaller forces. “You don’t have as many balance issues. I do love having a huge group because the power you get is unmatched, but it’s a lot of fun hearing a smaller group play these pieces.”

Parameswaran and the Kent Blossom players will meet for the first time on Monday July 16. “They don’t know me and I don’t know them, but the way I always approach a first rehearsal by playing through everything. I think it’s important that the players get a sense of how I communicate to them, and I get a sense of how they respond to me.” He added that after the feeling-out process, they can start digging deeper into the details.

“We only have a few days to put this together and obviously there’s a lot of talent in the group, so I’m not worried about them being able to play the notes. But there are skills that you gain with the experience of playing in a group and knowing one another. It’s always good to highlight some orchestral skills, like making sure they are listening to one another, and that they come to the rehearsal with an idea of what is going on in the entire orchestra and not just their part.”

This concert is one that Parameswaran said he has been looking forward to for some time. “I know there’s going to be a lot of great energy,” he said. “What’s great about a group like this is that they are at the Festival because they love the music. They want to learn and they want to be challenged. They will get that with this repertoire and by getting to work with all of the great Cleveland Orchestra coaches.”

Saturday’s concert will be presented with Image Magnification (IMAG) — live video of the performers displayed on LED screens in the Blossom Pavilion. Tickets are available online.