On Saturday, April 29 at 7:30 pm in Ludwig Recital Hall, Kent State University’s Hugh Glauser School of Music will honor legendary composer and KSU alum Donald Erb with a “90th Birthday Concert.” The evening will also include the unveiling of the new Donald Erb Collection in KSU’s Performing Arts Library, based on material donated by the late composer’s wife, Lucille Erb. The performance is free.

“The collection includes many standard items like CD’s, scores, and parts,” Wiley said during a recent telephone conversation. “There are also original rehearsal scores with all of Don’s markings, like corrected notes and dynamic changes — he was very good about marking the changes in red. It’s fascinating to see.”

Born in Youngstown, Ohio, on January 17, 1927, Erb began studying the cornet at age six, and played jazz trumpet and arranged music for dance bands during his teen years. A graduate of Lakewood High School, he went on to serve in the Navy. He later earned a bachelor’s degree in trumpet and composition from Kent State University, a master’s from the Cleveland Institute of Music, and a doctorate from Indiana University.

Erb was the recipient of many fellowships, grants, and awards. He served as resident composer at the American Academy in Rome, artist-in-residence at the University of Wollongong in Australia, and composer-in-residence for the Dallas and St. Louis symphonies. He served as the head of the composition department at the Cleveland Institute of Music for more than 40 years.

Donald Erb, Cleveland’s most illustrious and controversial 20th-century composer, explored fresh sonorities and forged new paths in more than 100 boldly imaginative works. He shocked the audience in 1965 when the Cleveland Orchestra first performed his Symphony of Overtures. At the end, the composer was booed and pelted with pennies.

As prolific a composer as he was, what influence has Erb had on the music of today? “The thing that everybody talks about is electronic music, and his New York Times obituary made note of that,” Wiley said. “That was a big deal, but I think his later pieces, which didn’t emphasize electronics that much, had more impact on the music of today.” 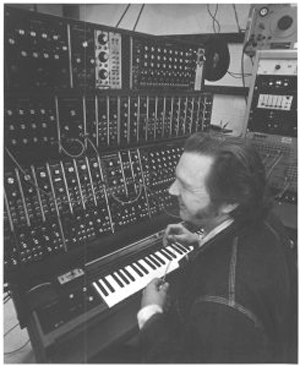 Although Wiley noted that many of Erb’s compositions do not make great dinner music, he believes that it is Erb’s passion and conviction that attract younger composers and performers to his music.

“You do hear Erb’s personal style already in his Reconnaissance from 1967, which may be the first piece that combined electronic and acoustic instruments,” Wiley said. “But his masterpieces are the late, big orchestral works which are life-summarizing — they are looking toward death, but not in a negative way. Ritual Observances is one of those, and another one is Evensong. He was looking at the world in a profound, retrospective way, while writing powerful music with a big dynamic range which I think is even greater than Mahler’s in terms of soft to loud.”

Like his music, Wiley said that Erb’s personality was larger than life. Again, Salisbury writes:

During a rehearsal of the Cleveland Orchestra’s next commission, Music for a Festive Occasion (1975), the feisty composer got into an onstage altercation with music director Lorin Maazel. As a result, the ensemble ignored Erb for nearly 15 years.

“I’m not sure if all of the stories about Don are completely true, but if you knew him, you could see him doing these things,” Wiley said, laughing. “I studied with him for my doctorate, and after I returned to the area to teach at Kent, we became good friends. My wife and I had cars that, well, should not have been driven, so whenever they broke down when we were in Cleveland, we would always stay with Don. That became an ongoing joke.”

As an undergraduate at Kent State, Donald Erb studied theory with Hugh Glauser, after whom the School of Music is named. Wiley described Glauser as an old-school theory teacher who wasn’t interested in being published, or in teaching graduate students. “Hugh had a conservatory-style undergraduate approach with a strong emphasis on theory, keyboard skills, sight singing, and harmonic analysis. Don was one of his first students, and Hugh was a big influence on him. They remained friends for many years until Hugh’s passing.”

Erb continued to surprise even his closest friends up to the very end of his life. “He wanted a military funeral,” Wiley said. “We all knew that Don was in the Navy, but we never thought of him as a military person. Those of us who were around Don for so long never saw that part of him.” Donald Erb died at his home in Cleveland Heights on August 12, 2008 at the age of 81. He is buried in Lake View Cemetery.

END_OF_DOCUMENT_TOKEN_TO_BE_REPLACED

Rodgers & Hammerstein’s Cinderella was originally produced for television in 1957 — seven years after the animated Disney film was released — and starred Julie Andrews. According to the Rodgers & Hammerstein website, it was viewed by over 100 million people. END_OF_DOCUMENT_TOKEN_TO_BE_REPLACED

The story line has its origin in an 1855 play and an 1842 farce that Thornton Wilder mined for his 1938 play The Merchant of Yonkers. When that turned out to be a flop, in 1954 Wilder made the crucial decision to re-center the show around the character of the legendary marriage broker Dolly Gallagher Levi and renamed it The Matchmaker. END_OF_DOCUMENT_TOKEN_TO_BE_REPLACED

The Dodero Center for the Performing Arts at the Gilmore Academy in Gates Mills is one feature of an impressive campus. The auditorium is shallow, the stage is deep, and the ensemble played without a shell. Throughout the program, the sound, especially in instruments’ lower registers, tended to disappear. END_OF_DOCUMENT_TOKEN_TO_BE_REPLACED