Learning and putting together Olivier Messiaen’s Quartet for the End of Time is a scramble against time. The piece features complicated rhythms (sometimes notated without time signatures), infinitely long phrases, and complicated layering of parts. György Ligeti’s Horn Trio and Schoenberg’s First Chamber Symphony are similarly difficult works. But students at Kent/Blossom Music Festival (KBMF) are assigned to learn them in two weeks for performance.

“Two weeks is just enough time,” said Keith Robinson, artistic coordinator of Kent/Blossom, professor of cello at Kent State and KBMF, and cellist in the Miami String Quartet, who gave a recital as part of the festival. “You want something that will challenge them for two whole weeks.”

“From our standpoint it’s very important that the students develop their own musicianship and mold their own performances,” said Charles Latshaw, director of the festival. “So to a large extent, we set them loose on the pieces. Chamber music allows you to develop that great sense of self in creating art. And you need to be able to do it with a small group of your peers, which takes a great deal of courage and maturity and confidence.”

Though the students do much of the work on their repertoire alone, they do receive coachings from Kent/Blossom faculty, which includes Cleveland Orchestra members and Kent State University faculty in addition to the Miami Quartet. 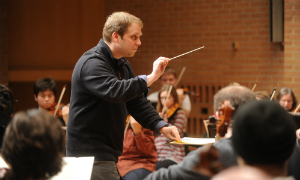 Much of the repertoire that the students perform comes from faculty requests, “pieces that they think the students should be playing,” said Latshaw. So the faculty can be especially helpful in coachings, because “they’ve often performed a piece many times and it’s really close on their fingertips,” said Danna Sundet, artistic coordinator and professor of oboe at Kent State and KBMF. “Those coaches will give them every pointer necessary to do it.”

The students then perform those pieces in eight concerts over two weekends. (The first has already passed, the second is July 18-20. See our concert listings page or KBMF’s website for details.) Each student performs at least one work on each weekend, giving them only two weeks between.

“KBMF is more intense and compact than the normal year,” said Robinson. “It’s your school year on steroids, you pack everything into five weeks.” Cleveland Orchestra assistant principal bassoon and KBMF faculty member Barrick Stees pointed out other contrasts with the academic year. “You’re only seeing them for a few weeks in the summer so there’s not a lot of time for follow-up. It’s a time for introducing the students to some concepts that they might not be aware of, or for saying things a little differently from what they get from their own teacher.”

Students also receive private lessons from faculty while at the festival. Despite its brevity, Stees believes that lessons there are just as worthwile as those in the academic year. “I think the most effective teaching that a teacher does is in the first few lessons, where the student is most receptive because things are so new. The teacher is not repeating himself. The concepts are introduced. It may take a while for them to sink in.”

Though chamber music is the prime focus of the five weeks, students also work on orchestral playing with members of The Cleveland Orchestra through repertoire and technique classes. At the end of the festival, on July 26, they will mount the stage at Blossom for a “side-by-side” concert with The Cleveland Orchestra. At 7PM the students perform under Brad Mitchell, at 8PM, The Cleveland Orchestra performs with Stephen Hough, piano, and John Storgårds, conductor, then both groups come together for Sibelius’s Second Symphony.

“Week five is this huge grand finale, where the students have been working on orchestral things, they’ve been playing chamber music, they’ve been coached by these Cleveland Orchestra members,” said Sundet. “Now they’re going to sit next to those Cleveland members and be conducted by a Cleveland Orchestra conductor at Blossom. They’ve already been attending concerts at Blossom for five weeks, and now they’re the ones sitting on the stage. They go home feeling really great and proud of the work that they’ve accomplished over the five weeks.”

Then the students are off to continue progressing in their careers, hopefully, as Stees said, “with a real feeling of enrichment and enjoyment that comes from playing good music with people.”

Northeast Ohio’s Les Délices has long been that rarest of beasts: a world-class organization so proud of its region (ours) and repertoire (distinct niches in pre-1800 music) that it never tries to be everything to everyone, paradoxically making a strong case for a broad, curious international following. In the December episode of its SalonEra series, the ensemble embraces its strengths and community to marvelous effect. END_OF_DOCUMENT_TOKEN_TO_BE_REPLACED

END_OF_DOCUMENT_TOKEN_TO_BE_REPLACED

Another I remember fondly is Gian Carlo Menotti’s Amahl and the Night Visitors.  Commissioned by NBC, the one act, made-for-television opera, premiered on December 24, 1951, at the network’s studios in New York’s Rockefeller Center. And now, through the wonders of technology, Cleveland Opera Theater has created a magical new production of the work which is available on demand through January 6, 2021 (Three Kings Day). END_OF_DOCUMENT_TOKEN_TO_BE_REPLACED

Jessen has now followed up with her second solo CD, Winter Chapel. Recorded on January 17, 2020 in Oberlin College’s Fairchild Chapel and available on Carrier Records, the album is a continuum in Jessen’s journey to push the musical boundaries of her instrument and herself as an improviser. END_OF_DOCUMENT_TOKEN_TO_BE_REPLACED