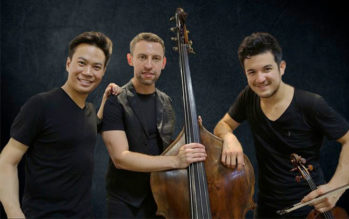 When it comes to groups whose music combines a myriad of musical styles ranging from classical to pop, jazz to bluegrass, and everything in between, there’s Time for Three, and there’s everybody else. On Wednesday, July 13 Tf3 returned to Northeast Ohio for a concert at Cartwright Hall on the campus of Kent State University, violinists Nikki Chooi and Nicholas (Nick) Kendall and bassist Ranaan Meyer once again proving that nobody does it better than they do.

This year’s Kulas Guest Artist, Tf3’s concert was a spectacular culmination to their residency at the Kent/Blossom Music Festival, where they coached student chamber music ensembles, conducted master classes and workshops, participated in a Q&A session, and talked about the entrepreneurial side of the music business.

What’s striking about hearing Tf3 live is not just their inventive original compositions and arrangements, nor their technical virtuosity, nor even their entertaining showmanship. It’s that the pure joy they have for what they do is always front and center.

Inspired by a trip to South America, Ranaan Meyer’s evocative Ecuador opened the group’s eleven-song, 75-minute show. Meyer’s compositional prowess was also heard during In the Dressing Room, a tune written after Tf3 had performed on the hit TV reality show, Dancing with the Stars.

Arrangements of pop tunes included Coldplay’s UFO and Imogene Heap’s Hide and Seek, but it was the haunting performance of Leonard Cohen’s Hallelujah that was a highlight of the evening.

As fans of Tf3 have come to expect, the set also included the group’s signature “mash-ups.” Long time collaborator Steven Hackman and Tf3 band members ingeniously combined Justin Timberlake’s Cry Me a River with the “Adagio” from Samuel Barber’s String Quartet. Those who doubt that music by Igor Stravinsky can share a song with the music of Katy Perry should think again — music from Firebird interwoven with the pop singer’s Firework created musical sparks.

Most surprising was Hackman’s and Tf3’s recent mash-up of Henry Purcell’s “Dido’s Lament” with Led Zeppelin’s Stairway to Heaven. Although this may have the purists at both ends of the musical spectrum scratching their heads, the innovative fusing of styles created the feeling that two long-lost friends had been reunited.

Bassist Ranaan Meyer showed off his jazzy side with an extended riff that began with a quote from Black Sabbath’s Ironman. The improvisation segued seamlessly into a funky version of Vittorio Monti’s Csárdás. Here violinists Chooi and Kendall brilliantly showed off their folk-fiddling chops.

As the mantra goes, always leave the audience wanting more. The audience did, and Time for Three obliged with a fiery performance of Mumford & Sons’ Little Lion Man.

The cimbalom was the feature of the show, an instrument capable of taking on many personas. Its performer, Chester Englander, has shaped his career around the instrument, and has inspired composers to write more repertoire for it, some of which was presented on the program. END_OF_DOCUMENT_TOKEN_TO_BE_REPLACED

You wouldn’t expect that acoustic from a glance at the nave, which is wide and long, but not especially lofty. But when I guest conducted a local amateur choir and professional orchestra in Beethoven’s Mass in C there a few years back, during the first rehearsal we released the final chord of the “Gloria” and listened in astonishment for the next several seconds. The sound continued to roll down the space like the big wave that surfers dream about. END_OF_DOCUMENT_TOKEN_TO_BE_REPLACED