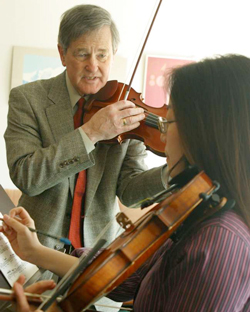 Constructing memorial concerts is a tricky affair. They have to strike a balance between mourning and celebration, incorporating personal stories and meaningful pieces without becoming maudlin. On July 11 in Oberlin Conservatory’s Warner Concert Hall, the faculty of Credo Music successfully navigated these pitfalls for a moving tribute to their friend and fellow faculty member, violinist Stephen Clapp.

Oberlin, under the auspices of Credo, was the perfect venue to honor Clapp’s memory. He graduated from the conservatory in 1961, returned to teach there from 1978-1994, founded the Oberlin Trio, was acting dean of the conservatory in 1985, and was presented with an honorary doctorate in 2011. He served on the faculty of Credo Music from its genesis, fifteen years ago. Beyond Oberlin, Clapp taught at Juilliard from 1987-2007, as well as serving as its dean from 1994-2007.

The concert was divided into four parts: “Lamentation,“ “Collaboration,” “Supplication,” and “Celebration.” Credo’s Artistic Director and viola faculty member Peter Slowik introduced each with touching anecdotes about Clapp, emphasizing his humility and constant service to others.

Steuart Pincombe opened “Lamentation” with a cry from the heart, playing viola da gamba and singing his own setting of Psalm 13. He sang the simple, quasi-medieval melody in an unpretentious tenor, lingering on suspensions and slipping movingly from minor into major in the redemptive last few lines.

After violist Matthew Michelic and pianist James Howsmon performed Zoltán Kodály’s subdued Adagio, Michael Davis and Lee Joiner paired up for three violin duos. Davis’s tone was flute-like in Bartók’s “A Fairy Tale,” which was followed by the anguished dissonances of the same composer’s “Sadness,” an apt piece for this occasion. Donald Erb’s Children’s Song, dedicated to the children of Oklahoma City, was eerily beautiful, with muted glissandos mimicking sirens and glassy harmonics expressing the pain felt at the loss of any life.

Hymns represented Clapp’s humility and devotion to service in “Supplication.” In a last minute addition to the program, cellist Ann Williams and pianist Karen Burgman displayed poignant eloquence in “Savior, Like a Shepherd Lead us,” arranged by Paul Jones. Slowik, also accompanied by Burgman, played feelingly in sincere renditions of “Come Thou Fount of Every Blessing” and “Be Thou My Vision,” both arranged by Burgman.

“Celebration” ended the evening, commemorating and rejoicing in Clapp’s accomplished life. Current Credo students as well as alumni and faculty created a massive sound under Slowik’s conducting in the first and last movements of Ernest Bloch’s dramatic Concerto Grosso for strings and piano obbligato. The final movement, a Fugue, provided a fitting illustration of grief in miniature: beginning in turbulent minor-key sadness, it ends in uplifting major, just as loss leads to a celebration of a beloved person’s life.

Photo by Peter Schaaf from The Strad.

END_OF_DOCUMENT_TOKEN_TO_BE_REPLACED

A new CD by Christa Rakich, who is currently Visiting Professor of Organ at the Oberlin Conservatory, gives a nod in two directions. As its title announces, it’s an homage to her former teacher and colleague, the late Yuko Hayashi, longtime professor at the New England Conservatory and curator of Boston’s Old West Church Organ Series. It’s also the first recording to be made of Richards, Fowkes & Co.’s Opus 16 instrument, built in 2008 for Goodson Chapel of the Duke Divinity School in Durham, North Carolina. END_OF_DOCUMENT_TOKEN_TO_BE_REPLACED

END_OF_DOCUMENT_TOKEN_TO_BE_REPLACED

Hailed by the New York Times as “The Best Classical Music Ensemble of 2018,” Wet Ink Ensemble has lived up to this acclaim once again with their recent release Glossolalia/Lines on Black. The album takes its name from the two extended works by Wet Ink members Alex Mincek (saxophone) and Sam Pluta (electronics). The remainder of the septet includes Eric Wubbels (piano), Erin Lesser (flutes), Ian Antonio (percussion), Josh Modney (violin), and Kate Soper (voice). END_OF_DOCUMENT_TOKEN_TO_BE_REPLACED

Croatian-born pianist Martina Filjak, now living in Berlin, has released her latest album, Light and Darkness, featuring music by Franz Liszt — plus an epilogue by Arvo Pärt. The disc confirms once again all the special technical and interpretive qualities that won her the gold medal at the Cleveland International Piano Competition in 2009. END_OF_DOCUMENT_TOKEN_TO_BE_REPLACED