Debra Nagy and her colleagues of Les Délices usually dedicate themselves to bringing the music of 17th- and 18th-century France alive for modern ears. But this weekend, the period instrument ensemble will push the clock back to the 14th century — not an era of powdered wigs and salons, but a time of knights, crusades, courtly love, and increasing secularization.

“This is our third venture into Medieval music,” Nagy said over coffee in a Hingetown café. “We visited the 14th-century avant-garde a couple of years ago, and last year we collaborated with Boston’s Blue Heron on Machaut’s Remede de Fortune. This program, ‘Intoxication,’ is a Les Délices project, but with many of the same wonderful collaborators. Scott Metcalfe is back. Charlie Weaver was the lute player and Jason McStoots the tenor for the Machaut programs. We’re also working with Elena Mullins, a former student of mine who received her doctorate at Case and now directs the early music singers. She’s a beautiful singer and communicator with a real passion for this kind of music.”

Nagy said that more than half of the music on the program comes from the Chantilly Codex, a large manuscript thought to have been compiled during the last decades of the 14th century. “The music is quite exceptional — highly mannered and written in a complex notation. Belle, bonne, sage, one of two works by Baude Cordier added ten or fifteen years later to the beginning of the manuscript, is famous for its fanciful, heart-shaped notation, and another of his songs was composed in the shape of a circle.” 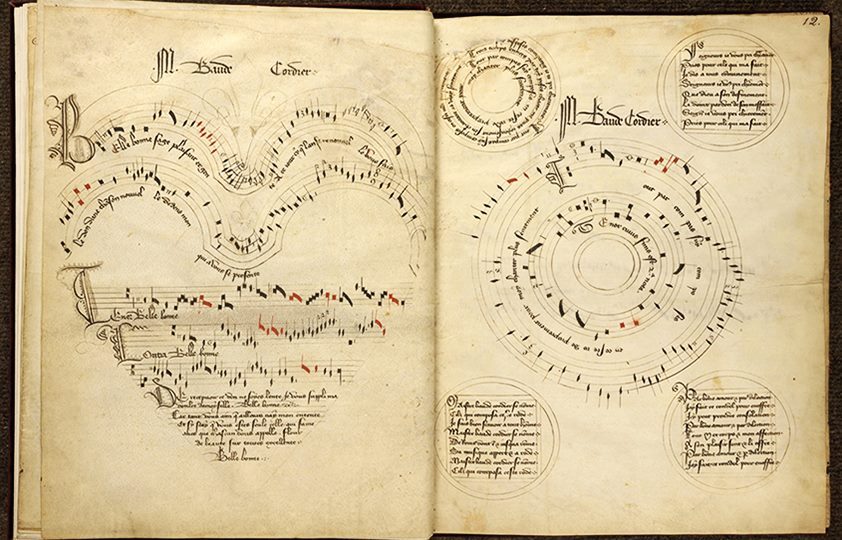 In contrast to Les Délices’ earlier 14th-century programs, which explored the intellectualism of the repertory, Nagy said that “Intoxicating” is all about sensory experience and sensuality, as reflected in the titles of its four sections: Heady Perfumes, Up in Smoke, Bacchanalia, and Elixir of Love. The new program also features music by the mysterious composer Solage. “I think we have a grand total of ten pieces of his that have survived, of which nine are included in the Chantilly Codex and four appear on this program,” she said.

“Normally the only 14th-century composer with any name recognition and any significant body of work is Machaut, so it’s unusual to hear this much music of so many different styles and degrees of complexity by another composer on a single program. The Solage pieces are all really different and show great ingenuity and variety. I think it’s nice to get a sense of his music.”

Solage also provided Nagy with a jumping-off point for curating the new Medieval show. “The smoking pieces were the foundation of the program,” she said, “then it was a matter of being creative and expanding outward. Solage’s Fumeux fume fumée is very famous, and I’ve been wanting to perform Hasprois’ Pisque je suis fumeux for 15 years.”

This weekend’s audiences will notice that Les Délices’ playlist is entirely worldly in nature. “When people think of Medieval music, they think of something very pious, but this is a secular program about human experience — it’s not about what is up there, but what is going on down here,” Nagy said. “These are the works of self-identified free thinkers that reflect the increased secularism of the time, partly brought on by the schism that installed the papal court in Avignon in the 1380s.”

Nagy and her Blue Heron colleague Scott Metcalfe have created the musical editions for the program, a process which includes making decisions about added sharps and flats and whether or not to resolve some extraordinary dissonances that occur in the original manuscripts. Nagy has also done a bit of composing, creating two new Estampies based on 14th-century material. In addition to playing Medieval wind instruments and harp, she will also be singing Solage’s En l’amoureux vergier, which she characterized as “a 14th-century pop tune.”

The 8:00 pm performance on Saturday, January 13 will mark Les Délices’ first performance at its new West Side venue, Lakewood Congregational Church. The program will be repeated at 4:00 pm on Sunday, January 14 in Herr Chapel of Plymouth Church in Shaker Heights (come at 3:00 pm for a pre-concert talk). Tickets are available online.

In addition to the two full-length performances, the ensemble will present abbreviated versions of “Intoxicating” on Friday, January 12 at 2:30 pm at Larchwood Village in Rocky River and 7:30 pm at A Place for Us in Cleveland. And the ensemble will present a family-oriented Medieval Dance Party on Saturday, January 13 at 3:00 pm at the Bop Stop (free, but reservations requested).

Jackson began the program with a recitation of Langston Hughes’ poem “Helen Keller” — the first of five poems by Hughes that served as interludes between each piece on the first half. END_OF_DOCUMENT_TOKEN_TO_BE_REPLACED

Pianos with pins and tape on strings, a bass drum and tam tam, crotales, Almglocken, and vibes. Microphones were hooked up all around the instruments. The feed was sent to speakers around the room. Lighting designer Nicholas Houfek hung incandescent globes over the arrangement of instruments from thin black wires stretching across the beams. END_OF_DOCUMENT_TOKEN_TO_BE_REPLACED

From the podium, Elim Chan set an ambitious tone for the evening. The rising star conductor, here in her Cleveland Orchestra debut, has a commanding style, and every twist and turn in Saturday’s performance tracked closely with her baton. END_OF_DOCUMENT_TOKEN_TO_BE_REPLACED