In what must have been among the most alluring Christmas music concerts of this season, period instrument ensemble Les Délices (Debra Nagy, director) and Quire Cleveland (Jay White, director) teamed up to present French Baroque music for Christmas, highlighted by the Messe de Minuit (“Midnight Mass”) by Marc-Antoine Charpentier (1643-1704).

Guest conductor Eric Milnes led the ensembles from the keyboard of a small chamber organ. I heard the concert in its third performance on Sunday, December 23, at Our Lady of Peace Church in Cleveland. The church was packed, but its many stone surfaces made for an appropriately reverberant acoustic, even with a full house.

Charpentier’s Messe de Minuit incorporates tunes from popular French Christmas songs of the day (“Noëls”) into his setting of the five movements of the Ordinary of the Mass. In the 17th and 18th century, almost everyone in France knew these Noëls and would have recognized them even as Charpentier wove them into the musical texture. (As an organist, I’ve played many settings of the Noëls, so I’m familiar with the tunes and recognized them dressed up in Charpentier’s brilliant garb. But even those unfamiliar with the tunes could still delight in Charpentier’s music.) The moods of the five movements were varied, but tended toward joyous, sometimes even jaunty. There were striking moments of text-setting. For example, in the Nicene Creed, Charpentier repeats the words “Et Homo factus est” (“And was made man”) three times — the heart of the concept of Incarnation.

The performance was all at a very high level. Quire Cleveland’s diction (using Latin pronunciation as it would have been sung in France in the 17th century) and intonation were pristine. Les Délices’s playing was likewise stylish in its phrasing and tasteful ornamentation. The blend between ensembles was impeccable. It was hard to believe that these two groups don’t perform together regularly, such was their unity of style and performance.

The concert opened with Michel Corrette’s Noëls sur les instruments. Corrette (1707-1795) was a generation later than Charpentier, yet their style was similar, with lavish variations on the Christmas tunes and fluent ornamentation. Each of the settings had its own character: joyful, dance-like, a lullaby, a pastorale with a bass drone like a bagpipe. Les Délices captured the spirit of each setting, and oboists Debra Nagy and Kathryn Montoya showed their versatility in also playing recorders of several sizes. 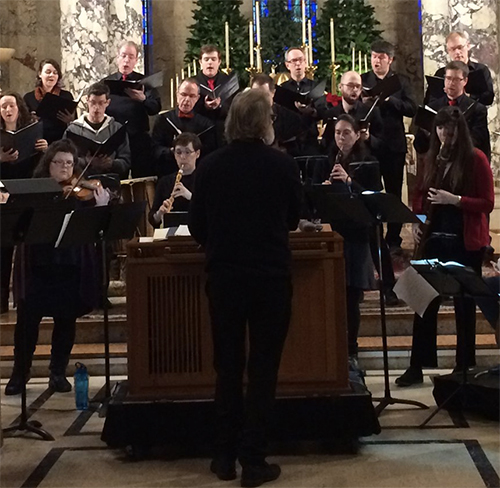 Charpentier’s Dialogus inter angelos et Pastores (“Dialogue between the angels and shepherds”) separated the various Noël settings. The Dialogue, sung in Latin in two distinct sections, is a hybrid between a dramatic cantata and a motet. The first part with text from Psalm 12 is prophecy; the second part is the familiar Gospel of Luke nativity story. The music is elaborate and challenging, clearly composed to highlight the talents of the professional singers and instrumentalists employed by Charpentier at Saint-Louis, his church post in Paris.

The performance of this rarity was very fine in all regards, but special mention must go to tenor Nathan Dougherty and baritone Daniel Fridley. Dougherty sang a now-obsolete voice part found in French Baroque music, the hautcontre, a very high tenor who sings not in falsetto, but in true head voice to stratospheric heights. Here, the hautcontre served as the narrator, providing continuity among the various arias and choruses. Fridley brought a special lyric dignity to Consolare filia Sion (“Be comforted, daughter of Sion”).

Former Quire Cleveland director Ross Duffin contributed three unaccompanied settings of Noëls. Jay White led the performances while also singing with the ensemble. The arrangements were clearly modern and highly imaginative, but maintained the overall French Baroque tone of the songs. Une jeune pucelle tells the story of the Angel Gabriel’s appearance to Mary, ending with the Virgin’s great song of praise, “My soul magnifies the Lord.” Tous les bourgeois de Châtre is in a jaunty triple meter, portraying the citizens of Châtres and Montlhéry dancing and drinking in celebration of the angels appearing to the shepherds and their flocks. The end describes a young boy from Nevers who sang a thousand lovely airs combined with Alleluias to Joseph and Mary. Voici le jour solennel depicts the Magi’s interactions with Herod on their way to pay homage at Jesus’s crib. Duffin’s arrangements are worthy of more performances beyond those of Quire Cleveland, although the lengthy French texts might be intimidating to many choral groups.

If there could be any quibble at all with this concert, it was its generous length, over ninety minutes with no intermission. In a church filled with more 600 listeners, an intermission would have been difficult to manage. But having to sit for that long was far outweighed by the brilliant music-making of Les Délices and Quire Cleveland. We can hope that the success of this venture will encourage future collaboration.

The cimbalom was the feature of the show, an instrument capable of taking on many personas. Its performer, Chester Englander, has shaped his career around the instrument, and has inspired composers to write more repertoire for it, some of which was presented on the program. END_OF_DOCUMENT_TOKEN_TO_BE_REPLACED

You wouldn’t expect that acoustic from a glance at the nave, which is wide and long, but not especially lofty. But when I guest conducted a local amateur choir and professional orchestra in Beethoven’s Mass in C there a few years back, during the first rehearsal we released the final chord of the “Gloria” and listened in astonishment for the next several seconds. The sound continued to roll down the space like the big wave that surfers dream about. END_OF_DOCUMENT_TOKEN_TO_BE_REPLACED