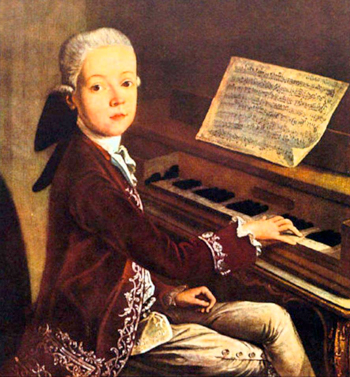 Composer: Wolfgang Amadeus Mozart (1756-1791). Perhaps the most renowned child prodigy in history, Mozart began composing at age four and was playing the piano and violin for European royalty by age six, alongside his elder sister Nannerl. Their father, Leopold, was one of the foremost pedagogues of the era and continued to exert a forceful, overbearing influence on his son’s life. Wolfgang had a lucrative touring career during his childhood. He was employed on-and-off by the Archbishop of Salzburg during his adolescence, and finally moved to Vienna at the age of 26, where he spent the rest of his life.

A notorious party animal, Mozart shocked the upper circles of Viennese society with his behavior and charmed the city’s ears with his divine music. Mozart was a prolific and pioneering composer both of instrumental music (particularly symphonies and concertos) and opera — his two loves. Many of the works written in the last decade of his life are considered to be the apotheoses of Classical style, and some of the greatest artistic contributions to humanity. He died at the age of 35, the cause of which has been subject to extensive speculation (like in the popular play and movie Amadeus).

The Piece: Mozart’s late piano concertos are some of the greatest in the Classical era. His subtle use of form, thematic development, and orchestration set a compositional precedent in piano concertos for over a century. This particular piano concerto is probably Mozart’s most recognizable due to the use of its slow movement in the Swedish film Elvira Madigan.

The orchestra begins the first movement with two introductions before the piano enters. The first is an upbeat, march-like theme, the second an alluring melody. Notice all of the short phrases in the winds, tweeting to one another like birds. Then the piano sneaks in, as if from the shadows, eventually landing on a trill against the first theme. 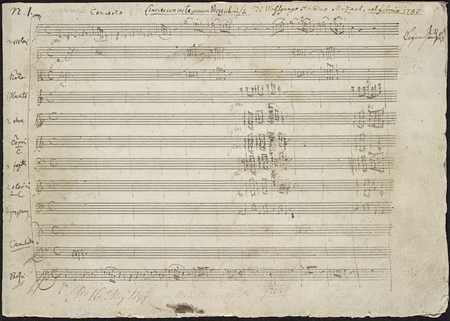 After Mozart takes the melodies you’ve heard so far and has all sorts of fun with them, the soloist plays a cadenza, a section designed to show off the pianist’s skills as a virtuoso. Mozart improvised his own cadenzas in concertos he wrote for himself but wrote out cadenzas for other pianists. The one he wrote for this concerto has been lost, so pianists perform either their own or cadenzas by other composers (the one by Beethoven is quite popular).

As in the first movement, the orchestra begins the second without the piano before the soloist enters, developing the primary and secondary material. Notice that Mozart never allows the music to get dull. Pulsating notes in the piano, winds, and strings add a bit of tension. The melody is a wonderfully sweet one you will probably end up whistling later in the day.

The finale, in rondo form (in which a main theme alternates with contrasting sections), is full of playful running scales and dazzling virtuosic passages, all constructed with a charm only possible in a piece by Mozart.

Personal Notes: Mozart’s great works are difficult to describe. On the one hand, they are powerful and deeply moving, reflecting some of the most beautiful qualities of humanity. At the same time, they exhibit perfect craftsmanship and are both technically difficult and nuanced. They are also filled with wit and undeniably unique charm. Even writing for a smaller orchestra, Mozart is a master of instrumental color. There is an endless supply of positive attributes when it comes to his music — especially its ability to put a smile on your face!