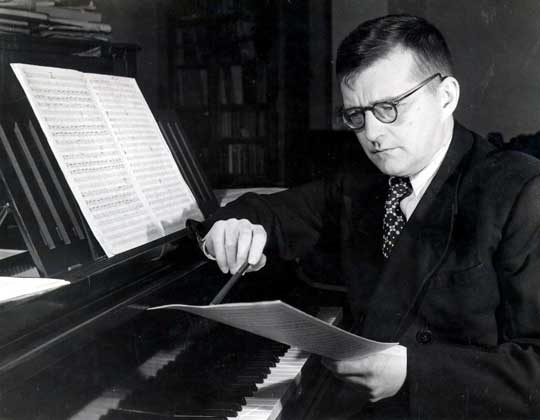 Composer: Dmitri Shostakovich (1906-1975). Shostakovich was one of the most prolific composers of the 20th century. His fifteen symphonies and fifteen string quartets are some of the most important in their genres. He also wrote brilliant concertos, chamber music, film scores, ballets, and operas.

Growing up in the early days of the Soviet Union, Shostakovich showed budding genius with his first symphony, composed while he was still studying at the Leningrad (St. Petersburg) Conservatory. From his 1934 opera Lady Macbeth of Mtsensk (American premiere at Cleveland’s own Severance Hall) onward, his career was marked by clashes with Stalin and Soviet authorities.

There has been much speculation in recent years as to how much of Shostakovich’s music was affected by these clashes, but little consensus has been reached. Soviet life undoubtedly made an enormous impact on him. The authorities sent several of his friends to their deaths, leaving the composer paranoid for a good part of his life. His music, however, is noted as one of the USSR’s greatest contributions to art, and is particularly regarded for its emotional directness and combination of different styles.

The Piece: This string quartet is one of classical music’s greatest — and darkest — works of art. The inscription on the score reads “In Memory of the Victims of Fascism and War.” Some even view it as Shostakovich’s requiem for himself. It was written during a deeply troubling time for the composer, when he had finally, and reluctantly, come around to joining the Communist Party. The work packs an incredible range and degree of emotion into its five movements. 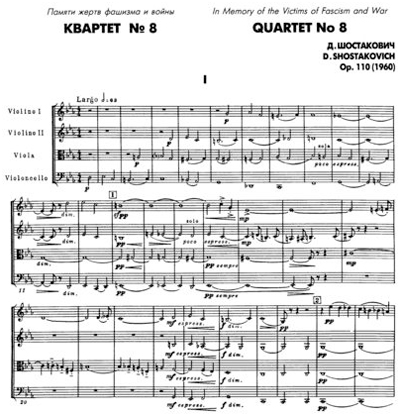 The first movement begins broodingly with a four-note theme known as the “DSCH” motto. This cryptogram of the composer’s name — Dmitri Schostakowitsch, represented by the pitches D-E flat-C-B — unifies all of the movements and makes up a lot of the thematic material in the string quartet. It is a short theme that Shostakovich uses in many of his works, and in fact, there are many quotes in this piece from his other works, too.

After the slow, brooding first movement, the second movement can catch you by surprise with its violent cacophony and demonic shrieking. This brief, but unforgettable section challenges the virtuosity of all four instrumentalists as well. A waltz follows, though unlike the pleasant, swaying waltzes of the Strauss family, this dance has a surreal feeling with elements of the grotesque, as if it were going mad. As it fades away, the fourth movement creeps in like an ominous fog. It slowly grows and appears to transfigure itself, as the DSCH motif appears for the final movement. The motif is turned into a cringing fugue, which eventually dies away — like the victims to whom Shostakovich dedicated the piece.

Personal Notes: Shostakovich’s String Quartet No. 8 is an incredibly touching artistic statement. Some listeners may find it disturbing, but I imagine that this is intentional. The piece demands devilishly difficult technique of the performers, and in doing so adds fuel to the emotional fire. The second movement sounds like the horrors of war, while the third movement is like the maddening after-effects of what war does to a society; notice the over-the-top swooping in the violins, as well as the ear-wrenching pizzicatos. The fourth and fifth movements move on to the graveyard, departing with a depressive, ghostly farewell. 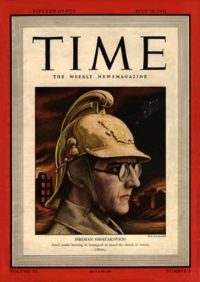