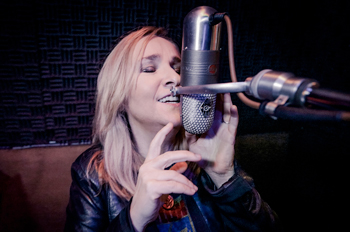 “This concert is going to be one of the most unique things that I’ve ever done,” celebrated singer-songwriter Melissa Etheridge said during a telephone interview. “I’m just so thrilled, excited, and nervous — I’ve got to be on top of my game for this.” On Wednesday, June 7 at 7:30 pm in Severance Hall, Etheridge will join conductor Liza Grossman and her 115-piece Contemporary Youth Orchestra plus a 50-person choir for a concert that will feature some of the legendary singer’s greatest hits, as well as rarely-heard tracks from her multi-decade career.

The evening marks CYO’s eighteenth annual Rock the Orchestra series, which has included artists Tommy Shaw, Ben Folds, Graham Nash, Bootsy Collins, and Jon Anderson of Yes. “I have envisioned this show with Melissa and CYO for more than a decade,” Grossman said during a recent interview. “I saw her tribute to Janis Joplin at the 2005 Grammy Awards. Although she was being treated for breast cancer and was bald from chemotherapy, I was so taken with the way she embraced who she was as an artist. I love her honesty, and that comes through in her music.”

The admiration that Grossman has for Etheridge is also bestowed on the conductor by the Grammy-winning singer. “I’ve got to tell you that Liza is an amazing human being,” Etheridge said. “What she’s bringing to this project is the stuff a musician’s dream is made of. She’s not only gone into my hits, but she’s dug deep into my catalogue and pulled out songs that I haven’t played in years. She chose the song Kiss Me, which is one of my favorites, but only my biggest fans know it.”

While Wednesday’s concert is not the first performance with orchestra the Leavenworth, Kansas native has performed without her band, she said this one is different because of the attention that Grossman has given to the arrangements. “What I love about Liza’s approach is that she didn’t just add strings to what is already on the records. She worked with videos of my live performances. It’s hard to arrange what I do live because it is improvisational. For her to understand what I’m doing and then to put that with an orchestra is incredible.”

Prior to her first rehearsal, Etheridge requested a private meeting with the orchestra and the chorus. “I have a deep belief that music is a contact sport, and the musicians are a team — one voice is beautiful, but when voices come together it can create a memory that will last a lifetime,” she said. “The art of entertaining is about getting everyone to have the same intention at the same moment. I do this with all of my musicians whenever we play. We come together and say that we’re going to do this and it’s going to be fun, and I want these young people to feel like they are on a team.”

In addition to being a musician, Etheridge is also an activist for human rights and environmental causes. Why is it important for her to be vocal about the causes she believes in?

“I made a choice a long time ago to try to walk through everything in life truthfully. What’s unique about my being an entertainer — or an artist, as you say — is that we talk to the press, we talk constantly, we promote. You ask the questions, and I made a promise to myself twenty-five years ago that I would always answer whatever question was asked truthfully. And being willing to do that has made me an activist. Believe me, I’ve never gone out of my way to insist on anything, I don’t think that’s how it works. But I think the best thing I can do is to be an example. To say my truth and then live it.”

Winding up our conversation Melissa Etheridge said that she appreciates the enthusiasm that Liza, the orchestra, and everyone connected to CYO has brought to the project. “The musical opportunity to connect with youth is something that I am amazingly grateful for — I’m really looking forward to it.” And asked about her health, she said, “I’m twelve years cancer-free.”

END_OF_DOCUMENT_TOKEN_TO_BE_REPLACED

A new CD by Christa Rakich, who is currently Visiting Professor of Organ at the Oberlin Conservatory, gives a nod in two directions. As its title announces, it’s an homage to her former teacher and colleague, the late Yuko Hayashi, longtime professor at the New England Conservatory and curator of Boston’s Old West Church Organ Series. It’s also the first recording to be made of Richards, Fowkes & Co.’s Opus 16 instrument, built in 2008 for Goodson Chapel of the Duke Divinity School in Durham, North Carolina. END_OF_DOCUMENT_TOKEN_TO_BE_REPLACED

END_OF_DOCUMENT_TOKEN_TO_BE_REPLACED

Hailed by the New York Times as “The Best Classical Music Ensemble of 2018,” Wet Ink Ensemble has lived up to this acclaim once again with their recent release Glossolalia/Lines on Black. The album takes its name from the two extended works by Wet Ink members Alex Mincek (saxophone) and Sam Pluta (electronics). The remainder of the septet includes Eric Wubbels (piano), Erin Lesser (flutes), Ian Antonio (percussion), Josh Modney (violin), and Kate Soper (voice). END_OF_DOCUMENT_TOKEN_TO_BE_REPLACED

Croatian-born pianist Martina Filjak, now living in Berlin, has released her latest album, Light and Darkness, featuring music by Franz Liszt — plus an epilogue by Arvo Pärt. The disc confirms once again all the special technical and interpretive qualities that won her the gold medal at the Cleveland International Piano Competition in 2009. END_OF_DOCUMENT_TOKEN_TO_BE_REPLACED