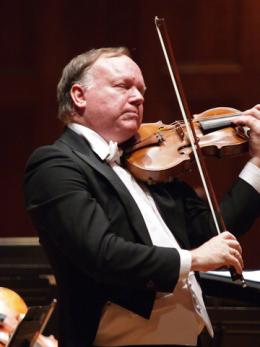 Later this week, 24 young violinists representing eight U.S. States and eight countries will arrive in Oberlin to participate in the eighth edition of the Thomas and Evon Cooper International Competition. Events begin with the semifinal rounds on Saturday, July 15 at 1:30 pm in Warner Concert Hall at the Oberlin Conservatory.

The Competition will continue into next week and culminate with the three finalists playing concertos with The Cleveland Orchestra under the direction of Jahja Ling in Severance Hall on Friday, July 21 at 7:30 pm. (See our concert listings for details about the semi-final, concerto and recital rounds that will determine who plays in the finals.)

First held in 2010, the Competition, which alternates annually between piano and violin, is open to musicians between the ages of 13 and 18. “This will be the fourth time it has been held for violinists,” Competition Director and Jury Chair Greg Fulkerson said during a telephone conversation. “Once again we had around 100 applicants although it is hard to pinpoint the exact number because of the preliminary competitions we held last year in China and Norway.”

Fulkerson noted that because of the Oslo event there are more competitors from Europe this year than in the past. “We also have a better presence from the New York City area as well as a good representation from Chicago and California.”

In addition to the grand prize of $20,000, second and third prizes of $10,000 and $5,000 will be awarded. Each finalist’s prize package also includes a full four-year tuition scholarship to attend the Oberlin Conservatory of Music. At the conclusion of the Recital Final round on July 19, awards of $1,500 will be presented to each of the fourth-through sixth-place finishers along with an Audience Prize of $500. The total purse of $40,000 represents the highest-valued prize package of any competition for this age group.

While the prize-money is an incentive for young musicians to apply to the Competition, Fulkerson said that the opportunity to perform with The Cleveland Orchestra on the Severance Hall stage is a huge draw. “It’s not just how good it looks on their resumes,” he said. “Performing with the Orchestra will be one of the first times they will get to experience something in which everything is better than they could imagine. They really don’t know what an orchestra is capable of doing, so it’s an unforgettable moment when we get to the finals and see the kid’s faces light up.”

We spoke to contestants Kiarra Saito-Beckman and Christina Jihee Nam.

From the time she heard Hilary Hahn perform Tchaikovsky’s violin concerto with the Oregon Symphony Kiarra Saito-Beckman knew she wanted to be a violinist. “I was twelve years old, and like many violinists I know, it was the first piece that made me fall in love with the instrument,” the eighteen-year-old recalled during a telephone conversation from Meadowmount School of Music. Later this week the Bend, Oregon native will begin her quest to perform Tchaikovsky’s concerto with The Cleveland Orchestra.

Entering her junior year at the Cleveland Institute of Music, Saito-Beckman studies with Jaime Laredo and Jan Mark Sloman. She has won numerous awards and competitions, including semifinal honors in the 2016 Stulberg International String Competition. She has made solo appearances with the Las Colinas Symphony Orchestra, Symphony Arlington, Garland Symphony, Charleston Symphony Orchestra, and the Coeur d’Alene Symphony Orchestra. The violinist is a recipient of the Jack Kent Cooke Young Artist Award and an eight-time recipient of the Young Artist Scholarship provided by the Sunriver Music Festival.

A veteran of the competition circuit, Saito-Beckman said that her decision to enter the Cooper Competition was an easy one. “It presents a fascinating opportunity for me — the finals are with The Cleveland Orchestra. I also have many friends at Oberlin and go there frequently. And because it’s so close I realized that I can’t not do it.”

Raised in a musical family, Saito-Beckman chose to earn her GED at sixteen rather than finishing high school. “When I was fifteen I was starting to think about auditioning for schools. So I did that with the support of my teacher and my parents because they thought that it would be a good idea for me to study more intensively. Pursuing music was my dream and they told me to follow it.”

When asked about her Competition repertoire choices she said that learning the Allegro assai from Beethoven’s Sonata No. 8 has been a challenge. “It’s been pushing my boundaries as a musician to think in that Classical style. I chose it because it is one of those sonatas that I heard a lot growing up and I’ve always liked it.”

About Paganini’s Caprice No. 5, she said “I have a love-hate relationship with him. He’s one of those composers who’s an absolute genius. His caprices are not only etudes, they are pieces of art. But, to play them artistically is one of the most difficult things you can possibly do on the violin. The challenge is making the difficult passages sound like more than just notes. And if you do that, it is rewarding to hear.”

In addition to her musical studies, Saito-Beckman is minoring in photography at CWRU. Although she aspires to be a soloist, she said that being at CIM has opened her eyes to the wonderful world of chamber music. “I’m very open and I don’t think there is much I wouldn’t be willing to do as a musician. I just hope to grow as an artist and that doors that will open for me as I go forward with my education.”

Christina Jihee Nam made her debut with the Cincinnati Symphony Orchestra at age nine. She’s appeared on NPR’s From the Top and is a full-time student at Walnut Hills High School in Cincinnati.

Like Saito-Beckman, Nam is also attending Meadowmount this summer and will be returning to the school after the Competition. At Meadowmount, she studies with Jan Sloman, someone who she says has been a wonderful mentor. “It’s my first time here, and it’s been a great experience for me so far,” she said in an email. “There are so many great people, especially the faculty.” The violinist has been clocking five hours of practice each day. “I get opportunities to perform all my pieces for Cooper in masterclasses as preparation for the Competition.”

Nam was enamored with the violin from a young age. “When I was three years old, I heard my aunt play her violin in Korea. I started begging my parents for a violin after that,” she said. “As a birthday gift, they registered me for violin lessons when I was four.” The young musician also grew up with music in the house, listening to recordings of violinists like Sarah Chang, Midori, and Jasha Heifetz.

She currently studies with Kurt Sassmannhaus, describing him as one of the biggest influences on her development as an artist. “I’ve studied with him since I was seven years old. He’s taught me pretty much everything I know about violin technique, and how to be the violinist I am today,” she said. “He has given me many performance opportunities, and those are important to any music student.” Nam also studies with Amy Lee, associate concertmaster of The Cleveland Orchestra. “Not a minute of my lessons with her is ever wasted. She has so much energy, which she passes on to me.”

Though only 14, Nam has racked up many achievements throughout her career, recently completing a five-city tour in China. The musician has also had a busy year. “I played various concerts in the Cincinnati Starling program, and besides those, I played the first movement of Tchaikovsky’s Violin Concerto with the Butler Symphony Orchestra as a prize for winning their Young Artist competition.” She also participated in the Innsbrook Institute in Missouri.

How does the young musician balance being a full time high school student and playing violin? “It’s very challenging, especially when the demands are very high,” she said. “I usually get homework done right after school, then I practice later. I also fit in time to practice at school during my study hall.” When Nam has precious free time, she enjoys arts & crafts, and winter sports like skiing and ice skating. “I also love to eat,” she said.

The Cooper Competition is the next big event for Nam. “I’m kind of nervous because there is a lot of repertoire in the semifinals that requires stamina,” she said. “But I’m very excited to meet the competitors and share my passion for music.” She’s especially excited to perform Waxman’s Carmen Fantasie, one of her favorite pieces. “There are so many dramatic mood changes and I love it. Even though I’ve been working on it for a long time, I haven’t gotten tired of it.”

Even though Nam plans to pursue a solo career, she also enjoys playing in chamber music groups or with an orchestra. “I love playing with my peers.”

Jackson began the program with a recitation of Langston Hughes’ poem “Helen Keller” — the first of five poems by Hughes that served as interludes between each piece on the first half. END_OF_DOCUMENT_TOKEN_TO_BE_REPLACED

Pianos with pins and tape on strings, a bass drum and tam tam, crotales, Almglocken, and vibes. Microphones were hooked up all around the instruments. The feed was sent to speakers around the room. Lighting designer Nicholas Houfek hung incandescent globes over the arrangement of instruments from thin black wires stretching across the beams. END_OF_DOCUMENT_TOKEN_TO_BE_REPLACED

From the podium, Elim Chan set an ambitious tone for the evening. The rising star conductor, here in her Cleveland Orchestra debut, has a commanding style, and every twist and turn in Saturday’s performance tracked closely with her baton. END_OF_DOCUMENT_TOKEN_TO_BE_REPLACED