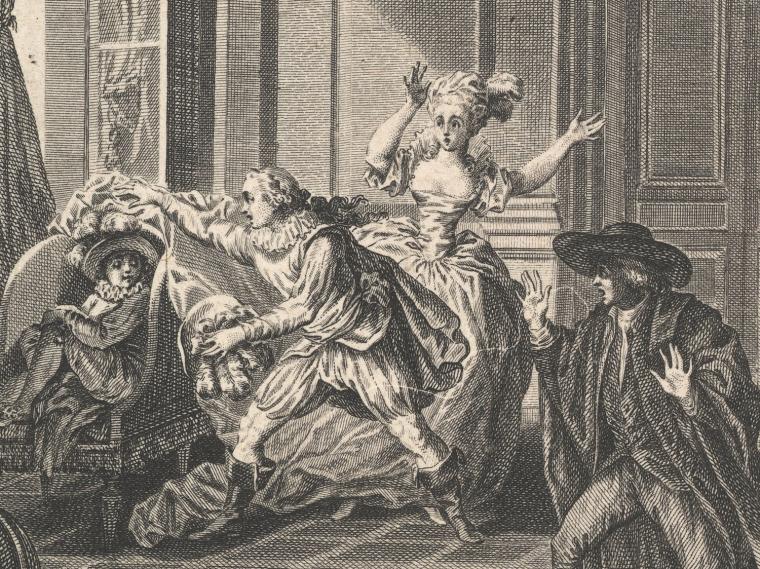 A mainstay of the opera repertoire, The Marriage of Figaro is the first of Mozart’s collaborations with librettist Lorenzo Da Ponte. The plot is filled with mistaken identity, surprise paternity, and intrigue, as the servants Figaro and Susanna triumph in marriage while comically thwarting the attempts of the philandering Count Almaviva to seduce Susanna.

Raphael Jiménez will lead the Oberlin Orchestra and cast at 8:00 pm on Wednesday, Friday, and Saturday, November 1, 3, and 4, and at 2:00 pm on Sunday, November 5 in Hall Auditorium. The opera will be sung in Italian with English supertitles. Click here for ticket information.

Figaro is a social commentary about the lower versus the upper class — servants outsmarting the aristocracy. “The plot of this opera is as current as #metoo,” Oberlin Opera Theater director Jonathon Field said during a recent conversation. “It is about men who are in positions of power and assume that gives them the authority to sleep with whomever, whenever they want to.”

Based on a comedy by Pierre Beaumarchais, a Frenchman, with libretto by an Italian, music by an Austrian, and a story that takes place in Spain, Field noted that “there is not a single cultural building block  in the opera. While the piece plays within certain conventions and styles, what Mozart was trying to do was to accurately capture what was going on in society: the hypocrisy that results when the leaders say they are following one set of ideals but not actually living up to them.”

Field said that unlike many of his shows, this one is a straightforward period production. “I’ve tried to be more realistic with the opera’s details, so I took my old score with all of my notes, threw it out, bought a new one, and started from scratch. What I’m looking for this time is for the director to be completely invisible.”

How has re-examining the score translated to his staging of the opera? “What I discovered is something I’m calling the ‘Mozart fermata’ — things are moving along musically and all of a sudden everything stops,” he said. “It’s not really a musical fermata but a dramatic one. When that happens, things turn and change. If you can figure out the reason for it, you can figure out what to do with each character’s staging.”

The director said his new production is a mix of comedy and tragedy. “The Countess is a tragic character. At the beginning of Act Two, Susanna has just told her that the Count is trying to take advantage of his position and sleep with her before her wedding night.”

Although the libretto is well-written, Field said that it is the genius of Mozart’s music that makes the opera a masterpiece. “The ensembles are amazing! The famous second-act Finale is a brilliant composition. It starts with two people, then three, then four, and keeps adding more and more until there is a trio and a quartet. The quartet is a vocally tight group, but Mozart splits the trio of the Countess, Susanna, and Figaro apart.”

Does Jonathon Field think The Marriage of Figaro is the “perfect” opera? “I’m not going to say that it’s perfect, but I will say that it is one of the rare operas that not only the critics like but the public likes too.”

END_OF_DOCUMENT_TOKEN_TO_BE_REPLACED

Concerts cancelled in 2020 may have put a brief gap in Ling’s record with the Orchestra (a program every season since 1984-1985), but the ensemble’s former resident conductor more than made up for it Sunday with a performance both commanding and personal. END_OF_DOCUMENT_TOKEN_TO_BE_REPLACED