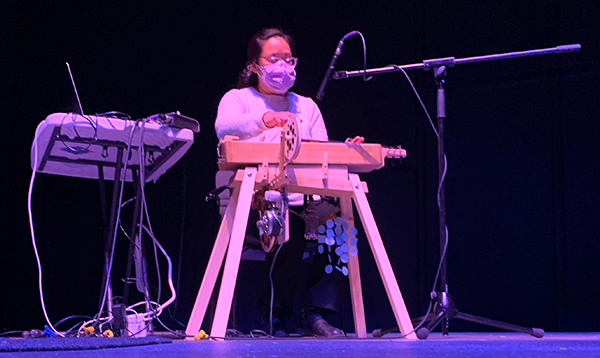 On March 12, the audience was invited to sit on the floor in the middle of Wurtzel Theater for a program of compositions and soundscapes created by faculty members of Oberlin Conservatory’s TIMARA (Technology in Music and Related Arts) program. This was the first public presentation of their work since March 2020.

Each piece was individually introduced by the artist. After telling us a little bit about what we were about to hear, the environment changed: colorful washes of light fell over us, and we became surrounded by music.

Field recordings and electronic recreations of sounds the artists had heard were fitted to the architecture of their compositions. One included a choreographed dance and a hammered dulcimer, brought out from the dust of a closet after being stowed away for more than a decade.

“I like the idea of this being story time,” Aurie Hsu said as she took her seat at her instrument, a one-of-a-kind mechanism resembling a violin and steel guitar. Once the switch was flipped, a plastic thread looped around the instrument, which emitted sound when the strings were pressed. Hsu improvised over a pre-recorded track, sitting beside her computer and leaning over the instrument, the audience seated on the ground looking up. As she pressed the thread on the string with her right hand, her left slid over the fingerboard for glissandi and harmonics. Throughout, she would pass her hands along the cymbals and chimes that dangled underneath.

Following Hsu’s piece was a one-minute elegy by Abby Aresty for a pioneer of electronic music. Then Eli Stine suggested we shut our eyes for Where Water Meets Memory. In this cinematic composition, birds flew across the sky, and synths and water lapped over the muffled recording of dramatic, sustained chords from a violin. Children played along the shore. Bringing together a soprano voice and the grounded voice of the cello, a lovely sympathetic relationship was created. The moments of beauty were made to offset the anxious rhythms of the water, and the fear that emerged in moments of violent bass synthesizers. The piece ended in shimmering serenity.

Describing the sound he created for Song for Circular Space, Peter Swendsen gave the audience the image of a bell. The lights turned green. It looked like a film of sand was spreading across the floor. Rounded notes arrived, left, and did not fully disappear before circling back again. The notes traveled up and down the bell, becoming fuller, then more hollow. At one point, the sound fell to the floor and gyrated like a dropped coin.

Anya Yermakova, a visiting professor, brought two soundscapes she had collected with oceanographers around Victoria, BC, Canada. In the first piece, crackling crustaceans, conversations of noises and voices, and the rhythms of the water were paired with video projections of the researchers and the seascape. Using hydrophones to capture the dense subaquatic sound waves, Yermakova intensified the scientists’ adventures and the mysteries still swimming in the deep, then grounded us with raven calls inland. 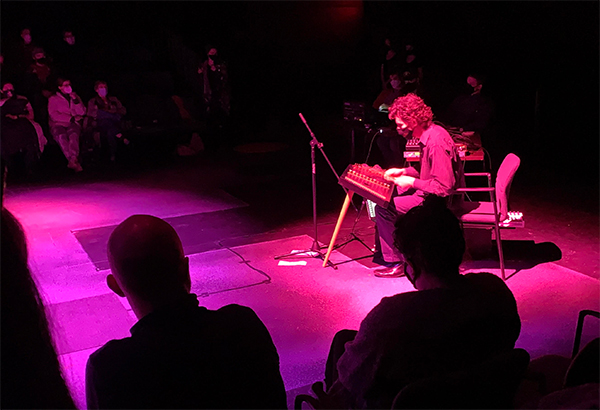 To end the program, Tom Lopez looped and layered notes on a hammered dulcimer, which created delicate, swelling, and cascading sounds. The music accompanied a dance choreographed by his wife, Holly Handman Lopez, featuring herself and their daughter. Set under rose and violet light, Love in the Time of COVID told the story of a relationship between mother and daughter, the identity they share, and the identity that the daughter was creating for herself. In a lovely punctuation during the choreography, the girl wrote notes on blue paper, folded them into airplanes, and sent them flying across the floor. Her mother picked them up and read them in the order in which they landed, before one final dance — an attempt at setting free, and an embrace.

Lopez said he used the solitude imposed by the pandemic to hit a creative reset, something that was palpable through every work on the program. Though an environment was created around each piece — by using surround sound, changing the color of the lights, projecting video on the wall, and choreographing a dance — all of the music stood on its own merit. It was all beautiful.

Photos by the author.